Lawsuit to the Supreme Court being prepared-

Responding to a report from a New Orleans law firm hired by the Utah Legislature to do a legal analysis of Utah taking away the public lands of the United States, the legislature has ordered the preparation of a lawsuit to do that.

In the past several years the Utah legislature has demanded title to most of America’s public lands in Utah. They even set a deadline. It was ignored by the U.S. government. Most recently they commissioned a New Orleans law firm, the Davillier Law Group, to do a legal analysis of their chances getting what they want by directly approaching the U.S. Supreme Court.

Daviller just responded with an analysis.

They concluded “Based on [our] review and evaluation, it is the opinion of the Legal Consulting Services team that legitimate legal theories exist to pursue litigation in an effort to gain ownership or control of the public lands.1  We caution, however, that litigation is time consuming, expensive, and never certain in outcome. We further caution that the federal government will most likely vigorously oppose this effort, raising substantive and procedural hurdles to achieving such an outcome. In the interest of preserving attorney client privilege, this public document does not discuss all anticipated defenses and counterarguments thereto.”

While this doesn’t appear to be a strong endorsement of a lawsuit, the legislature (actually their committee, Utah Commission For The Stewardship Of Public Lands) just voted 6-2 to prepare a lawsuit. Its estimated cost is $14-million. It was a party line vote — Republicans against the Democrats. The two Democrats, Joel Briscoe and Jim Dabakis, strongly objected to the decision. According to the Salt Lake Tribune, they said, ” ‘We believe in real stewardship — not sales or leases to the highest bidder,’ Briscoe said in a statement released by the party. ‘ The commission spent the last year complaining about the federal government and supporting the illegal acts of a single county commissioner,’ a reference to the commission’s efforts to fund a legal defense for Phil Lyman against criminal charges arising for his motorized protest into Recapture Canyon.” San Juan County Commissioner Lyman was convicted on May 15 by a jury for conspiracy and driving on public lands closed to motor vehicles.  The federal court will sentence him on Dec. 18. 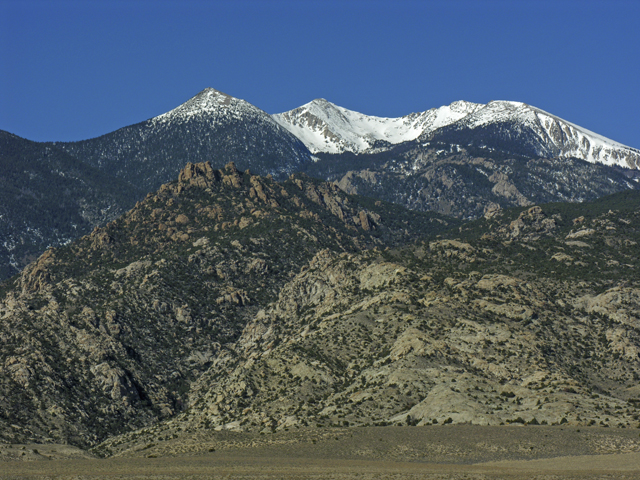 The Deep Creek mountains of western Utah. They are U.S. public lands managed by the BLM. They are part of the 30-million acres demanded by the Utah Legislature. Copyright Ralph Maughan

Republicans argued that Utah is just trying to regain its sovereignty and that the money from the transferred public lands would help Utah’s problems funding public education.

Utah, nor any Western state, has ever owned the U.S. public lands inside its borders. Those who want the states to own U.S. public lands, always referred to as “federal lands,” often claim that Western states do not have “equal footing” with other states because of the national forest and BLM lands inside their borders. The courts have ruled that equal footing does not apply to matter of U.S. ownership of lands.

Proponents of taking the public lands have claimed that a great deal of revenue would flow to Utah if they were devolved to the state. However, a study commissioned by the legislature to some university economists found that Utah would only come out in the black if oil prices (and so revenues from public lands) remained high. More likely the study said Utah would lose $284-million a year trying to manage the former U.S. public lands.  Since the study came out a year ago, oil prices have collapsed. This has not affected the arguments of the land transfer advocates in Utah.

Opponents of the land transfer have argued that when the state cannot make money on the lands, they will sell off the former national forests, etc. to the highest bidder.

In recent months, most of the Republican candidates for President have come in favor of the land transfer, or “land grab” as  Democrats, conservationists and many hunting groups call it.
– – –
Editorial cartoon in the Salt Lake Tribune