This happened near his home but on public land (BLM) just east of Pocatello. The device, named an M-44, explosively releases a powder infused with sodium cyanide (think of executions in gas chambers) when the “capsule holder” of the powder is tugged.

The intent is to kill an animal that tugs on the bait. Those who deploy M-44s most often hope this will be a coyote; but any other medium sized animal, wild or domestic, might be killed. Kills other than the intended species are called “non-target” mortalities. People too can be killed by the cyanide. No one has been killed by an M-44, but a number have been accidentally injured, including Mansfield who was treated at the Portneuf Medicare Center’s emergency room, and was told to return daily for checking blood toxicity levels

Back in 2003, an ATV rider near Vernal, Utah, came across an M-44. He thought it was instead a survey marker on public land. When he examined it, he got his face full of cyanide. He quickly became very sick, and he still suffers today from the incident. People were killed older versions of the device. They were then called “coyote gitters.”

I won’t recount all the other cases, but in an article in the Sacramento Bee from 2012 on the use of poison for predator control by the federal agency Wildlife Services (WS) we learn, “since 1987, at least 18 employees and several members of the public have been exposed to cyanide when they triggered” M-44s.

The Western Watersheds Project (WWP) is all too well acquainted with Wildlife Services and its predecessors. What a sorry outfit! In our blog, The Wildlife News, readers have reported injuries from these devices, formerly called “coyote getters,” as far back as the 1950s. As for wildlife that is not an herbivore, WS has been merciless.

The wounding and death of pets, usually dogs, is common. Just a week before the Pocatello tragedy, two pet dogs, Abby and Molly, were killed in the same way during a walk with their families in Wyoming.
Besides cyanide used by Wildlife Services to kill what they hope are animals that sometimes attack livestock, they use a poison named “compound 1080.” The chemical name is sodium fluoroacetate. It is very poisonous. Divided into doses, a teaspoon of it could kill 100 people. Sodium fluoroacetate is also colorless, tasteless, and odorless. It dissolves easily in water. It too is mostly used to try to kill coyotes, but it is a general animal and human poison.
These characteristics of 1080 would unfortunately make it a perfect human poison for terrorists to use. They could just drop a can’s contents in the water supply. Strangely efforts in Congress to ban it to reduce the risk of it being used to kill us failed in 2012.

1080 is put in collars on sheep, and when a predator bites the throat of the animal, it gets a mouthful of 1080. Thirty minutes or so afterward, the animal begins suffering muscle tremors. Then comes frenzied running, urinary and fecal incontinence, and seizures. It dies slowly. Pets dogs have also fallen victim to 1080. Aside from coyotes, the most common attacks on sheep come from feral and domestic dogs.
Lawbreakers have also used 1080 to illegally poison wolves in Idaho and Colorado. Their anti-wolf efforts have killed many more pet dogs than wolves. The dogs found the poison bait first, although secondary poisoning happens too. An animal that eats from a carcass killed by the persistent 1080 often also dies of 1080.

Many countries have banned 1080, and so have many states.

We at the Western Watersheds Project (WWP) want use of 1080 stopped as well as its manufacture. M-44s too should no longer be used anywhere. This is hardly a new proposal. In fact, these were banned on our public lands by President Nixon back in 1972, but lobbying by the livestock industry in the period from 1976 to 1981 sneaked the poisons back into use. WWP has fought to have their use on public land ended in Idaho and the rest of the states, and last year Wildlife Services agreed not to use M-44 bombs on public lands, but the Mansfield case shows that this is not being followed. 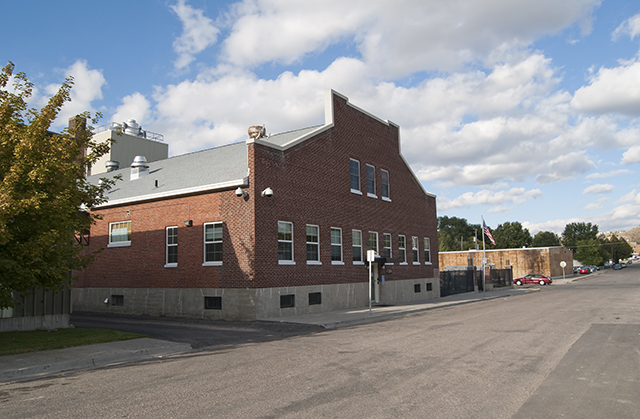 Back In the beginning, federal predator control was carried out by the Bureau of the Biological Survey. This name, just like the name Wildlife Services, functioned as a kind of camouflage. In the 1930s the name was changed to the more honest Predator and Rodent Control (PARC). Later it became Animal Damage Control (ADC). In 1997 it became Wildlife Services.
The predator control function of the federal government has also been kept hidden by locating it deep within agencies in the Department of Interior or Department of Agriculture (USDA). Nonetheless, the beneficiaries of predator control such as public land ranchers have always been able to find it and give it political support when the public becomes aware and angry such as right now in the case of Canyon Mansfield and his poisoned Labrador. This invisibility serves to make it generally immune to reform or elimination.

One largely invisible place in the system of Wildlife Service’s predator poisoning is here in Pocatello. It has existed next to the railroad tracks since 1933. I learned of it about a decade ago. The Pocatello Supply Depot on South 2nd and Dillion is just a mile as the wind blows from my home. They began assembling poison baits and devices for PARC 80 years ago, and it continues today for Wildlife Services. They use the Depo’s devices throughout the country in places they are legal.

Is this facility safe? Perhaps, but the Western Watersheds Project thinks it should be opened for public inspection and shuttered as we get M-44s and 1080 banned. WWP urges you to contact Idaho’s senators and Representative Mike Simpson to demand a ban. Ultimately the problem of the government poisoning pets, wildlife, and people has always been traced to Congress, specifically its members from public land states like Idaho.