What will this mean with 4 domestic sheep bands scheduled to turn out on top of the Phantom’s home range in the next week ?

Idaho’s Phantom Hill Wolf Pack has lost its alpha male, B333. He was hit by a vehicle north of Ketchum over the weekend and was found dead by Ketchum resident Lynne Stone on Sunday, June 14th. Stone said she had been watching two other Phantom wolves earlier that morning, chasing cow elk and a bull moose, when she got a tip that a wolf was laying dead near Baker Creek.

“I’m stunned and saddened for B333, a grizzled older wolf that we nicknamed “Papa”, and I’m especially concerned, more than ever, for his pack” Stone said.

“This is an especially terrible time for the Phantoms to lose B333, because three sheep bands (over 7500 sheep) are coming onto Sawtooth National Forest allotments north of Ketchum — into the pack’s home range — in the next few days,” says Stone. “I saw two Phantom yearlings this morning in the area where B333 was killed. By Saturday, there will be 2500 sheep there.”

During March, ten black Phantom Hill Pack wolves were seen almost daily by residents of the Wood River Valley, as the Phantoms hunted large herds of elk that winter from Hailey to Ketchum, and also near the resort villages of Elkhorn and Sun Valley.

Until a week ago, the pack had consisted of the alpha pair, a three-year old named Judith, a two-year old called “Shadow”, six yearlings, and this year’s pups. However, Stone says there’s a report that a two-year old black wolf was shot by Wildlife Services in the upper Sawtooth Valley, a few miles from Galena Summit a week ago.

Stone says she fears that this wolf might have been the beautiful Phantom called “Shadow”.

“There are no black wolves in the Galena Pack, which is the Sawtooth Valley’s resident pack,” says Stone. “I saw the Phantoms in the Salmon River Headwaters several times last summer and fall.”

B333 was an older wolf and his origins are unknown. He was trapped and collared by Wildlife Services in Summer 2007. 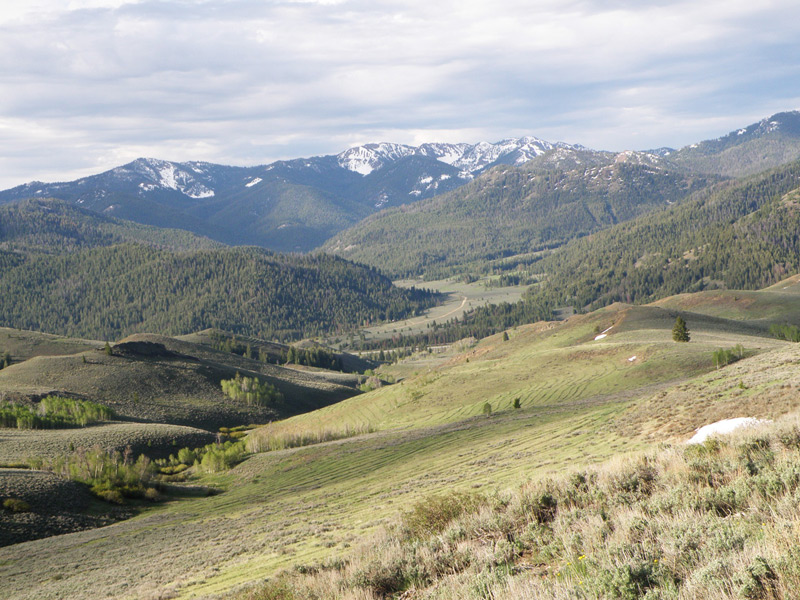 Baker Creek in the Smoky Mountains, north of Ketchum, Idaho. Phantom Alpha B333 was killed on Highway 75 near here on May 13th. Photo by Lynne K. Stone © 2009

The Idaho Department of Fish and Game picked up B333’s carcass late Sunday night, and it’s expected there will be a necropsy, which eventually should provide information about B333’s age and genealogy.

Defenders of Wildlife will have four people, working in shifts, for their Phantom Hill Pack project, now in its third season, trying to keep the Phantoms from sheep and sheep dogs in the upper Big Wood River watershed.

“I wish the Defenders folks well, and I also wish there was money for someone to try and keep wolves out of cattle and sheep in the Sawtooth Valley”, says Stone. “If the Phantoms go over Galena Summit and kill any sheep or cattle, then we could lose a lot of Phantom wolves quickly.”

Wolves are relatively more safe near the Wood River Valley were support for wolves is widely known.  Should Wildlife Services kill wolves near Ketchum, wolf supporters are likely to raise hell.  But if the Phantoms move into the Sawtooth Valley, hostile public land ranching operations threaten the pack.  Wolf killing has already started in the Sawtooth Valley this year, just over the pass.