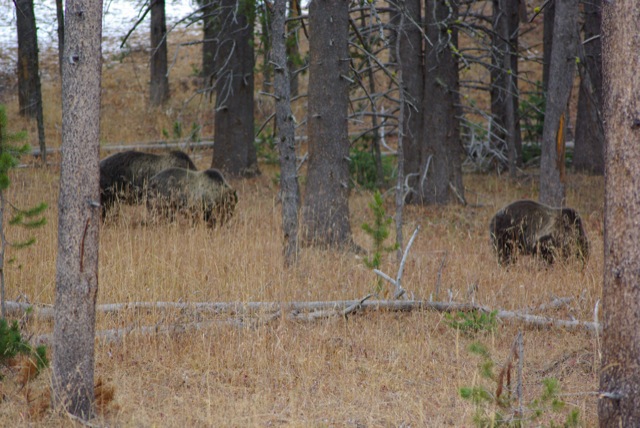 DNA is a powerful tool.

Preliminary results of saliva from one of the bite marks where a female grizzly bear bit a hunter on June 28 returned a match to a radio-collared grizzly with three cubs.

The hunter was one of three eastern Idaho black bear hunters who got an unpleasant surprise on the morning of June 28 when their hounds surrounded a female grizzly with cubs.

The bear took after the hunters, knocked down Keith Klingler, 38 of Idaho Falls, bit him on the right arm and tossed him around. His brother, Eric Klingler dug his .44-caliber Magnum handgun out of his pack and took a shot at the bear, deliberately firing high to avoid hitting his brother.

He may have missed or only inflicted a flesh wound. A scheduled Idaho Fish and Game grizzly bear monitoring flight in early July in the same area located the collared bear and her three young cubs. All four appeared fine, said Daryl Meints, regional wildlife manager for the Upper Snake Region of Idaho Fish and Game.

Keith Klingler was treated at Madison Memorial Hospital in Rexburg for lacerations to his right arm. He had no other apparent injuries.

The Klingler brothers and Corey Raichart, all three from the Idaho Falls area, were hunting black bears with hounds on Bishop Mountain near Harriman State Park. They released their hounds on a scent, and the dogs soon surrounded what the men thought was a black bear. When they arrived, they quickly realized they had a grizzly.

The hunters reported seeing two cubs with the female grizzly. None of them noticed whether the bear was wearing a radio-collar.

Fish and Game officials will continue weekly monitoring from the air, but they do not plan to track the bear on the ground unless they get a mortality signal. Officials also recommend that anyone heading into the backcountry carry bear spray.

84 Responses to Island Park Grizzly that Attacked Hound Hunter Found Alive and Well with Her 3 Cubs.