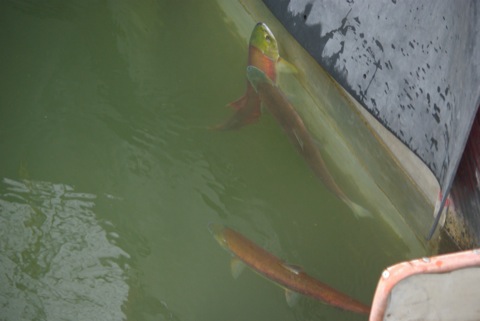 Last year was a record for modern times when 909 Sockeye Salmon passed over Lower Granite Dam and 450 plus 650 returned to the Sawtooth Valley. This year there have been 914 so far and the run is not over. There was a year when only one male made the 900-mile journey. He was dubbed Lonesome Larry.  In 1990 there were none.

To put this year’s and last year’s returns into perspective I grabbed this from the IDFG Fact Sheet on Sockeye:

“Between 1991 and 1998, only 16 wild sockeye salmon returned to Idaho. All of these adults were incorporated into the captive breeding program and spawned at the Eagle Fish Hatchery.