Looking Back Two Decades On Managing The Greater Yellowstone Ecoystem The battle over Mt. Jefferson in Tester’s Wilderness bill

More about the Thanksgiving Wolf Massacre of the Basin Butte Pack

Last week I received a fundraising email from Living With Wolves, a 501c3 non-profit group run by Jim and Jamie Dutcher, who’s mission is “dedicated to raising awareness about the social nature of wolves, their importance to healthy ecosystems, threats to their survival and the essential actions people can take to help save wolves”. In the email was a story about the massacre of the Basin Butte Pack over Thanksgiving which shed some light on the aftermath of the incident. I asked them to put this on their website so that I could post it here.

Warning there are graphic images of a dead wolf.

I was part of the “recovery” team on Dec. 11th that found B171 Alpha Fe in Goat Creek Meadows in the Sawtooth Wilderness. I put my wolf tag on her, hoping that one less wolf would be killed in the Sawtooth Zone. I phoned the IDFG wolf kill number and reported it. Several days later I called local IDFG to “process her”.

Unfortunately, IDFG took her away from me, saying that any wolf killed by Wildlife Services is property of the state. IDFG has not heard the end of this yet. Alpha Fe is in Jerome. I am filing state records request every few days to know what IDFG has planned for her … if I can’t get her back (lawyers are being consulted since WS left her in the woods, not wanting her), then maybe eventually she will go to auction. She was a magnificent, beautiful wolf, even when the life had gone out of her. I am so heartsick over this. I tried for four years to keep this pack alive and it’s a miracle they lasted as long as they did – due to the hatred of wolves of Challis ranchers who run a sloppy cattle business near Stanley from June to Nov. 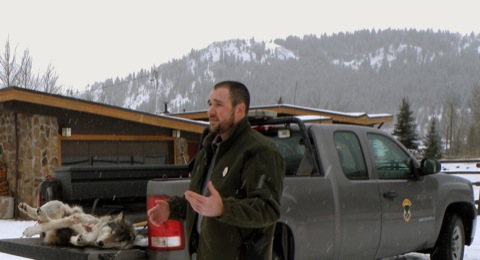 IDFG Conservation Officer Merritt Horsman, explains to Lynne Stone why she cannot keep possession of Basin Butte wolf B171 "Alpha Fe". The wolf was shot by Wildlife Services on November 24th, and left to rot in the Sawtooth Mountains. Stone retrieved B171, wrapped a wolf tag around her leg, and intended to use her for educational purposes. © Lynne Stone, 2009