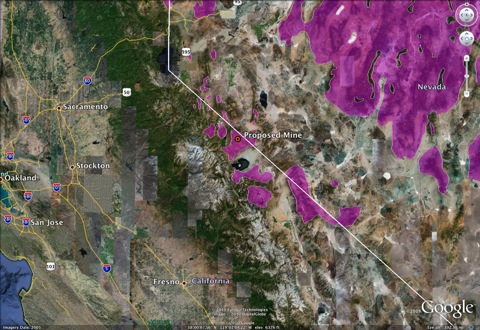 The Mono Basin sage grouse received a higher priority rating, a 3 on a scale of 1-12, as a candidate species than the larger populations elsewhere which received an 8 rating. Unbelievably the Chief of the Nevada Division of wildlife expressed greater concern about the industries that would be affected. That shows you what that agency’s priorities are.

“Ken Mayer, director of the Nevada Department of Wildlife, said the decision could affect mining, ranching and other activities in a wide area generally around the Mono Basin.”

Sage grouse in this area have declined greatly and have become greatly isolated not only from the larger populations but from each other. Frankly, these grouse should have been listed as threatened, if not endangered, due to their very low population levels and the threats that face them in the future. Notice that there is a proposed mine in the middle of one of the largest population areas.