But they continue to ignore the biggest threat to their habitat……….. GRAZING.
$16 million in handouts for this year alone.

The NRCS is handing out more money to ranchers for “habitat conservation” or “habitat improvement” projects that maintain grazing on public lands.

There are some projects such as fence removal that will be funded but the proposed seeding projects may require new fencing to keep livestock out for measly the 2 years they recommend and in some circumstances they call for applying herbicides to restrict the growth of sagebrush so that the seedlings can get a foothold.

So many times we’ve seen that these kinds of projects are co-opted by the livestock industry to be of more benefit to them rather than the values the funding was made available for. I doubt this will be any exception since they have made a concerted effort to deny that livestock have any role in sage-grouse habitat destruction.

A website is set up which lists the projects that the NRCS will fund.

One of the biggest threats to sage grouse in the West is livestock grazing and the developments associated with it. Things like fences, which pose a deadly threat to sage grouse that fly into them and provide perches for predators of them and their nests. Grazing also has impacts on one of the obvious necessities for survival of sage grouse and that is ground nesting cover. COWS EAT GRASS! Sage grouse need grass too for hiding their nests and young.

A recent study makes it plain that managers need to be concerned about how livestock grazing increases the number of ravens by subsidizing them with the carcasses of the livestock and reducing ground nesting cover. The authors point out that current recommendations for nesting cover are too relaxed and that sage grouse benefit from “20 – 30% sagebrush cover and ≥40% total shrub cover”. 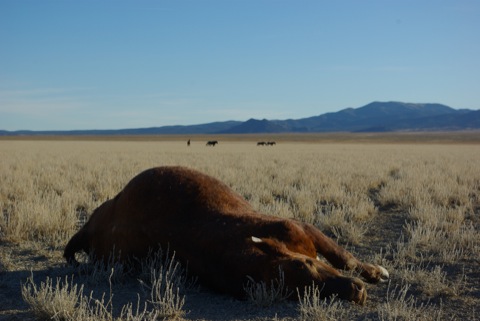 Cattle also flush nesting and brood rearing sage grouse which keys ravens and other predators in to the location of nests and chicks. In one study of nesting predators the cattle even ate the eggs of sage grouse or caused the grouse to abandon their nests. Cattle and sheep also come with guard dogs which prey on nests as well.

In the case of sheep often times herders are not informed of the locations of the leks on their allotments and there have been numerous occasions where bands of sheep have been camped out in the middle of the leks during the spring mating season.

Due to political pressure by the livestock industry, the agencies, rather than focus on these impacts, come up with huge “habitat improvement” projects which eliminate sagebrush and piñon/juniper trees which are, in actuality, projects to increase livestock forage. Currently there are a number of projects where the BLM and Forest Service are proposing to cut down “encroaching” piñon/juniper trees in areas where they were previously logged to provide fuel for mine smelters. Rather than “encroaching” they should be considered “recolonizing”. They are also conducting and proposing projects to kill vast swaths of sagebrush, which is the most important component of sage-grouse habitat.

If the agencies were sincere about improving or protecting sage grouse habitat they would be doing things to restore and maintain shrub canopy cover which means closing grazing allotments. They aren’t, and they are trying to put lipstick on a pig in an effort to make people think that they are. They are also allowing energy development, like pipelines, wind turbines, gas and oil wells, and their supporting roads and transmission lines, in areas that are important to sage grouse.

What are they getting for mitigation for these damaging projects? More fences and water developments which subsidizes livestock operations in these areas. Mitigation should make things better for the environment not make it worse, and it should be mitigation that is more than a bandage.

Sage grouse benefit more from leaving the habitat undisturbed but this money will likely be used to do just the opposite in an attempt to keep livestock on the land.