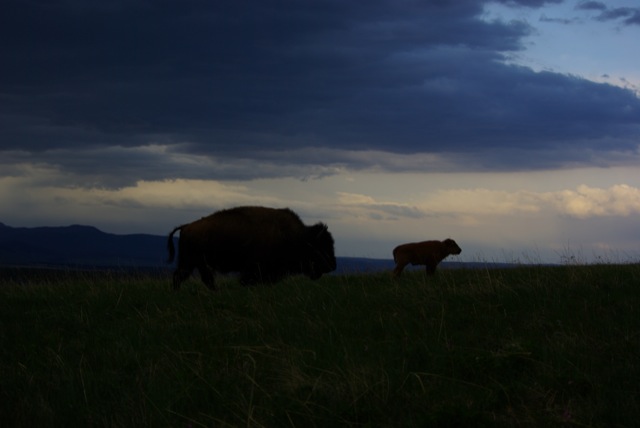 It has long been postulated that Yellowstone bison are important because they remain the only continuously free roaming herd but their importance has been elevated with the disclosure of a recent report which says that they are also the only genetically pure herd among those managed by the Department of Interior.

Not only this, but the Yellowstone population actually consists of two distinct populations which has extraordinary management implications.  Currently the management plan for Yellowstone bison does not take in to account the two distinct populations leading to the possibility that management actions could have a disproportionate impact on one population over that of the other.  These kinds of impacts can be profound genetically and can lead to loss of genetic diversity over time.  The management activities can also have disproportionate impacts on herds because they can eliminate entire maternal groups, groups of closely related cow/calf groups, which are routinely captured and slaughtered on the northern and western boundaries of Yellowstone Park.

Here is part of Table 1, found on page 8 of the report, which shows the population size and whether there has been any genetic introgression with cattle found:

a Based on mitochondrial DNA typing following Ward et al. 1999 and a panel of 14 nuclear microsatellites following Halbert et al. 2005.
b Introgression was not directly detected in these herds using microsatellite markers, but it is highly suggested due to the source of the herd and/or initial testing using single nucleotide polymorphisms (Robert Schnabel, pers .comm.).
* The entire Sullys Hill herd was moved to Fort Niobrara NWR in 2006. They are maintained separately from the original Fort Niobrara herd.
** Based on genetic evaluation, in 2006, all bison at Neal Smith were donated to a local Native American tribe, and a new herd was established with 39 bison from the National Bison Range.
*** Established with bison from the National Bison Range in 2006–2007.
**** Yellowstone bison of are two distinct but closely related types (Halbert and Derr 2007b, Gardipee 2007).