Note: A number of updates have been added to this story as other news media picked this up.  Lots of egg on the BLMs face!  RM
For these scroll to the bottom.

– – – –
Nov. 30, 2011. This morning Public Employees for Environmental Responsibility (PEER) filed a scientific misconduct complaint with the Department of Interior alleging that the BLM intentionally removed study of grazing disturbance from a $40 million series of studies of environmental impacts called Rapid Ecoregional Assessments.

When informed that grazing would not be considered one of the scientists hired to conduct the studies said “We will be laughed out of the room if we don’t use grazing. If you have the other range of disturbances, you have to include grazing.”

I’m trying to laugh them out of the room but this isn’t very funny since livestock grazing is the most widespread and damaging use of public lands, particularly BLM lands.

For those who doubt the political influence of the public lands ranching industry and the malfeasance of the agencies created to manage our public lands, here is a glaring example of both. This does not come as a surprise to me since I have been working on this issue for several years but maybe the magnitude of this controversy will rise to a level where the public finally takes notice. Intentional ignorance on behalf of the BLM to the glaringly obvious damaging impacts of grazing has been widespread for decades. 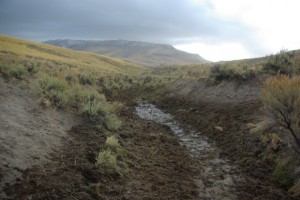 Below is the press release from PEER

Washington, DC — The U.S. Bureau of Land Management is carrying out an ambitious plan to map ecological trends throughout the Western U.S. but has directed scientists to exclude livestock grazing as a possible factor in changing landscapes, according to a scientific integrity complaint filed today by Public Employees for Environmental Responsibility (PEER). The complaint describes how one of the biggest scientific studies ever undertaken by BLM was fatally skewed from its inception by political pressure.

Funded with up to $40 million of stimulus funds, BLM is conducting Rapid Ecoregional Assessments in each of the six main regions (such as the Colorado Plateau and the Northern Great Plains) covering the vast sagebrush West. A key task was choosing the “change agents” (such as fire or invasive species) which would be studied. Yet when the scientific teams were assembled at an August 2010 workshop, BLM managers informed them that grazing would not be studied due to anxiety from “stakeholders,” fear of litigation and, most perplexing of all, lack of available data on grazing impacts.

Exclusion of grazing was met with protests from the scientists. Livestock grazing is permitted on two-thirds of all BLM lands, with 21,000 grazing allotments covering 157 million acres across the West. As one participating scientist said, as quoted in workshop minutes:

“We will be laughed out of the room if we don’t use grazing. If you have the other range of disturbances, you have to include grazing.”

In the face of this reaction, BLM initially deferred a decision but ultimately opted to –

Remove livestock grazing from all Ecoregional assessments, citing insufficient data. As a result, the assessments do not consider massive grazing impacts even though trivial disturbance factors such as rock hounding are included; and
Limit consideration of grazing-related information only when combined in an undifferentiated lump with other native and introduced ungulates (such as deer, elk, wild horses and feral donkeys).

“This is one of the screwiest things I have ever heard of. BLM is taking the peculiar position that it can no longer distinguish the landscape imprint of antelope from that of herds of cattle,” remarked PEER Executive Director Jeff Ruch, noting BLM has far more data on grazing than it does on other change agents, such as climate change or urban sprawl, that it chose to follow. “Grazing is one of the few ‘change agents’ within the agency’s mandate to manage, suggesting that BLM only wants analysis on what it cannot control.”

Earlier this year, the Interior Department, parent agency for BLM, adopted its first scientific integrity policies prohibiting political interference with, or manipulation of, scientific work. The PEER complaint charges that BLM officials improperly compromised the utility and validity of the Ecoregional assessments for reasons that lacked any technical merit and urges that responsible officials be disciplined.

“This is like the Weather Service saying it will no longer track storms because it lacks perfect information,” added Ruch, pointing out that an extensive formalized Land Health Assessment database, including range-wide assessments of livestock grazing across the sagebrush biome, has existed since at least 2008. “If grazing can be locked so blithely into a scientific broom closet, it speaks volumes about science-based decisionmaking in the Obama administration.”

12/2. Update by Ralph Maughan. Since the above news came out, a number of other news media have done original stories.