With two weeks left of wolf hunting and trapping left in Idaho, with the exception of the Lolo and Selway zones, the number of Idaho wolves is down significantly from the 746 number published in the Annual Wolf Report.  At the present time the population is at about 574, if the estimate in the annual report is correct, and by the end of the month will likely be at about 550.

As you know, I have been keeping a spreadsheet which I update with the numbers taken in the hunt. I’ve also recently added the published numbers for other sources of documented mortality.  There are likely many more that have not been documented.  With these numbers I’ve been able to construct a graph which illustrates what wolf mortality in Idaho looks like.

In making this graph I also added a total population estimate by using the end of the year estimate of 746 as landmark so that I could backtrack and estimate the total number of wolves after pups were born in April of last year.  Presumably the total population after pups were born last year was higher than shown because there is a significant amount of undocumented mortality that I can’t estimate without knowing basic information.  Also, it is hard to say how accurate the year end estimate really is.  Is it high or low?  Nobody can say for sure.

The graph essentially shows, based totally on documented mortality and taking for granted that the year-end estimate is correct, that the population of wolves, including last year’s pups, went from about 1036 to 574 now.  In April more pups will be born and the effect of the hunt on that number is totally unknown, especially since some breeding females have undoubtably been killed since wolves bred in February. 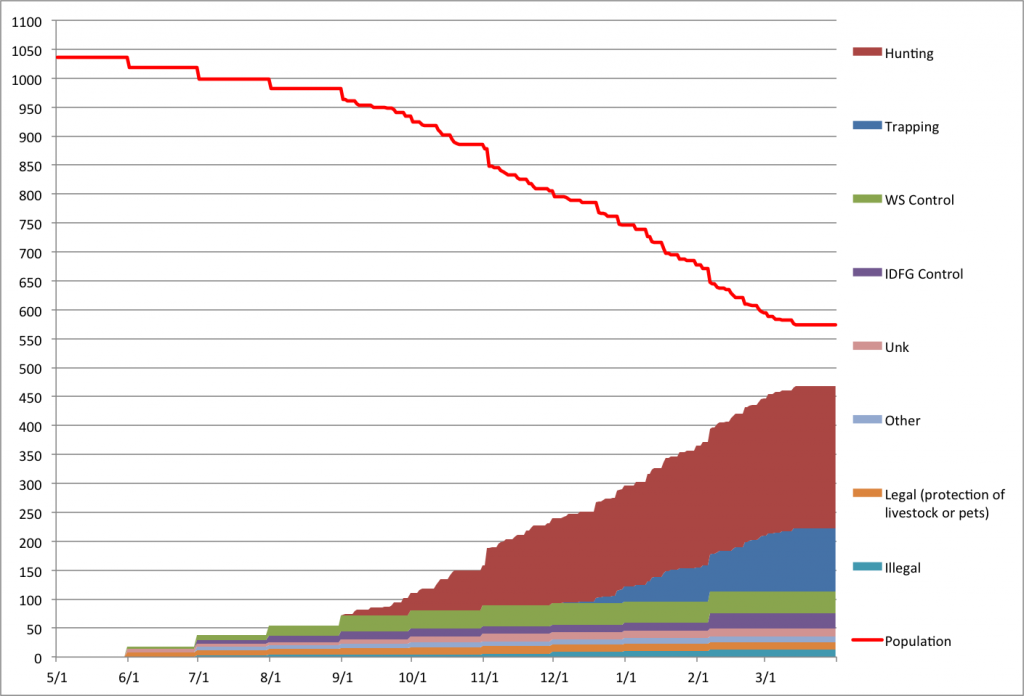 The next exercise I did was to figure out a very rough estimate of where the wolf population could possibly go if the rate of wolf killing remains essentially the same and another 50% of the population is killed in subsequent years.  This is total speculation but you have to consider that IDFG is proposing even greater wolf killing opportunity for next year.  To calculate an estimated number of pups that will be born next month I  multiplied the number of remaining wolves by a factor of 1.341 to get a total population of 770 or 196 pups.  I again did this for the following year and came up with 144 pups born to 420 wolves, making a total population of 564.  If mortality continues at the same rate, then, by the end of March of 2014, there would only be 303 wolves in Idaho. 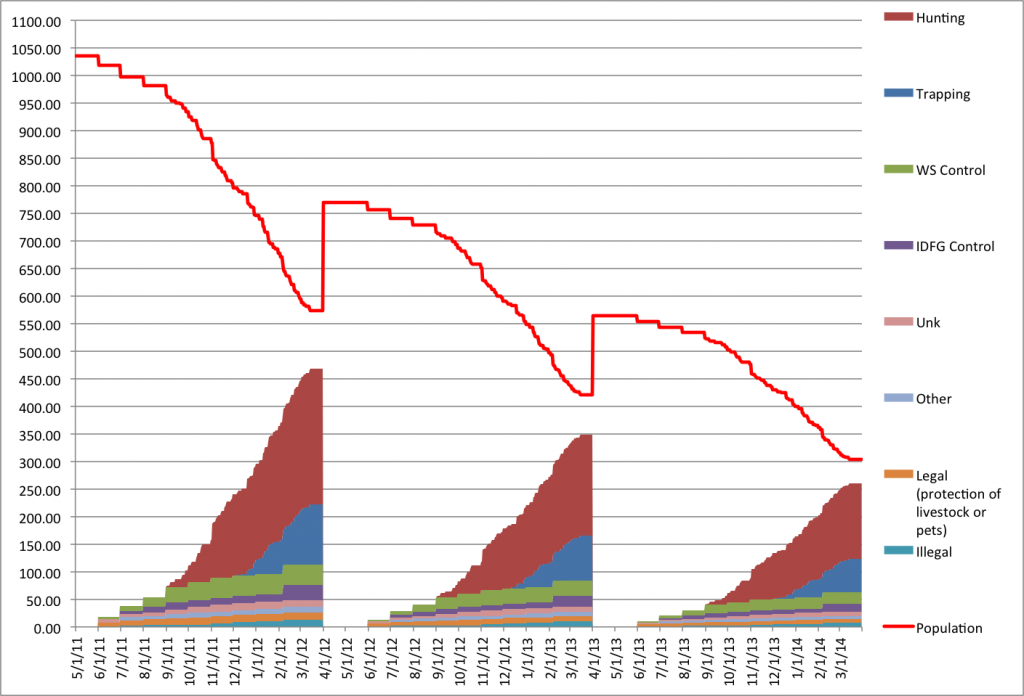 Nonetheless, the numbers are grim and I don’t think wolves have a very good future in Idaho.  I have to say that I am surprised at how many wolves have been killed in this year’s hunting and trapping season.  I underestimated how bad it would be.

45 Responses to The Grim Numbers of Idaho Wolf Killing