Cattle frozen in a USFS cabin at 11,000 feet in Colorado. What to do? Explosives? Untrustworthy: the history of Montana cattle ranchers and Yellowstone bison

“River of No Return” Premiers on PBS’ Nature Tonight

Isaac Babcock, and his new wife Bjornen, made a decision to spend the first year of their married life on an unusual honeymoon. They decided to spend the year living and filming a documentary in Idaho’s Frank Church River of No Return Wilderness which focuses mostly on wolves but also on the other amazing wildlife and landscapes found there. 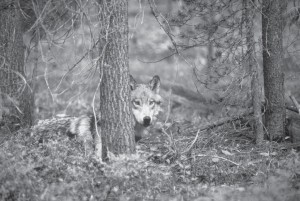 B88 of the Chamberlain Basin Pack, credit - Isaac Babcock 2002

They lugged around a hefty, but adequate, camera to film wolves, dippers, otters, bighorn sheep, elk, bluebirds, salmon and other wildlife and captured some amazing footage from very remote parts of the wilderness. They endured some real hardship to make this very good episode of Nature on PBS.

Isaac is a former member of the Nez Perce wolf recovery team and has been involved with Idaho wolves for a long time. I first crossed paths with him while we were both searching out the Buffalo Ridge Pack of wolves near Clayton, Idaho back in 2003. During the winters he had off, and since he left the Nez Perce Tribe wolf program, he has spent a lot of time filming in places like Idaho and Yellowstone. Some of his previous footage has been used in programs like Outdoor Idaho.

Some Idaho residents, like myself, may have seen this documentary when it was premiered during IPTV’s fund drive but April 18 will be the premier for the rest of the country.

Watch River of No Return on PBS. See more from Nature.

Watch a Preview of River of No Return | Nature | PBS.