A good week for bighorn sheep in Idaho. Simpson changes his tune. (UPDATED)

This week there have been two significant developments for bighorn sheep in Idaho that relate to the closing of domestic sheep grazing in occupied bighorn habitat. 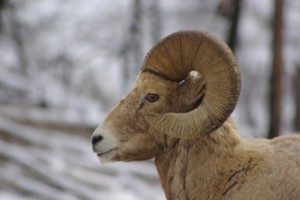 First, in an unusual ruling from the bench, Judge B. Lynn Winmill ruled that the closing of three domestic sheep allotments on the Payette National Forest should proceed as planned because they are not subject to the language of the rider that Mike Simpson added to the 2012 Consolidated Appropriations Act that passed last December.

In response to litigation by Western Watersheds Project and other groups, the Payette National Forest decided in 2010 to end domestic sheep grazing on 70% of the allotments open for sheep grazing. The reason for this was that domestic sheep carry deadly pneumonia that kills bighorn sheep. The bighorn sheep in Hell’s Canyon and the Salmon River Canyon have been suffering low recruitment of lambs from previous disease outbreaks for years and any new outbreak could end up eradicating these suffering populations.

Because the domestic sheep industry was afraid of this precedent setting decision, Mike Simpson added language to the 2012 Consolidated Appropriations Act to keep this from happening anywhere else in the West and to maintain the destructive practice of grazing domestic sheep in occupied bighorn habitat.

However, Harv Forsgren, the Region 4 Supervisor of the US Forest Service, overrode the recommendation of the Payette Forest and said that since the second of three phases to the Payette Decision, which closed three more allotments to sheep grazing, had not been implemented before July 1, 2011, they were unable to proceed.

This decision clearly contradicted the plain language of the rider which reads:

“none of the funds made available by this Act or made available by any other Act for fiscal year 2012 only may be used to carry out […] any new management restrictions on domestic sheep on parcels of National Forest System land […] with potential domestic sheep and bighorn sheep (whether native or nonnative) contact in excess of the management restrictions that existed on July 1, 2011“

This brings us to the key discussion during Wednesday’s hearing in Boise that revolved around the word “existed” which the attorney for the USFS attempted to conflate with the word “implemented”. He argued that since the closing of the three allotments hadn’t been “implemented” yet that the rider forbid them from continuing.

Since the Payette Decision had been finalized in 2010, and the permits had been modified and signed by the permittees by April, 2011, clearly the restrictions “existed” before the July 1, 2011 deadline contained in the rider.

When all was said and done, the judge quickly decide to rule from the bench in favor of the plaintiffs who asked that the allotments be closed to domestic sheep grazing.

This is a significant and long term victory for Idaho’s bighorn sheep.

Yesterday, in an article that appeared in the Capital Press, Nikki Watts, communications director for Mike Simpson, said “Judge Winmill’s decision did not follow congressional intent. Congressman Simpson’s provision was meant to freeze grazing as it currently existed, not as it was planned to be reduced by the forest.”

Clearly this contradicts what Simpson has said in the past.  In a letter to a constituent, and on his own website, Simpson explained that the language of this rider would not affect the Payette Decision and was only intended to prevent the grazing plan on the Payette from being implemented elsewhere for one year.

I have heard from a number of individuals who are concerned about this issue, and I believe it is important to clarify a few points.

Simpson was also interviewed for Idaho Public Television’s Dialogue program in October of 2011 at 1:56 he says:

The other big development from this week is that the BLM has decided not to renew its Memorandum of Understanding (MOU) with the Agricultural Research Service’s (ARS) United States Sheep Experiment Station (USSES) which allowed the USSES to graze domestic sheep on the Bernice allotment near Howe, Idaho at the southern end of the Lemhi Range.

New telemetry data from collared bighorn sheep made it clear that the risk of an interaction with domestic sheep was far greater than the USSES had portrayed in its Preliminary Environmental Impact Statement.

The USSES uses several different parcels of land in eastern Idaho and southwest Montana. Some of the land in the Centennial Mountains and near Dubois, Idaho is owned by the ARS and is not open to the public, while other parcels are used under agreements with the USFS, BLM and the DOE. Because the location of the USSES sits right along a major wildlife corridor, it impacts all kinds of species like grizzly bears, wolves, wolverines, lynx, bighorn sheep, grayling, Yellowstone cutthroat trout, and others.

The closing of the Bernice allotment is sure to put a kink in the Environmental Impact Statement process currently underway and will likely require the USSES to make significant changes to it or make an amendment to it.

While closing the Bernice allotment is just one step towards eliminating the threat of disease outbreaks caused by contact between domestic sheep and bighorn sheep, it is a major step for the bighorn sheep in the Lemhi Range and may help to secure their long term existence.

8 Responses to A good week for bighorn sheep in Idaho. Simpson changes his tune. (UPDATED)