Ken Salazar is reportedly leaving his post as Secretary of Interior in March of this year. His legacy includes a failed delisting of wolves in Idaho and Montana, which was legislatively pushed through, delisting of wolves in Wyoming where wolves are treated as vermin, approval of the Deepwater Horizon using a categorical exclusion from National Environmentally Policy Act analysis, development of many solar and wind plants in sensitive wildlife habitats, and development of other large tracts of wildlife habitats for oil and gas. 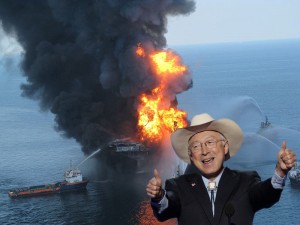 Appointed in 2009, with little public outcry by many of the mainstream conservation groups and chear-leading by others, Ken Salazar rushed to develop vast areas of pristine public lands and oceans for natural gas, oil, wind and solar energy which has been a disaster for wildlife and the environment. Remember the Gulf Oil Spill anyone?

His very first action as Secretary was to push through the flawed delisting of wolves in the Northern Rockies which was overturned in the courts, then reinstated legislatively to protect the senate seat of Montana Democrat Jon Tester. The move was widely panned by conservation groups and was clearly made to mollify the livestock industry.

With his ranching background he vigorously defended public lands ranching despite the damage to natural resources it causes throughout the West and virtually nothing has changed with regard to public lands livestock management from the Bush years. In fact, because the general public has a view that Democrats are better on environmental issues they have quit paying attention and things have gotten worse. In just about every way he has fought the protection of lands and wildlife whenever there was a conflict with commercial interests. 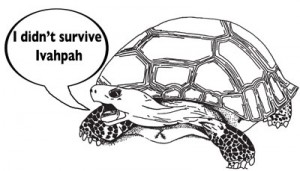 Salazar also sought to fast track large scale industrial energy development of public lands. In some cases, such as in the Ivanpah solar project, intact and ecologically important desert habitat was developed. The BLM and US Fish and Wildlife Service seriously underestimated the number endangered desert tortoises that would be displaced and ultimately killed but, after a short suspension of construction, the solar plant was allowed to move forward.

Another fast tracked project, the Spring Valley Wind Project in eastern Nevada, was built just a few miles from one of the largest bat caves in Nevada which houses up to 1 million Brazilian free-tailed bats during their fall migration. Bats are known to suffer high mortality from wind turbines caused by barotruama which causes their lungs to implode and blood vessels to rupture.

The beltway wisdom is that a westerner is the right pick for the position because most of the lands managed by the Department of Interior are in the West.

It is time for a new perspective with regard to federal lands managed by the Department of Interior. Maybe it isn’t the right choice to choose a western politician who has a brown record on environmental issues. Someone more progressive who understands the underhanded approach of industry and the corrupt nature of the land management agencies might be better to take the helm and reform them.

Those of us in the West who have watched the day-to-day workings of the BLM, USFWS, and NPS are hoping for a time when these agencies actually use the best available science and understand the peril that our lands and wildlife face. It’s time to break away from the beltway/conventional wisdom and appoint someone with knowledge of science and who does not have a history of exploiting our lands, water, and wildlife for profit or political gain, someone who has a real history of conservation.

The time is ripe for conservation groups to rock the boat and get behind someone who has a strong record of conservation.