Wolf Management Policy in the West — Is Compromise Possible?

Recent conversations with scientists at conferences, along with several comments made recently by readers of The Wildlife News got me thinking about this question. In one of the more bleak moments, a reader commented:

After years of reading and posting here, I finally got enough that I spoke out. I am a conservationist, I commit time, money and my heart to being a part of solutions. I may have finally lost all hope that there are any! It feels like reading here can do the same damage as beating my head with a sledge hammer! Nobody wants to listen, or learn—-just preach and demoralize others who differ in opinion from them.

I have certainly felt similarly of late. It seems that a variety of groups are more interested in using the wolf issue as tool to promote an agenda, than in finding a reasonable policy compromise that has a chance of appeasing the various interested parties. After a bit of reflection, it occurred to me that some of the data we’ve collected recently might assist in finding an answer. Specifically, I returned to a survey of readers of The Wildlife News that we conducted back in March of 2011, right before wolves were removed from federal ESA protections. In this survey we asked several questions about policy preferences, and we also asked people the extent to which they identified with a variety of interest groups (e.g., hunters, environmentalists, etc.). I went back to these data and correlated support for each management policy with interest group identification. The results (see Table 1., below) highlight policies that will promote conflict, but also provide some indication of where compromise will be found. I used color codes to help with the interpretation. In order to avoid help avoid bias, I designated color codes using Cohen’s (1988) interpretations of effect size: yellow indicates little to no correlation between group and the policy, green indicates positive correlation, red indicates negative correlation; the strength of the effect is indicated by the darkness of the color–darker colors indicating a stronger effect.

I’m providing these data to stimulate dialogue regarding reasonable compromises. I am not trying to promote any particular agenda or policy, so I will refrain from interpreting this table any further except to say that I’ve highlighted (in bright yellow) two other important numbers (i.e., variance and item mean).  Variance can be interpreted as the amount of variability across respondents on any given answer.  So lower variability means less disagreement.  Likewise, I’ve highlighted the the only policy that had a positive mean score (which could be interpreted as the most support). A word of caution: these data were collected via online solicitation of readers here at The Wildlife News; this should not be considered a representative sample of the general public.  I look forward to an interesting discussion! 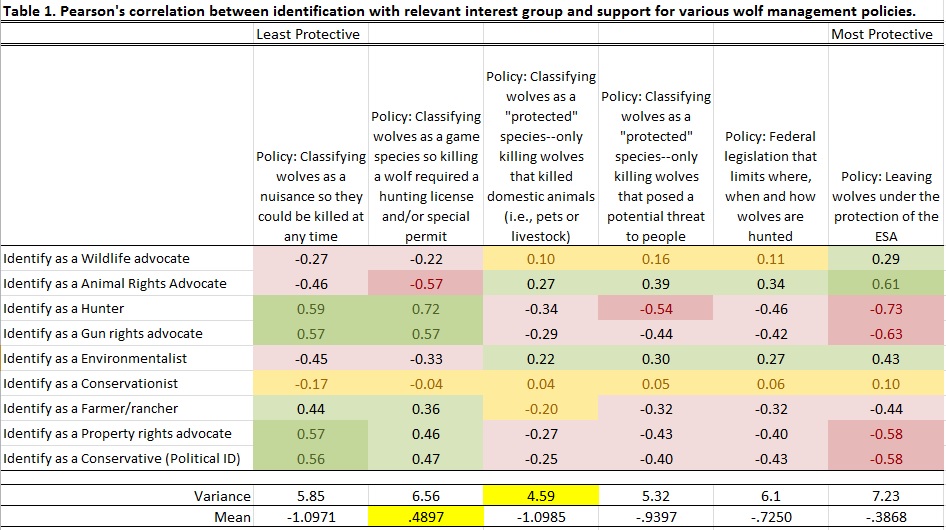 266 Responses to Wolf Management Policy in the West — Is Compromise Possible?