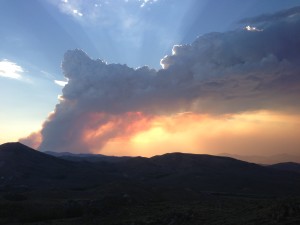 A lightning storm that passed through the foothills of southern Idaho ignited a series of fires that have burned 298,384 acres of forest and sagebrush steppe.  The McCan (23,860 acres), Beaver Creek (32,211 acres), Pony Complex (143,900 acres), and Elk Complex (98,413 acres) fires all started on Thursday, August 8 and quickly grew.  They burned structures, closed Highway 20 for a time, and filled the Treasure Valley, Wood River Valley, and Camas Prairie with smoke.  The towns of Prairie and Featherville have been evacuated and large portions of the Boise National Forest and Sawtooth National Forest have been closed to entry.

More than anything, the size of these fires has been dictated by dry conditions and winds.  In the western portion of the Pony Complex there is a fair amount of cheatgrass that is fueling some of the spread of the fires.  There is an area just north of Mountain Home, Idaho along Highway 20, where cheatgrass dominates the landscape and a few homes barely dodged the fire.  These homes have had numerous close calls in recent years and a large propane tank sits along the highway nearby. 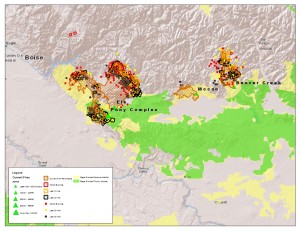 FEMA has agreed to help with costs of these fires due to their size and proximity to small towns.