Utah makes deal to open national parks in the state Great photos of grizzly, wolves, and others on bison carcass in YNP

Livestock Grazing is Permanently Ended on over 130,000 acres of Public Lands in Southwest Idaho

On September 1, 2013, The Sagebrush Habitat Conservation Fund completed the permanent retirement from livestock grazing of over 130,000 acres of public land in the former 45 and Tent Creek grazing allotments in Owyhee County, Idaho.

This permanently closes over 200 square miles of public lands to livestock grazing, ensuring habitat improvements for sage-grouse, California bighorn sheep, redband trout, and antelope. The allotments also encompass a vast sweep of relatively healthy sage-steppe landscapes including spectacular rhyolite canyon scenery of a number of tributaries of the Owyhee River and large areas of designated Wilderness adjacent to the Wild and Scenic South Fork of the Owyhee River.

The permanent retirement of these two allotments from livestock grazing is the result of an agreement between the Sagebrush Habitat Conservation Fund and the two permittees who formerly held the BLM grazing permits.

Sagebrush Habitat Conservation Fund is itself the result of Western Watersheds Project’s agreement with the El Paso Corporation (now Kinder-Morgan), a large natural gas transmissioin company, to form the Fund in June 2010.  In exchange for Western Watersheds Project not filing legal challenges to the 670-mile Ruby pipeline, El Paso Corp. agreed to provide $15 million over ten years to the Sagebrush Habitat Conservation Fund to be used for voluntary and permanent Retirements of public land grazing permits.

Since grazing permit relinquishment does not necessarily lead to permanent retirement of livestock grazing, The Sagebrush Habitat Conservation Fund seeks to carry out its work in locations where the legal framework authorizes permanent retirement of livestock grazing. In the case of the 45 and Tent Creek allotments, it is authorized by a provision in the Owyhee Wilderness Act of 2009 sponsored and passed through Congress by Idaho Senator Mike Crapo as part of the Omnibus Spending Act of February 2009.

The 2009 Owyhee Wilderness Act authorizes the permanent retirement of voluntarily relinquished grazing permits located wholly or partially within designated Wilderness. Both the 45 and Tent Creek allotments meet that requirement and have been retired forever by the BLM.

This major conservation accomplishment by Western Watersheds Project and the Sagebrush Habitat Conservation Fund with the welcome agreement of the 45 and Star Valley Ranch owners is the start of many more landscape-scale retirements from livestock grazing across the sagebrush sea. 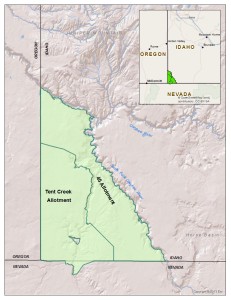 10 Responses to Livestock Grazing is Permanently Ended on over 130,000 acres of Public Lands in Southwest Idaho