POCATELLO, Idaho – A coalition of conservationists, represented by the non-profit environmental law firm Earthjustice, today asked a federal judge in Idaho to halt an unprecedented program by the U.S. Forest Service and Idaho Department of Fish and Game (IDFG) to exterminate two wolf packs deep within the largest forested wilderness area in the lower-48 states.

In mid-December 2013, IDFG hired a hunter-trapper to pack into central Idaho’s 2.4-million-acre Frank Church-River of No Return Wilderness to eradicate two wolf packs, the Golden and Monumental packs, in the interest of inflating elk populations for outfitters and recreational hunters. The U.S. Forest Service, which administers the wilderness, approved the extermination program by authorizing use of a Forest Service cabin and airstrip to support wolf extermination activities.

“A wilderness is supposed to be a wild place governed by natural conditions, not an elk farm,” said Earthjustice attorney Timothy Preso. “Wolves are a key part of that wild nature and we are asking a judge to protect the wilderness by stopping the extermination of two wolf packs.”

Earthjustice is representing long-time Idaho conservationist and wilderness advocate Ralph Maughan along with three conservation groups—Defenders of Wildlife, Western Watersheds Project, and Wilderness Watch—in a lawsuit challenging the wolf extermination program. The conservationists argue that the U.S. Forest Service’s approval and facilitation of the program violated the agency’s duty to protect the wilderness character of the Frank Church Wilderness. They have requested a court injunction to prohibit further implementation of the wolf extermination program until their case can be resolved. 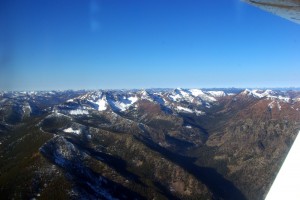 “Idaho’s program to eliminate two wolf packs from the Frank Church Wilderness Area for perceived benefits to elk hunting is just the most recent example of the state bending over backwards to accommodate the wishes of people who hate wolves,” said Jonathan Proctor of Defenders of Wildlife. “Wilderness areas are places for wildlife to remain as wild as is possible in today’s modern world. If Idaho’s wildlife officials won’t let wolves and elk interact naturally in the Frank Church Wilderness, then clearly they will allow it nowhere. The U.S. Forest Service must immediately prohibit the use of national forest wilderness areas for this hostile and shortsighted wolf eradication program.”

The region of the Frank Church Wilderness where IDFG’s hunter-trapper is killing wolves is a remote area around Big Creek and the Middle Fork of the Salmon River. Even though this region hosts one of the lightest densities of hunters in the state, IDFG prioritized elk production over protection of the area’s wilderness character. The Forest Service failed to object to IDFG’s plans and instead actively assisted them.

“As someone who has enjoyed watching members of the Golden Pack and spent time in the area where these wolves live, I am startled that IDFG thinks it is acceptable to kill them off. If wolves can’t live inside one of America’s biggest wilderness areas without a government extermination program then where can they live?” asked Ken Cole of Western Watersheds Project. “The value of wilderness is not solely to provide outfitters elk to shoot,” Cole added.

Read the Motion for a Temporary Restraining Order (TRO)

Read the Memo in Support of TRO and Preliminary Injunction 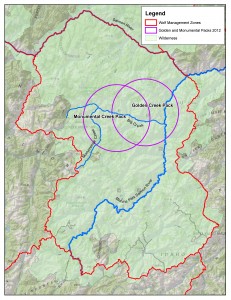