Lawsuit Launched to Protect Rare Lynx From Traps in Idaho 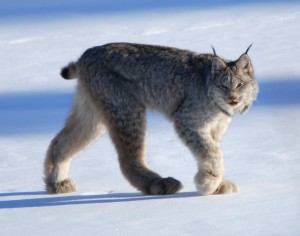 BOISE, Idaho— Three conservation groups initiated a lawsuit today against the Governor of Idaho and other state officials to halt trapping that illegally kills one of the rarest cats in the United States, the Canada lynx. The Center for Biological Diversity, Western Watersheds Project, and Friends of the Clearwater notified Gov. Butch Otter, the director of the Idaho Department of Fish and Game, and members of the state Fish and Game Commission of the Endangered Species Act violations in permitting trapping that leads to incidental killing of lynx.

The Canada lynx is a threatened species that numbers as few as 100 animals in the state of Idaho, where the rare animals are under unprecedented threat from recreational trapping. Although the intentional trapping of lynx is not permitted under Idaho law, with increases in trapping licenses and fur prices, especially for bobcat, at least three lynx have been unintentionally trapped by bobcat trappers in just the last two years. Under the Endangered Species Act, trapping of lynx, even if released alive, is illegal. Any agency permitting such trapping is liable under the Endangered Species Act.

“Trapping permitted by the state of Idaho is directly helping to push these rare, beautiful animals toward extinction,” said Louisa Wilcox, Northern Rockies representative of the Center for Biological Diversity. “This is a clear violation of the Endangered Species Act.”

The Endangered Species Act makes it illegal to kill, trap, harm or harass any endangered or threatened species. A government agency that permits such activity is also liable. The Idaho Department of Fish and Game can develop a conservation plan with measures to avoid and reduce incidental trapping of lynx and receive an incidental take permit. The plan, which would require approval by the U.S. Fish and Wildlife Service, includes restrictions on conibear, body-crushing traps and snares, reporting requirements, monitoring, and a daily trap check requirement throughout lynx habitat.

Last year the Fish and Wildlife Service proposed more than 26 million acres of critical habitat across six states for the Canadian lynx, which faces ongoing threats from habitat destruction and reduced snowpacks from climate change.

“The lynx is a true Idaho mountain icon, and a healthy Idaho population is critical not just to lynx survival here, but across the western United States,” said Ken Cole of Western Watersheds Project. “Idaho is the crossroads for lynx, allowing a healthy mixing between Rockies and Canadian populations. If we lose the lynx in Idaho, the whole western U.S. population is at risk.”

“If trapping was the only problem, lynx might be able to handle it,” said Gary Macfarlane of Friends of the Clearwater. “But with the low snowpacks and early melting that we are seeing from global warming, lynx are facing a deadly one-two punch. If we don’t act now, these marvelous creatures might not even inhabit the Idaho of our children and grandchildren’s generations.”

Lynx are medium-sized, long-legged cats, ranging up to 24 pounds. They are generally nocturnal and well-adapted to hunting snowshoe hare at high elevations.

The Center for Biological Diversity is a national, nonprofit conservation organization with more than 675,000 members and online activists dedicated to the protection of endangered species and wild places.

Western Watersheds Project is a non-profit conservation group founded in 1993 with 1400 members whose mission is to protect and restore western watersheds and wildlife through education, public policy initiatives and litigation.

Friends of the Clearwater is an Idaho-based nonprofit conservation organization that works to protect the wildness and biodiversity of the public wildlands, wildlife, and waters of Idaho’s Clearwater Basin.