UPDATE 10/17/2014: Due to a request by Representative Peter DeFazio of Oregon, the comment period has been extended until Midnight Mountain Time, THURSDAY, OCTOBER 23, 2014.

The BLM is asking for comments on an Environmental Assessment that examines the impacts of issuing a Special Recreation Permit (SRP) to conduct a predator killing contest on BLM lands. The comment period begins today and remains open for 21 days, until  THURSDAY, OCTOBER 23, 2014.

If the SRP is issued, the killing contest is scheduled to take place from January 2-4, 2015 and would include prizes for killing a variety of species from wolves, coyotes, weasels, skunks, jackrabbits, raccoons, and starlings. Last year the contestants killed 21 coyotes and at least one badger. The permit would allow the contest to take place on BLM lands in a large portion of eastern Idaho. 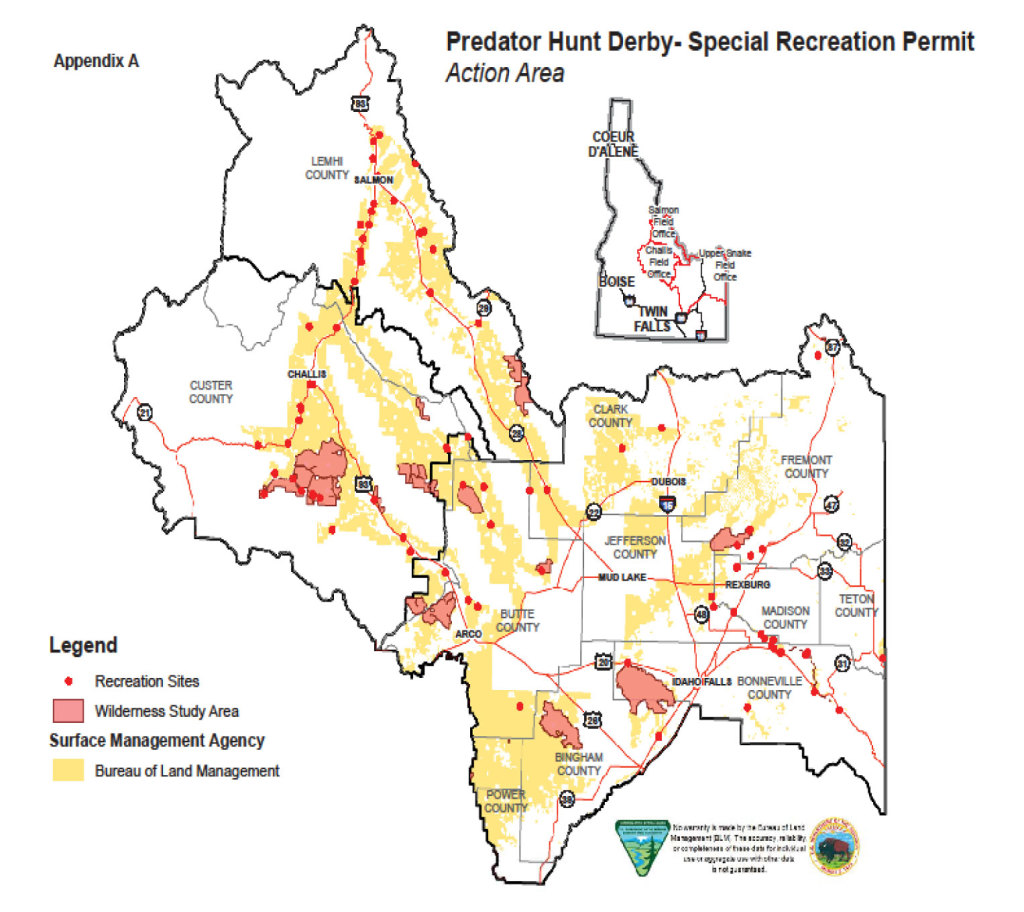 According to the Environmental Assessment, the BLM received “[a]pproximately 56,500 comments were received during the scoping period. Roughly 56,490 commentors indicated opposition to the event; most of these letters were copies of nine different form letters that expressed general disapproval of a hunting derby wherever it is held. Approximately 500 unique/personalized comments were received.” This means that there were only 10 comments in support of the permit being issued.

The Environmental Assessment was written in a manner that signals that the BLM is likely to issue the permit by giving much weight to the custom and culture of Salmon, Idaho and surrounding areas despite the fact that issuing the permit is likely to give the State of Idaho another black eye and affect tourism in the state. The economic analysis found that while the town of Salmon and surrounding areas might receive a $94,000 boost, the state as a whole could miss out on anywhere from $23,800 to $2,380,000 depending on how many people decide to not visit the state due to its draconian predator management policies. Admittedly, it is hard to quantify exactly how much the state will lose in economic activity but, because the world press has focused on Idaho’s wolf and predator management recently, it is clear that Idaho has a very poor image among those who value wildlife and would come to visit the state to see it.

The Environmental Assessment failed to adequately address an alternative SRP request for a wildlife viewing contest submitted by Western Watersheds Project and Center for Biological Diversity which, if the permit is issued, would take place instead of the derby or at the same time. The Environmental Assessment merely mentions the competing SRP and fails to consider or propose to deny the derby permit and approve the wildlife viewing context permit, or another alternative to allow both events during the same weekend.

To submit comments, the BLM has these suggestions:

When submitting comments, please focus on issues under BLM’s authority, i.e., impacts to recreation, wildlife habitat, social and economic values. The BLM does not manage for wildlife or determine hunting regulations. Please submit comments by mail to:

or by email at BLM_ID_Predatorhuntderby@blm.gov. The BLM will accept comments until October 16, 2014. For more information on the SRP application, contact the BLM Idaho Salmon Field Office at 208-756-5425.

Another Avenue to Express Concerns

Another avenue to express concerns is to contact the Idaho Department of Fish and Game Commission to ask that such predator killing contests not be allowed in Idaho. The Commission, as well as BLM, has authority to stop these contests in Idaho. Make it known that Idaho has a duty to manage all wildlife under the public trust doctrine and that allowing these types of killing contests only serves to further tarnish the image of the State of Idaho.

The Idaho Department of Fish and Game Commission adopted a Predator Management Policy in 2000 that states:

Fish and Game will not support any contests or similar activities involving the taking of predators which may portray hunting in an unethical fashion, devalue the predator, and which may be offensive to the general public.

Clearly, these contests are offensive to the general public, they devalue predators, and portray hunting in an unethical fashion.

The Idaho Department of Fish and Game has elaborated on this policy and acknowledged it does have the ability to restrict or require permits for these types of events.

Why is killing wildlife … state resources…(for prizes) okay for private individuals to make money? This seems wrong on all counts. | Idaho Fish and Game

Q: Why is it that private individuals can personally profit from killing resources in a carnival-like atmosphere? Resources that belong to everyone? Are you aware of how you are offending so many people?

A: Idaho Fish and Game has not been asked and will not provide any financial support or logistical support for this event.

13 years ago, the Idaho Fish and Game Commission adopted a Predator Management Policy that states “Fish and Game will not support any contests or similar activities involving the taking of predators which may portray hunting in an unethical fashion, devalue the predator, and which may be offensive to the general public.”

All participants are still required to obey the rules and current season frameworks such as season, method of take, licensing and reporting just like participants in a big buck contest. Fish and Game will conduct routine patrols to ensure current hunting rules and seasons are being followed. If there are reports of unlawful activity associated with this derby or any other hunting activity, Fish and Game will investigate.

Fish and Game serves as the public trust manager for Idaho’s wildlife. The agency takes direction from the trustees – the Fish and Game Commission, the Governor and the Legislature. If they decide to restrict or require permits for these types of activities, then Fish and Game will implement those policy decisions.

You can contact the Idaho Department of Fish and Game Commission visit this page where the contact information for the current Commission is posted: https://fishandgame.idaho.gov/public/about/commission/?getPage=183

You can contact the Salmon-Challis National Forest in Idaho and request that a SUP be required for this contest.