In a recent blog post, Defenders of Wildlife is grossly misleading the public claiming that they have “saved the last wild bison” by participating in and supporting the quarantine of buffalo that originated as wild calves from Yellowstone. Quarantine is a domestication process. There is no benefit from quarantine to bison as wildlife. Quarantine is no more than a fear-based control response to unfounded livestock industry complaints that are nothing but efforts to protect a subsidized lifestyle.

Despite public opposition, the initial Quarantine Feasibility Study conducted by USDA-APHIS and Montana Fish, Wildlife & Parks (MFWP) was initiated in 2005 and 2006. Beginning with the capture and slaughter of hundreds of wild bison under the highly controversial Interagency Bison Management Plan the study involved taking 100 buffalo calves from those destined for slaughter and transporting them to the Corwin Springs Quarantine Facility, located in the Gardiner Basin, one of North America’s largest wildlife migration corridors. Located just a few miles from where they were born free beings. 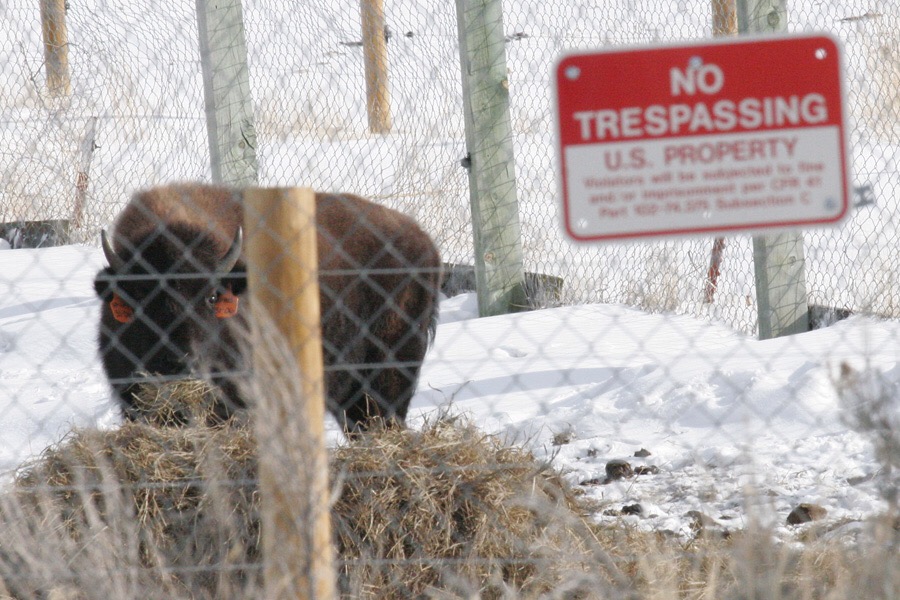 Wild bison have highly complex social structures, much like elephants, and humans have barely scratched the surface of beginning to understand their deep emotional bonds and cultural dynamics with each other and the land. The buffalo that started this scientific experiment lost their mothers, grandmothers, sisters, brothers, fathers and cousins — their nurturers, protectors and teachers — to genocide, and would begin a life of imprisonment and torture in the name of “conservation” under a livestock paradigm. These orphaned calves — the ones that would survive — were doomed to spend the rest of their lives behind bars.

Through the first year of the study, at least half of the calves were slaughtered and culture tested for brucellosis. The original calves that did not perish under quarantine study conditions matured physically and were forced into captive breeding. Nearly half of these buffalo, including their captive-born offspring, were slaughtered, while others died from injuries caused by human handling.

Quarantine, captive breeding, and artificial feeding causes a breakdown of family structure, unnatural breeding patterns, and a general loss of skills learned from natural settings and seasonal migration. In short, the buffalo that survived quarantine are much like domestic buffalo and therefore will not benefit species conservation. They are now like other captive herds, genetics bottled behind fences at the expense of wild integrity.

Five years into the quarantine program, Montana Fish Wildlife & Parks had made little effort to find a place for these buffalo once they “graduated” (their term) the study. Slaughter was threatened, even though there were numerous tracts of public lands in Montana where they could have gone, and numerous tribes had expressed great interest. MFWP rejected all of these options. Ted Turner agreed to house 87 of them in exchange for keeping 75% of their offspring, a hotly contested deal made by Montana which, because it violates the public trust, was litigated by Buffalo Field Campaign, Western Watersheds Project and a few other wild bison advocates.

In February 2012, the Montana Fish, Wildlife & Parks Commission voted to approve the relocation of sixty-eight quarantined buffalo (all that remained at the Corwin Springs quarantine facility) to the Fort Peck and Fort Belknap Indian Reservations in northeast Montana, with transport paid for by Defenders of Wildlife. Defenders sent out numerous emails touting the transfer of the catchy-titled “Yellowstone 68.” About a week before the transfer they again announced the coming transfer of what had inexplicably become “The Yellowstone 65.” What happened to the other three buffalo? The group didn’t say. On Monday morning, livestock trucks arrived in the Gardiner Basin along with Montana Department of Livestock riders to haze, corral and load a uncertain number of quarantined buffalo onto the trailers for transport to the Fort Peck Reservation. Fort Belknap received half of these buffalo after fencing projects were complete. After a 500-mile journey, 62 buffalo were unloaded into a one-acre “pasture”. Three died as a result of being transported but we still don’t know what happened to the other three. Buffalo Field Campaign reported extensively on these situations.

Now in 2014, approximately 146 of the buffalo held at Turner’s have been transported to the Fort Peck Indian Reservation. One bull never made it; he was killed for not being “cooperative.” These buffalo, joining the initial 60-something and their offspring, will be used to assist other tribes with the provision of buffalo, and the Fort Peck Tribe’s business herd. The buffalo will live on “range units,” various pastures with electric boundary fences, that total 10,778 acres. These buffalo will be culled annually and be ear tagged. While their genetics may be preserved, their wild integrity and migratory nature is eroded.

Per the contentious agreement between Montana and Turner, for his “hospitality,” Turner is keeping 200 buffalo that originated as public wildlife from Yellowstone National Park. They have become Turner’s private, domestic livestock in perpetuity. 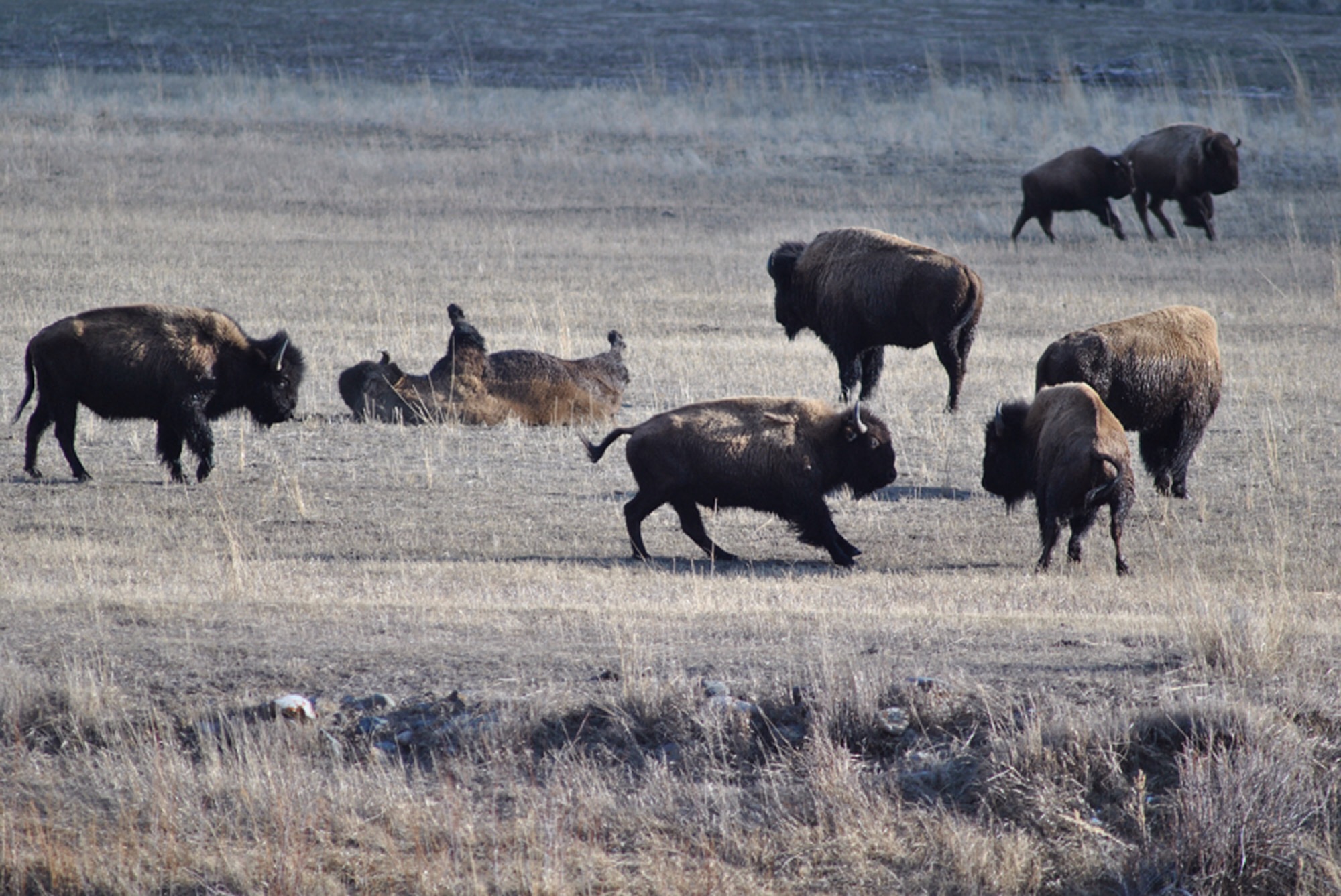 The quarantine process has produced more buffalo behind fences, and Defenders of Wildlife has made money and headlines off of the buffalos’ suffering, supporting efforts to domesticate them, something that has been done a million times over in this country. Quarantine is completely unnecessary and a serious threat to the wild integrity and character of migratory bison, and plays right into the hands of the livestock industry. Quarantine is not restoration, it is domestication. It validates the brucellosis farce, even though there is no evidence whatsoever that wild bison pose any threat to domestic cattle. And if so, remove the cattle. Quarantine does not stop the senseless slaughter that continues under the Interagency Bison Management Plan — it continues because groups like Defenders claim false and meaningless victories, subduing the public into thinking that everything is okay and we can all go home now. Quarantine is a slap in the face to First Nations Buffalo Cultures who have been told by the federal government that this is the only way they will ever have their relatives return again.

“Hau Mitakuepi, The buffalo have just as strong a connection to their land as we Indian People do. And just like us, the buffalo are being severed from their land by being put on ranches and domesticated. They are trying to turn buffalo into cattle just as they tried to turn Indians into Whites by putting us on reservations and sending us to boarding schools. Buffalo are not cattle anymore than Indians are Whites. They can’t live without their connection to their land. They must be allowed to roam free. Pidamaya. Mitakuye Owasin.” ~ Nick Anderson, Cultural Chairman and Historian, Mendota Mdewakanton Dakota Community.

Buffalo Field Campaign has always opposed the quarantine of wild bison as it is exclusively suited for domestic animals and is not consistent with accepted wildlife conservation practices. Quarantine just means more buffalo behind fences. BFC advocates for expanded habitat and migration corridors and if extensions of habitat are consistent with migratory patterns, it is highly possible for buffalo to naturally move to areas currently considered for the placement of quarantined buffalo. Quarantine is in the way of wild bison restoration.

Quarantine is designed as a control mechanism, something to placate livestock industry fears while providing lip service style “restoration” to the public and tribes. It has been proposed for Yellowstone buffalo in the context of a need to control population growth and to promote restoration of buffalo to other areas. However, population pressures are due to artificial constructs. The IBMP’s target population of the 3000 buffalo for Yellowstone National Park is not based on the ecological carrying capacity of the park, it is based on livestock politics. True restoration lies in habitat and migration corridors. Wild bison will restore themselves and need no “help” from humans.

Quarantine is an insulting government program force-fed to First Nations as the only way to reconnect with buffalo. It is damaging to wild bison and the Tribes that would see them home again. Is that all we can do is abuse wildlife, create livestock situations and call it wildlife restoration? We can certainly do better in our efforts at “wildlife restoration” than to abuse and treat members of America’s only continuously wild population of buffalo like livestock.

The bison quarantine debacle is another sorry example of how Montana has made no demonstrable commitment to manage buffalo as a wildlife species in the state, and they have clearly shown that they have no idea what it means to have a public trust responsibility to buffalo. All Americans, and Montanans in particular, should apply pressure on Montana Fish, Wildlife & Parks and Montana Governor Steve Bullock asking them when Montana will begin to live up to its responsibility to protect buffalo as a native, migratory wildlife species in the state.

We will continue to fight for the buffalo’s right to roam and to help heal the broken relationships that have resulted from so much human arrogance, ignorance, and greed. Buffalo Field Campaign continues to honor Native Americans and their sacred relationships with the buffalo, and we will be here until buffalo resume their rightful place on the landscape as the self-willed wild creatures that they are.

Stephany Seay is the media coordinator with Buffalo Field Campaign, a Montana-based wild bison advocacy group. She has spent eleven years in the field with America's last wild buffalo, the Yellowstone herds. Working with her partners at BFC, she helps monitor buffalo migration, studies their behavior, documents all actions made against them, and advocates for their lasting protection. Learn more about the work of Buffalo Field Campaign at http://www.buffalofieldcampaign.org. Contact Stephany at bfc-media@wildrockies.org