Adams County doesn’t have any so-called “herd districts” or areas where livestock are not allowed to simply roam free and Idaho’s open range laws don’t require livestock owners to keep their livestock off of highways.

As described in several news articles published on November 2nd, a Subaru carrying two people struck a black bull on Highway 95 north of Council, Idaho after dark on the evening of November 1st. As rescuers were trying to extract the passengers of the Subaru, the injured bull charged them and passing motorists. Dispatchers reportedly called Jack Yantis, who they though might be the owner of the bull and who is described by locals as a prominent rancher, to inform him about the incident. Just as the Adams County deputies were getting ready to shoot the bull, Yantis showed up with a rifle and there was an altercation that resulted in his death after the deputies shot him. The incident is still under investigation by the Idaho State Police but it has been reported that both deputies and Yantis fired their weapons and that one of the deputies was injured. The ISP did not disclose what caused the deputy’s injury. The victims in the Subaru were airlifted to a hospital and Yantis’s wife suffered a heart attack after learning of his death and was taken to a hospital where she is in critical condition. The bull was shot and killed at the scene.

“No person owning, or controlling the possession of, any domestic animal running on open range, shall have the duty to keep such animal off any highway on such range, and shall not be liable for damage to any vehicle or for injury to any person riding therein, caused by a collision between the vehicle and the animal. “Open range” means all uninclosed lands outside of cities, villages and herd districts, upon which cattle by custom, license, lease, or permit, are grazed or permitted to roam.”

These special laws, written solely to protect a special class of people (ranchers) are responsible for the incident in Adams County on November 1st. It is likely that this incident would not have occurred if it was the responsibility of the ranchers to keep livestock off of public highways. 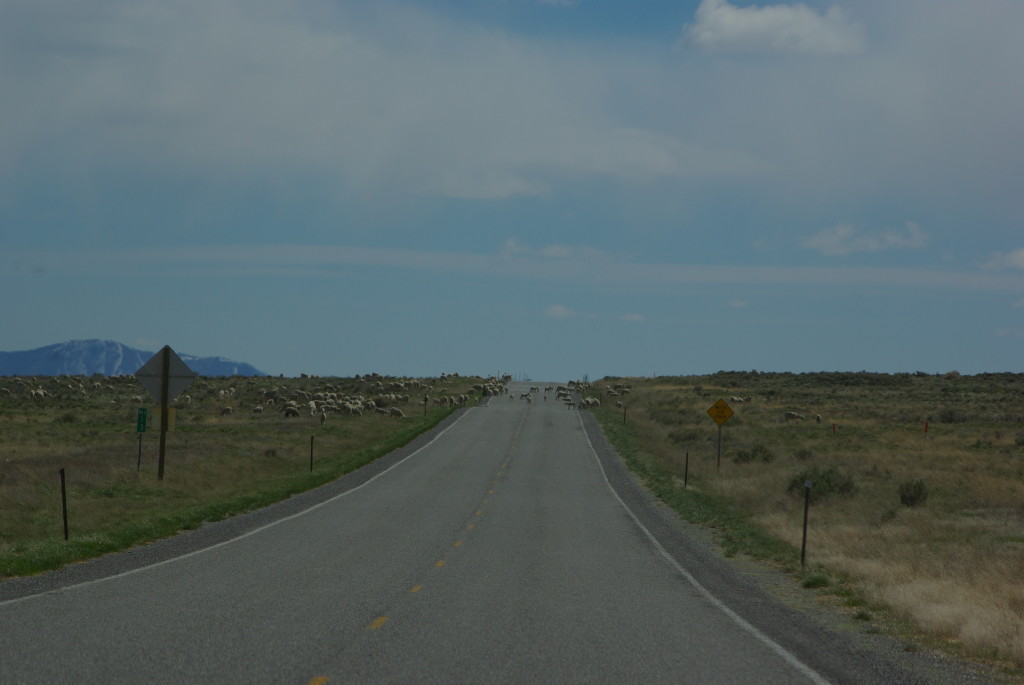 Livestock on the highway in open range. © Ken Cole

These laws are antiquated and seem deeply unfair and unsafe. They place the responsibility onto the victims of the accident rather than onto the owner of the livestock on public roadways. These laws also set up situations where ranchers can intentionally place people at risk with no consequence to the rancher. There is a story from the 1950’s of a rancher near New Meadows, Idaho who openly supported open range laws and routinely made people who hit his livestock on the roads pay for said livestock. Later, he famously hit a horse and was injured. I’ve seen water tubs, which attract cattle, placed near highways. Of the highways that I routinely travel, Highway 51, south of Bruneau is particularly notable for livestock on the highway, both on the Duck Valley Reservation and on BLM lands.

Idaho’s open range laws also let livestock owners violate private property rights and, when people complain, I’ve heard ranchers just tell them that it’s not their responsibility because they’re in a “fence out” state. In other words, their livestock can go anywhere, cause damage, and it’s your responsibility to build and maintain fences to keep them off of your property. Private property rights in Idaho apparently only apply to ranchers.

I receive occasional complaints from people around the state. One recent complaint involved the owner of several horses who could no longer afford to feed them on his private property so he just released them to feed on his surrounding neighbor’s property. Since it was open range, there was little recourse. The horses could go just about anywhere that wasn’t adequately fenced.

Most people don’t understand why these laws exist and find them deeply unfair. Many western states have these laws and there have been many people who have been injured or killed because livestock are allowed to graze freely on state highways in the west. Many times the victims are required to pay the ranchers for the livestock and for the damage to their vehicles.

There are several questions that need to be answered here. Did Yantis die because he felt emboldened by Idaho’s open range laws to confront the deputies who were about to kill his prized bull for the protection of themselves and bystanders? Do idaho’s open range laws inflate the sense of entitlement felt by an elite class of people and put lives at risk unfairly? Is it unfair to require landowners to fence livestock off of their property rather than require livestock owners to keep livestock fenced off of other’s property?

Here is some background from The Wildlife News back in 2013. “Open range laws, legal and illegal abuse by livestock interests.“

114 Responses to Incident Leaving Three Injured, Rancher Dead, and Wife in the Hospital After a Heart Attack, Highlights Need for Change in Idaho’s Open Range Laws.