The noisy political attack on new national monuments. We have heard the same now for 130 years Do you have some interesting wildlife news? Jan. 15, 2017 edition

No! California’s Forests are not Failing to Regrow after Big Wildfires

“Rather than alarming, a lack of conifer regeneration allows other vegetation its “moment in the sun” so to speak, and provides for a much more diverse forest ecosystem” . . . . George Wuerthner

Recently researchers at UC Davis and the US Forest Service presented a new scientific study that suggested a dire future for forests in California. The study on conifer establishment after wildfires in California found that 43 percent of their study plots did not have conifer regeneration that met Forest Service Stocking Standards, implying that without additional management we may face a future without forests. 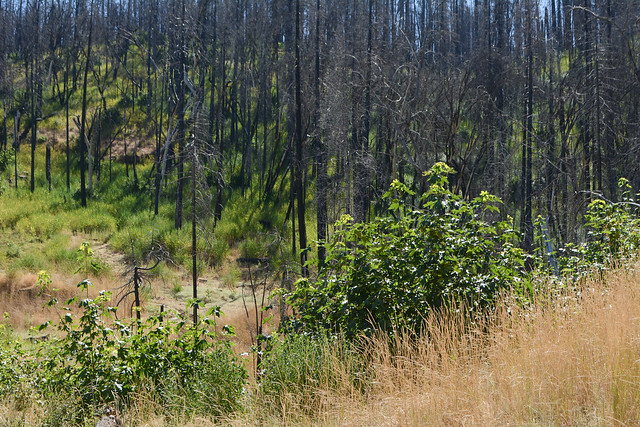 The findings were viewed with alarm by some, with some news reports suggesting that California’s forests were not regenerating after high severity wildfires.

To be fair, the study was not intended to review all the benefits of high-severity blazes, but what it lacked was context. First, even the authors admitted that the paradigm used to determine conifer regeneration is biased towards timber production. Besides, there are many nuances in interpretation that were only mentioned in the body of the study that few bothered to review. As a result, the report has generated undue concern and panic among the public that the state’s forests may be disappearing.

With regards to context, the authors, for one, choose to focus on the increase of wildfires in the past three decades, arguing that blazes during this period were more severe and extensive than wildfires in the past. They attributed this to fire suppression, past logging, and other forest management practices which they alleged have led to this significant increase in large wildfires. While these factors likely contributed to the observed greater tree density and fuel loads in forests to some degree, the report ignores the influence of past, wetter climatic conditions on limiting wildfire, and the ongoing drought that is likely contributing to greater fire occurrence.

Furthermore, the study made statements like “the frequency, size, and severity of wildfires across much of the western United States are increasing” without providing a time factor. Inreasing, compared to what? That’s important because there is ample paleo and even historic evidence of large high-severity blazes that have occurred in the past. For instance, during the Medieval Warm Spell between 800 to 1200 AD there is evidence for extremely large and continuous wildfires across the western US, including in California.

Even more recently there was significant climate variation that influenced wildfire behavior and spread. Between the 1940s and 1980s, for instance, the overall climate around the West was cooler and moister than in the decades past. These moist and cool conditions naturally reduced fire ignitions and fire spread. They also facilitated greater seedling survival and hence led to an increase in tree density.

So was fire suppression as important as commonly assumed or did climatic conditions contribute to the increase in tree densities and a reduction in fires?  Likely both are responsible, but almost universally fire suppression is given more credit than is reasonable.

This context is important because most current management, including so-called forest restoration, is justified on the belief that human inference with natural processes has created current forest conditions, and thus requires human intervention, usually in the form of logging.

And while California has experienced some large wildfires with extensive high-severity patches, one shouldn’t ignore the fact that the state has experienced one of the longest and most extreme droughts in the past 1,000 years. Given such historic drought conditions, one would expect there to be significant wildfires.

And when considering the climate change context, it would help to look at wildfires (as well as other natural processes like bark beetles) as helping to thin forests to help them adjust to new climatic parameters. The lack of conifer regeneration may be viewed as a good thing that is balancing the vegetation’s hydrological needs with available soil moisture.

The Forest Service, however, requires a certain amount of conifer regeneration within five years after logging. If there is insufficient natural regeneration, the Forest Service requires timber companies to plant conifers on the site, often creating even-aged, single species plantations that are biological deserts.

But is this silvicultural standard an appropriate way to measure the ecological effects of wildfire? I would argue it is not.

Having ample, rapid, and dense conifer regeneration is only important if your goal is logging for wood products. The focus on conifers skews the report because it gives the impression there was little vegetation on many of the plots. However, on most sites there was vegetation growing including regeneration of many native hardwoods like bigleaf maple, Pacific madrone, and black oak — all of which sprout from root crowns after a fire.

In addition, on many plots, shrubs like those from the ceanothus genus (California lilac, soap bush etc.) colonized burn sites, particularly high severity burn ones. These shrub species control erosion, and are important nitrogen fixers that help restore soil health. Other shrubs common on burn sites, like chokeberry and bitter cherry, are important food sources for wildlife.

In fact, in many instances, it is standard Forest Service practice in the Sierra Nevada and elsewhere to use herbicides on these nitrogen-fixing shrubs to hasten the establishment of conifers, therefore short-circuiting the natural ecological succession, and reducing the replacement of important nutrients in the soils.

In addition to shrubs, the report shows that there was a documented increase in “forbs” or flowering plants. These plants play an important role in forest ecosystems. Oaks, for instance, are an important source of mast (acorns) that many wildlife species from acorn woodpeckers to black bears feast upon. Many bird species utilize the shrub habitat for nesting and feed upon shrub, berries, and fruits. Shrubs are also consumed by deer and other browsing wildlife. And flowers are both consumed by wildlife and provide sources of pollen and honey for insects like bees and wasps.

But none of these ecological values were mentioned in the study.

Using the silvicultural standards for conifer regeneration that requires a certain number of confer seedlings established within five years also ignores the role that climate plays in conifer establishment. (Again, California has been experiencing one of the most severe droughts in history.)

Many conifers only have good seed production every five to ten years. Even in a good cone crop year, seeds require very a precise combination of moisture, temperature, and soil for successful germination and then another set of factors for seedling survival. The likelihood that all these factors would be met in five years is not high. So, expecting plots to have conifer regeneration after such a short period ignores the reality of climatic and tree biology factors required for regeneration.

Furthermore, the researchers own data showed there was less conifer regeneration on drier sites — exactly what one would expect during a severe drought that only exacerbates seedling failures.

Another important value of high-severity blazes that was not mentioned in the report is that they introduce snags and dead wood into forest ecosystems. The post-fire snag forest is some of the rarest and shortest lived habitat in our forest ecosystems. Studies have demonstrated that such snag forests — which include patches of native fire-following shrubs, downed logs, colorful wildflowers, and dense pockets of natural conifer and oak regeneration — are among one of the most biodiverse forest ecosystems. These short-lived forests exist only for a few years until the regeneration process is complete and new trees start taking over the space.

There were other methodological issues with the study. For instance, each study plot was only 1/70 of an acre. Given the natural heterogeneity of wildfires that result in mosaic patch of high, medium, low severity and unburned, small plots are unlikely to capture the diversity of regeneration that might characterize a larger plot. The study authors even acknowledged that much of the variation in conifer regeneration was due to non-fire attributes like slope, aspect (north slopes are moister) elevation, and other abiotic conditions that influenced conifer regeneration.

What all of this demonstrates is that much of the “problem” is an artifact of the unrealistic Forest Service silvicultural standards both for the number of conifer seedlings expected on a patch of land within five years and the bias towards timber production that ignores the many ecological benefits of high-severity fires. Many studies show it takes 30 to 60 years after a high-severity blaze for forest regeneration to occur under natural conditions. So what’s the rush?

Rather than alarming, lack of conifer regeneration allows other vegetation its “moment in the sun” so to speak, and provides for a much more diverse forest ecosystem. It also may be an important factor that is creating less dense forests that will be better adapted to future and predicted climate warming.

3 Responses to No! California’s Forests are not Failing to Regrow after Big Wildfires