Environmental and Wild Horse Advocates Agree: Livestock are the Problem on Western Ranges

When Erik Molvar of Western Watersheds Project (WWP) and Val Cecama-Hogsett of Citizens Against Equine Slaughter (CAES) met at a law conference in the spring of 2016, they had differing views of wild horses but they also had one clear common goal: to change the reality of the damage being done by livestock overgrazing the arid lands in the West.

Western Watersheds Project has long-advocated for the reduction and cessation of public lands livestock grazing to benefit ecological function and wildlife. WWP has no formal position on the origin of free-roaming horses, but supports science-based management of public lands and prioritize some threats more than others. Some of our members love wild horses and want to see them flourish, while others are opposed to them and consider them a pest. But all of our members agree that we want public lands to be restored to landscapes replete with native vegetation, native wildlife and healthy streams and rivers, as set forth in our mission.

In contrast, CAES firmly believes wild horses are a returned native species, because they never lost their very hierarchical harem family structure, retained inwardly-curling ears, and lack other signs of domestication. CAES’s position is that today’s wild horses evolved here in North America, and only here. Hence, although bred in captivity like many other wild animals, it never was fully domesticated and is an essential part of the western landscape.

So how can environmental groups like WWP and wild horse advocates like CAES work together to advocate for wildlife habitat on public lands? We look to remedy the biggest cause of landscape degradation in the West today: domestic livestock grazing, primarily by cattle and sheep.

These privately owned domestic livestock evolved in habitats far different from the American West, and are poorly adapted to the climate and vegetation found there. As a result, they are hard on the land – pounding fragile soils, eliminating native bunchgrasses, and spreading the invasive weed cheatgrass, the cause of unnatural range fires that wipe out the sagebrush that grouse and other native wildlife need to survive.

The Bureau of Land Management (BLM) issues about 17,600 permits for grazing on public lands in eleven western states, leased at the far-below-market-rate of $1.87 per cow and calf pair. This compares to grazing fees that average more than $20 per cow-calf pair on private pastures. These fees don’t even cover the cost of maintaining the grazing program, and the American taxpayer heavily subsidizes the cost-deficit that the program accrues, while the corporations grazing and selling their livestock rake in the profits. But the taxpayers lose more than money; they lose healthy habitats, healthy watersheds, and healthy wildlife.

In addition to the nearly free use of the land, the livestock industry gets many additional subsidies and services, and even a special taxpayer-funded agency misleadingly named “Wildlife Services” to kill predators of their livestock. Thus, not only do endangered wildlife like the sage grouse suffer from habitat degradation caused by livestock, but predators like wolves, bears, mountain lions and coyotes are slaughtered to make public lands safe for privately-owned cattle and sheep.

In contrast to the vast herds of livestock, wild horses are a bit of a rarity. Cattle outnumber wild horses by more than 37 to 1 on western lands, and horses are entirely absent in many parts of the West. Still, despite this small fraction, land management agencies and politicians often blame horses for land health problems to distract the public from the real problem: the chronic damage the ranching industry and its vast number of livestock are causing.

The American wild horse is, like it or not, a federally protected species, but their populations are disappearing despite the 1971 Wild Free Roaming Horses and Burros Act, put in place to protect them. In order to appease the livestock industry, the BLM’s current wild horse program relies on costly horse gathers using helicopters and motor vehicles, then pens horses in often-inhumane conditions awaiting adoption. The majority of the animals never get adopted, and instead are shipped off to distant private lands, which the federal government leases at taxpayer expense. Here’s the kicker: Leasing private lands can cost as much as $30 to $50 per horse; on the public lands from which they are removed, ranchers pay $1.87 per month for the livestock equivalent of one horse. Why displace livestock from distant pastures, often in wetter climates well-suited to cattle, and incur wasteful government spending on gathers, transportation, and pasture rentals for horses? It would be far cheaper to pay livestock ranchers to take cattle off western public lands instead, and to reduce grazing intensity to sustainable and ecologically healthy levels.

The new budget proposed by the Secretary of Interior will only make conditions worse. The wild horse program is slated for a $10 million budget cut, paired with new funding for slaughter of wild horses that aren’t adopted. In the same budget, environmental reviews of grazing leases is replaced by an even greater reliance on loopholes to allow grazing to be reauthorized under the same old terms, regardless of new science and new policy that is supposed to protect wildlife habitat. At the same time, there will be less money to fight cheatgrass, which is spread by livestock and is an ever-increasing ecological crisis.

Western Watersheds Project and Citizens Against Equine Slaughter have their differences, but are working together toward their common goal of decreasing the heavy footprint of livestock grazing on western public lands.

Erik Molvar is Executive Director of Western Watersheds Project (WWP), an environmental conservation organization, and Val Cecama-Hogsett is Board Member of Citizens Against Equine Slaughter (CAES), a domestic and wild horse advocacy group. 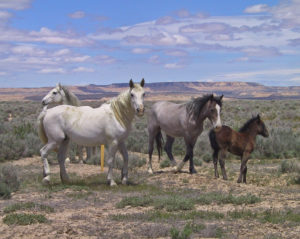 52 Responses to Environmental and Wild Horse Advocates Agree: Livestock are the Problem on Western Ranges