The recent Durango Herald article about the proposal for aggressive logging of Southwest Colorado Forests supported by the Rocky Mountain Restorative Initiative (RMRI) is a classic example of the Industrial Forestry worldview. https://durangoherald.com/articles/306885

The (RMRI) implies that trees killed by drought, beetles, or anything other than a chainsaw are somehow abnormal.  Not surprisingly, the membership of this group is dominated by timber interests and timber allies.

A healthy forest ecosystem is one with significant tree mortality. Many species live in mortal fear of “green” forests since up to 2/3 of all wildlife depends on dead trees for some portion of their life cycle.

The idea that logging will “restore” the forest ignores the multiple impacts of biomass removal, loss of carbon storage, loss of wildlife habitat, sedimentation in streams from logging roads, the spread of weeds, and all the other ecological impacts associated with any logging proposal. If this is “restoration” we could use a lot less of it.

Indeed, there is even evidence that logging increases the occurrence of high severity blazes. For example, a study that reviewed 1500 wildfires across the West found that the highest severity blazes were in “actively managed” forests, while protected landscapes like wilderness and parks had the smallest amount of high severity fires.

Recent studies do not support the RMRI assertion that low-severity fires are the “norm.” For instance, in the Colorado Front Range, 80% of the fires in higher elevation ponderosa pine are high severity.

Another study of the San Juan Mountains historical fire occurrence concluded that fire-resistant ponderosa pine forests with low density covered only the lower 15-24% of the local forests. Furthermore, the author found that even in these pine forests, mixed- to high-severity fires also occurred.

The majority of all fires remain small and often self-extinguish. In other words, we don’t need to worry about these fires because they don’t amount to a hill of beans.

A study by the Missoula Fire lab is representative of the scientific consensus “The majority of acreage burned by wildfire in the US occurs in very few wildfires under extreme conditions. Under these extreme conditions, suppression efforts are  largely ineffective.”

A review by the Congressional Research Service had similar conclusions. “From a quantitative perspective, the CRS study indicates a very weak relationship between acres logged and the extent and severity of forest fires. … the data indicate that fewer acres burned in areas where logging activity was limited.”

A letter to Congress signed by more than 240 scientists concluded, “Thinning is most often proposed to reduce fire risk and lower fire intensity…However, as the climate changes, most of our fires will occur during extreme fire-weather (high winds and temperatures, low humidity, low vegetation moisture). These fires, like the ones burning in the West this summer, will affect large landscapes, regardless of thinning, and, in some cases, burn hundreds or thousands of acres in just a few days.”

Plus the scientists concluded with this warning: “Thinning large trees, including overstory trees in a stand, can increase the rate of fire spread by opening up the forest to increased wind velocity, damage soils, introduce invasive species that increase flammable understory vegetation, and impact wildlife habitat.”

What these and many other studies suggest is that the RMRI proposal to “thin (a euphemism for logging) and burn 750,000 acres of the San Juan Forest is unlikely to achieve the results being promoted. The conclusion of many scientists is that active management may make blazes more likely and more severe. 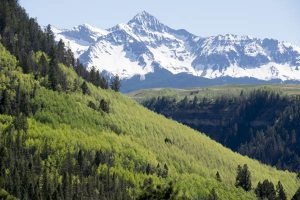