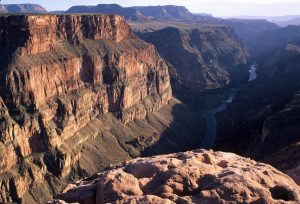 The Trump Administration is on the warpath against the environment.

From increasing oil and gas leasing on our public lands to decreasing national clean air standards for automobiles, eliminating environmental law enforcement, attacking the Endangered Species Act, removing the United States from the Global Climate Accord, and reducing oversight of livestock grazing on public lands, the Trump administration has demonstrated no commitment to environmental protection.

In 2016, the National Park Service objected to a massive development two miles from the entrance to Grand Canyon National Park, arguing correctly that it would compromise the integrity of the park’s lands. In response, the town of Tusayan where the development would be constructed hired Interior Secretary David Bernhardt’s former firm to lobby the Interior Department, which Bernhardt now oversees. Since then, the town has paid $520,000 in lobbying fees to advance the project. The proposal would result in shopping malls, hotels, and residences sprawling just outside the park’s south entrance.

Secretary Bernhardt has appointed lawyer Edward Keable as superintendent of Grand Canyon National Park. Ed Keable works in the Interior Department’s Office of the Solicitor. The appointment is seen by many as an attempt to reverse the Park Service’s objections to the gateway development.

Keable has no experience in the National Park Service. Most park superintendents work their way up to such a prestigious position, running one of the major National Parks in our country. His appointment by Bernhardt, himself a former lobbyist for the oil and gas industry, is an attempt to circumvent the Park Service’s previous objections to the development.

Is it coincidental that Bernhardt has appointed someone under his thumb to run the park? Bernhardt’s appointment of Keable signals that commercial interests will overrule park resource managers. Most National Park superintendents understand their job is to protect park ecosystem integrity, not to assist developers. Bernhardt clearly thinks that is the wrong approach.

It is another demonstration of the corruption found throughout the Trump Administration where the Secretary of Interior allows his former lobbying firm to influence department policies and actions.

Since President Trump himself continues to make decisions that benefit his own business operations, it’s not surprising that many of his political appointees see nothing wrong with bending public policy to serve private interests.

George Wuerthner chairs the Board of Directors at RESTORE: The North Woods. He has published numerous books on national parks, including Keeping the Wild: Park and Wilderness the Foundation for Conservation. He has personally visited more than 200 national park units.