By George Wuerthner On May 1, 2020 · Leave a Comment · In Elk, Forest Service, Invasive Species, Logging, Oregon 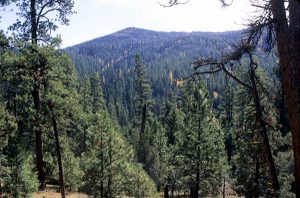 Forest on the Ochoco National Forest. Photo by George Wuerthner

As is typical of the Forest Service today, they use euphemisms to conceal what they always have been and continue to be—a handmaiden to the timber industry.  The Forest Service proposes, among other manipulation—to log or thin, which it calls “treat” some 4,500 acres of the 15,763-acres unit.

The word “treat” is no accident because the agency suggests that chainsaws can “cure” what it perceives to be an “unhealthy” forest.  Ironically, the only way the FS knows how to “restore” forest health is by logging the woods—what I call more accurately “chainsaw medicine.”

Whether it is forest health or a reduction in wildfires, even if we agreed these goals were desirable, logging/thinning is unlikely to promote these values. For instance, thinning can open the forest to greater drying and wind penetration-both factors known to exacerbate fire spread.

Note that the Forest Service justifies all logging today in the name of “forest health.” For instance, the agency states in its Final Environmental Impact Statement that the purpose of the project is to restore characteristic (i.e., historic) dry forest vegetative conditions… to increasing resilience to insects, disease, fire, and drought.

The Forest Service believes the historic condition was open park-like stands dominated by ponderosa pine and proposes “restoring” the structure and appearance, but at a cost to ecosystem function. The assumption is that most forests were open and park-like and frequent fires prevented “high severity” burns.

Of course, it ignores conflicting studies like that done by William Baker who studied dry forests across the West, including in the Ochoco Mountains. Baker concluded the largest fires, contributed 97% of total burned area in Arizona pine forests, and went on to say “This pattern, common in forests and also suggests that in dry forests most of the burned area is from infrequent large fires, with frequent small fires not adding much to total burned area.”

Obviously, if Baker is correct, the Forest Service goal of precluding large fires and opening up the forest to create “park-like stands” would not be “restoring” the historic conditions.

What the FS does not want you to know is that far more species depend on dead trees than live ones. So if you are going to promote forest ecosystem health, you welcome the insects, disease, fire, and drought and the natural mortality they create.  These agents are what create “healthy” forest ecosystems.

For example, some studies suggest as many as 2/3 of all wildlife species depend on dead trees at some point in their life cycle. And if you were to include insects, ants, fungi, lichens, and other life forms, the list of dead tree dependent species would likely number in the thousands.

Of course, trees, alive or dead, store carbon, provide hiding cover or security for wildlife like elk and are storehouses of nutrients.

The Forest Service proposes removal of grand fir and Douglas fir, including trees up to 20 inches in diameter to “restore” the forest. Yet grand fir rots quicker than other forest trees, providing habitat that is not available from other tree species.

All of these ecological and biological values are eliminated when the trees are removed by chain saw medicine.

In another example of how the Forest Service tries to hide its degradation of the forest ecosystem, it is proposing to create 24 miles of new roads and 22 miles of “temporary roads” and road maintenance on 135 miles of roads in the project area. In an effort to placate critics or just playing upon the ignorance of people when it comes to the ecological costs of roads, it uses the term “temporary” to imply that whatever damage is done by permanent roads, is only “temporary” if the road is designated as such.

Roads, temporary or not, are a significant factor in the degradation of the forest ecosystem.

In an excellent review of roads and their impacts in Conservation Biology, Chris Frissell and Steve Trumbulak assert: “Roads of all kinds have seven general effects: mortality from road construction, mortality from collision with vehicles, modification of animal behavior, alteration of the physical environment, alteration of the chemical environment, spread of exotics, and increased use of areas by humans.”

For example, as long ago as the 1970s, biologists found that elk avoid roads, even temporary roads. And many researchers have noted that most road closures are ineffective, and people still use them.

Advocates of chainsaw medicine write this off saying the elk and other sensitive wildlife can move someplace else. The problem is that there is no “someplace else.” If the habitat is suitable, there are already other animals using it.

Roads are a significant source of sedimentation in our streams. Road surfaces become compacted for decades and increase overland flow, leading to higher runoff and erosion. And temporary roads are even worse because they are usually built to lower standards and more likely to “blowout” in storms.

Roads are also a significant corridor for invasive plants, and logging disturbance enhances weedy plant spread. For instance, in a recent paper in Forest Ecology and Management, the authors noted that “forest management actions such as thinning, prescribed fire, and fuel reduction may exacerbate invasive grass populations and increase the potential for further invasion, as well as broader landscape-level changes through increased fire spread and frequency.”

Roads also increase fires by creating access for humans. It is well established that most wildfires today are human ignitions and occur near roads. Plus, the road corridor tends to warm and dry faster than the surrounding forest, creating ideal conditions for fire spread.

I’ve never seen a Forest Service road that was entirely “restored.” Often the idea of “restored” means putting up a gate.  Typically, the road lens and cut bank remain, which is yet another source of erosion and sedimentation, not to mention the access provided by the road remains in some form.

I don’t even want to get into the lack of accurate accounting of the cost of this fiasco. The FS claims they will lose several million dollars on the timber sale, but that loss is much higher if all the ecological costs were accounted for.

For instance, in an economic analysis of Oregon BLM proposed tree cutting economist Ernie Niemi calculated that the loss of carbon storage due to logging: “Outweigh the additional timber-related benefits by more than 30-to-1 and equaled $1.6 million per additional timber-related job.” While this analysis was done on west side carbon-rich old-growth forests, the same general principles apply to the Ochoco forests.

Beware of anyone who suggests they are “restoring” the forest with chainsaws. You won’t have to look far to see that the timber industry will benefit, while the forest ecosystem will suffer.