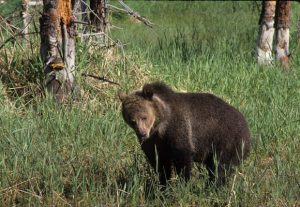 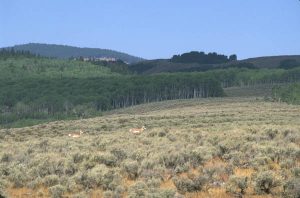 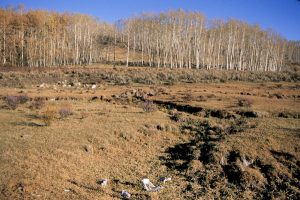 A recent article in Wyofile by Argus Thuermer was full of quotes from the ranchers grazing the Upper Green River allotment on the Bridger Teton National Forest in Wyoming.

The Upper Green River grazing Allotment at 170,000 acres, is one of the largest grazing allotment in the West. It lies near the base of the Wind River Range to the north of Pinedale, Wyoming. It is, in my view, some of the best unprotected wildlife habitat in the West. It should be given protection as a new national park.

Without a doubt it should no longer function as a feedlot for ranchers.

The ranchers in Thuermer’s article are upset that Western Watersheds Project, Alliance for the Wild Rockies and Yellowstone to Uintas Connection filed objections to the Forest Service’s decision to reissue grazing permits for the Upper Green River Allotment. The authorization would allow ranchers or the misnamed “Wildlife Services” to kill up to 72 grizzlies in the next ten years.

The ranchers claim the objection violates their “rights” and that removal of cattle would lead to a host of negative environmental impacts.

They argue that driving 9,000 cows and their calves (so about 18,000 animals) across public lands, including the sole habitat of the endangered Kendall Warm Spring Dace is part of a “cultural” property owned by the ranchers.

They also assert that somehow ranching on public lands and their operations are important to the Sublette County economy.

The ranchers go on to assert they may be forced out of business and would have no choice but to subdivide their lands.

Let us take a look at these claims.

One of the ranchers asserts if the plaintiffs are successful, that “will have a severe impact on my rights as a federal grazing permittee because my ability to graze the Upper Green River Cattle Allotment will be significantly restricted, if not eliminated. This will have a devastating impact on my livestock operation and will also impair the use of private property water rights, range improvements and related infrastructure…”

Apparently, the ranchers are unaware that grazing on public lands is a privilege, not a right. Grazing can be terminated at any time, though it seldom is due to the stranglehold that the livestock industry has federal agencies. Ranchers do not have private property rights to public lands. This has been decided numerous times in the courts.

The Upper Green is some of the best wildlife habitat in Wyoming, including for grizzlies. The area supports wolves, sage grouse, pronghorn, elk, moose, Colorado cutthroat trout, several amphibians, and other species rare or declining in numbers.

One of the issues is that in its operating plan, the Bridger Teton National Forest has designated the entire Upper Green as a wildlife priority area. In other words, if there is a conflict between any use and wildlife, the wildlife is supposed to be given the preference. Apparently, the Forest Service does not view killing 72 grizzlies in the next ten years as a conflict.

That many cattle compacts soils. They pollute water. They spread weeds. Fences install to facilitate livestock operations, blocks wildlife movements and can even be a source of mortality. For instance, one Wyoming study found 30% of sage grouse mortality was the result of collisions with fences.

Grass going into cattle is not available for native wildlife be it elk, grizzlies or butterflies and grasshoppers, which in turn impacts other wildlife that may feed or depend on them (pollination).

In addition, the mere presence of domestic animals socially displaces some wildlife like elk. If elk are grazing in an area in the first place, you must assume it’s the best habitat for them. So, if they are displaced, they are being pushed in secondary habitat that may have less nutritious forage or be more vulnerable to predators.

Third, the presence of domestic animals damages important wildlife habitat like riparian areas, the lush vegetation like willows found along streams that are critical to some 70-80% of western species, in particular, many birds.

The Forest Service allows such degradation of our property if you wear a cowboy hat and have a big belt buckle.

As for their economic contribution, if all the ranchers using the allotment (a small subset of all ranching operations in the country) it would barely be missed. Farm income in Sublette County from all sources accounts for only 1.2% of personal income. Keep in mind there are over 400 farms or ranches in the county and less than a dozen ranchers graze the Upper Green Allotment. Thus, the percentage of income resulting from grazing the Upper Green River Allotment would be a fraction of even the 1.2% of income derived from Ag in the county.

The ranchers also assert if they are driven out of business they will be “forced” to sell their ranches for subdivisions and they imply that is worse for wildlife. The old “condos vs cows” threat is always used by ranchers and their allies to frighten the public. https://www.counterpunch.org/2010/02/16/cows-condos-and-all-the-rest/

Beyond the fact that in many cases subdivisions with their landscaping provide more habitat for wildlife than a rancher’s hayfield, do not spread diseases to wildlife, do not normally kill predators, do not require dewatering rivers which destroys aquatic ecosystems, do not trample riparian area, do not pollute the water, do not occupy nearly as much territory as the 170,000 acres grazed and degraded by cattle in the Upper Green allotment, ranchers don’t have to sell to a subdivider. They can put their ranch under a conservation easement. Plus, in the Pinedale area, which is popular amenity area with wealthy individuals, selling intact ranches often brings greater economic returns than a subdivision.

In other words, there is more to the debate than the simplistic idea that a rancher denied access to public lands will automatically turn their ranch into ranchettes.

Since 1995 ranchers grazing the Upper Green have lost 1000 cows-not nearly enough in my view. I worry that the grizzlies are not getting enough to eat, but that is another issue. At the same time from 2010-2018 at least 37 grizzlies were killed on the Upper Green allotment while they are presumably “protected” by the Endangered Species Act.

The real issue is about public good. Should private businesses (ranching is a business) be permitted to destroy and ruin of public resources for private profit? Should the public tolerate the killing of endangered species to facilitate an archaic lifestyle?

There is a simple solution. Ranchers can take their cows and go home.  There is no “right” to damage public resources. Just because you have been doing something ruinous for a hundred years, doesn’t mean it should continue. We don’t condone slavery even though it existed for well over a hundred years. We should not condone the use of public lands for private gain at public expense anymore either.

The public and the wildlife that live in the Upper Green River basin deserve better.