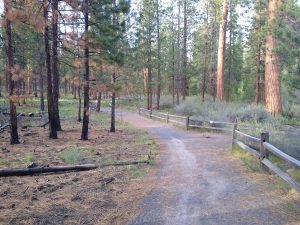 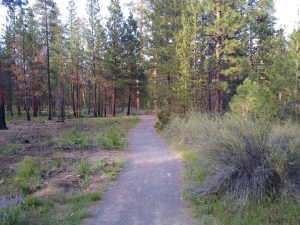 Note the lack of plant diversity on the left side of the path which was “treated” to “restore” the forest. Photos by George Wuerthner

These two images display a recent example of a forest “restoration” project designed to improve the “health” of a ponderosa pine forest. The area to the left of the path was recently (about a year ago) thinned and then burned. The area to the right of the trail shows what the “unhealthy” landscape was like before “restoration” occurred.

I would argue from a forest ecosystem health and biodiversity perspective, the managed landscape pictured here is degraded and less “healthy” than the right side of the pathway.

First, note that the forest left of the path is nearly uniform in species and tree size. You see little young age class trees. Other tree species that exist in the area and visible to the right side of the path like aspen, lodgepole pine, and in places, even grand fir are gone.

The “treated” side due to its more uniform species and age class is now much more vulnerable to future disease and insect outbreaks.

In addition to the loss of species diversity, there is almost no understory shrubs or other plant species on the left side (left) of the path. While the right side has a greater diversity of “habitat niches” that includes shrubs, flowers, grasses, and other plant species. All of this diversity supports a greater variety of insects, birds, small mammals, reptiles, and other wildlife.

There is a collective loss of dead wood, and even the potential for future snags and dead wood since the goal of these treatments is to preclude natural processes like bark beetles, wildfire and other natural disturbance processes from occurring.

The removal of trees by thinning has also reduced the carbon storage on the site, and as many papers extoll, this loss today is problematic and will take a long time to recover.[1]

Part of the problem is that the Forest Service and other public lands agencies have a distorted (in my view) of the actual condition of the forest. To them, the ideal state is a forest consisting of nearly pure ponderosa with little understory. No doubt, this existed in some places, but it was far less uniform as commonly asserted.

For instance, below is a historic photo taken in nearly the same area as the scene above, showing loggers cutting a large old-growth ponderosa pine. However, notice that in the background, there are many smaller and younger pines in the photo. I have found numerous other early photos demonstrating to one degree or another than the ponderosa pine forests were anything but open and park-like. 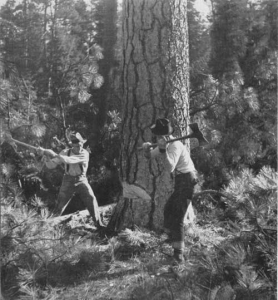 Several studies have come to similar conclusions. For instance, one study of the eastern Cascades where these photos were all taken found only 13.5% of dry forests were open and low density.  Shade tolerant firs were 17% dominated stands in 12% of the area, and low severity fire, which the land management agencies seek to extend over the entire landscape only occurred on 23.5% of the area with 26.5% of the forest burning in high severity blazes. Historical fire included modest-rotation(29–78years) low-severity fires with long-rotation and ( 435years) high-severity fire. [2]

Another study of dry interior forests in British Columbia also came to similar conclusions. “A complex, mixed-severity disturbance regime creates uncertainty about what represents “natural” forest conditions, or what the target conditions for restoration activities are if the objective is to “restore natural conditions.” We conclude that dry forest ecosystems in British Columbia typically experienced mixed severity disturbance regimes that included fire, bark beetles, and defoliators. Trying to “restore” these forests with applications of frequent, low-severity fire is not an ecologically sound objective over large areas.”[3]

A third study warns that the idea that low severity fires dominated our forests is inaccurate. “The consensus … traditional reference conditions of low-severity fire regimes are inaccurate for most forests of western North America. Instead, most forests appear to have been characterized by mixed-severity fire that included ecologically significant amounts of weather-driven, high-severity fire.”[4]

Similarly, Hessburg using air photos to detect forest stand composition and density east of the Cascades, concluded: “Evidence for low severity ﬁres as the primary inﬂuence, or of abundant old park-like patches, was lacking in both the dry and moist mixed conifer forests. The relatively low abundance of old, park-like or similar forest patches, high abundance of young and intermediate-aged patches, and wide-spread evidence of partial stand and stand-replacing ﬁre suggested that variable ﬁre severity and non-equilibrium patch dynamics were primarily at work.”[5]

I can’t explain why there are different interpretations of the historical conditions, but one source of conflict is the use of fire scar studies to recreate the forest stand and fire histories of these forests. Some authorities believe there are inherent methodical biases in fire scar studies. [6]

Also, keep in mind that by happy coincidence, short fire rotations, and the paradigm that dry forests were almost uniformly open, park-like stands favors logging. Given the Industrial Forestry Paradigm that dominates forestry schools and thus, foresters working for public land management agencies, it is not surprising that they support some “management.” If there were no logging, there would be no jobs for foresters. That has to influence how you see the need for manipulation of the forest ecosystem.

As the writer, Upton Sinclair noted: “It is difficult to get a man to understand something when his salary depends on his not understanding it.”

In any event, I would posit that most of the “vegetation treatments” (a euphemism for logging) are creating conditions that did not exist or were far less common than assumed. It is important to note that what agencies call “healthy forests” is not the same as “healthy forest ecosystems. It is biased towards preserving green trees, which are fodder for timber production. These management activities, particularly the removal of trees, are creating a deficit in our forests for carbon, for biomass, for ecological processes that maintain healthy forest ecosystems.