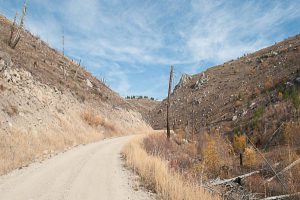 Like zombies rising from the dead, legislators continue to push the flawed notion that logging can preclude large wildfires and protect communities.

The “Emergency Wildfire and Public Safety Act of 2020,” which was introduced by Senators Daines and Feinstein is yet another example of the failure of our politicians to use science to guide effective legislation.

All larger wildfires are driven by climate/weather, not fuels. Extreme fire weather includes low humidity, high temperatures, drought and, more importantly, high winds. If you have high winds, you can not stop or slow a wildfire by logging or any other “fuel reduction”.

If fuels were the primary cause of large wildfires,  the coastal forests of Oregon and Washington would be ablaze. These forests have more fuel per acre than a hundred acres of mountain woodlands. But there are virtually no fires in these coastal forests. Why? Because the climate is cool and moist.

However, when you have extreme fire weather, nothing stops fires—until the weather changes. That is the conclusion of fire researchers at the Missoula Fire lab. They found:[1] “Extreme environmental conditions . .overwhelmed most fuel treatment effects. . . This included almost all treatment methods including prescribed burning and thinning. . .. Suppression efforts had little benefit from fuel modifications.”

As written the legislation would reduce environmental regulations and public oversight while fast tracking logging far from communities and homes. It calls for creation of “fuel breaks” of up to 3000 acres (an acre is approximately the same size as a football field). Never mind that large wildfires regularly eject embers that can cross extensive areas without any fuels. For instance,   the Eagle Fire in Oregon jumped the mile and half width of the Columbia River or the Carr Fire in California jumped the Sacramento River.

Numerous researchers have emphasized that it is the flammability of the home that determines the vulnerability of houses to wildfire. Logging miles from communities provides no added benefits in reduction of wildfire threat.

For instance, a paper from the Missoula Fire Lab researchers concluded: “It may not be necessary or effective to treat fuels in adjacent areas in order to suppress fires before they reach homes; rather, it is the treatment of the fuels immediately proximate to the residences, and the degree to which the residential structures themselves can ignite that determine if the residences are vulnerable.”[2]

Logging roads are a chronic source of sediment in streams, damaging trout waters across the West. Since most ignitions start on or near roads, more roads, ironically will increase the likelihood of more fires.

This may be one reason for the findings of Bradley et al. who reported: “We investigated the relationship between protected status and fire severity applied to 1500 fires affecting 9.5 million hectares between 1984 and 2014 in pine (Pinus ponderosa, Pinus jeffreyi) and mixed-conifer forests of western United States… We found forests with higher levels of protection had lower severity values even though they are generally identified as having the highest overall levels of biomass and fuel.”[4]

Logging also increases the chances for a fire by putting more fine fuels on the forest floor and opening up the forest to greater drying and wind penetration. Logging also compacts soils, spread weeds, and disturbs sensitive wildlife.

Logging reduces carbon storage and releases far more carbon into the atmosphere than wildfire. According to recent research, the amount of biomass combusted in high-severity crown fire is greater than low-severity surface fire, but difference is small. While the probability that treated forests will be exposed to fire while effective (~20 yrs) is extremely low. Thus, most thinning projects do little to preclude fires, but immediately release more carbon into the atmosphere.

Law and Harmon in a 2011 paper reiterate this concept. “Thinning forests to reduce potential carbon losses due to wildfire is in direct conflict with carbon sequestration goals, and, if implemented, would result in a net emission of CO2 to the atmosphere because the amount of carbon removed to change fire behavior is often far larger than that saved by changing fire behavior, and more area has to be harvested than will ultimately burn over the period of effectiveness of the thinning treatment.”[5]

Ironically, this legislation will contribute to greater CO2 emissions which are the main factor in climate warming, which in turn creates favorable conditions for wildfire spread.

None of these “costs” of logging will get serious consideration if this legislation is passed.

Some might say all these impacts are worthwhile if logging prevented large wildfires. But the science is clear on this topic and the overwhelming evidence is that thinning/logging can’t preclude large climate/weather-driven blazes.

The Daines-Feinstein legislation is misguided. The best way to assist communities is to provide financial resources to improve the resistance of homes to wildfires and community preparedness. Long term we must also address CO2 emissions which are the ultimate source of climate warming driving large wildfires.

[1] Objectives and considerations for wildland fuel treatment in forested

[2] Objectives and considerations for wildland fuel treatment in forested