Lessons From The Effort To Designate The Absaroka Beartooth Wilderness 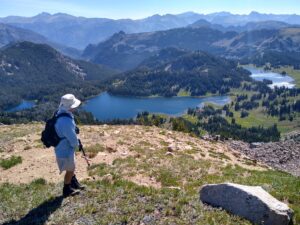 The Lake Plateau, part of the 900,000-acre plus Absaroka Beartooth Wilderness. Photo by George Wuerthner

Years ago, I moved to Livingston, Montana. Livingston strategically lies at the northwest corner of the Custer Gallatin National Forest’s Absaroka Beartooth Wilderness (known as AB Wilderness). One of the factors that attracted me to Livingston was the AB Wilderness. I could—in theory—put on a backpack and walk 7 miles to Livingston Peak within the AB Wilderness Boundary, then hike south for 250 miles and only cross three roads. There are few places in the lower 48 states where such an experience is possible.

I have not yet done that hike. But with wilderness protection, such a traverse is always possible. Every time I look up at the mountains, I am thankful for the ardent conservationists who worked to protect these wildlands.

Last week I did a week-long backpack by way of the Upper Boulder River into the Lake Plateau, one of the many high elevation sub-units of the AB Wilderness. The Upper Boulder, which was part of the Slough Creek Corridor, was once one of the biggest obstacles to creating a unified more than 900,000-acre wilderness, one of the largest wilderness areas in the lower 48 states. The Absaroka Beartooth Wilderness was designated in 1978 after much controversy.

The effort to protect the entire AB Wilderness offers a counter-argument to those who believe the only way you can get new wilderness designations is by arranging compromises through collaboration with opponents like the timber industry, mountain bikers, ranchers, and other interests. I hear from young staffers how “hard” it is to get wilderness designated today.

However, compared to the 1970s, when you had significant industries dependent on forest lands for their economic survival, today’s opposition from a nearly dead timber industry or mountain bikers is relatively speaking—insignificant. A common refrain in Montana in the 1970s was “you can’t eat the scenery” meaning without resource extraction there would be no economy.

Today due to a reduction in resource extraction industry influence,  almost all communities in Montana and throughout the West recognize that protecting wildlands contributes to economic vitality—something that was not apparent to most people in the 1960s and 1970s.

The basic take-home lesson of the AB Wilderness effort is don’t compromise your proposal upfront through collaboration. Advocate for what you believe is the best outcome for the land, wildlife, and wildlands. Politics is not a straight line, and a fair amount of serendipity surrounds all legislative proposals. 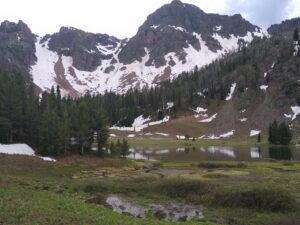 The volcanic Absaroka Range is part of the western part of the AB Wilderness. Photo George Wuerthner

These units were an administrative, regulatory policy that made protection of wildlands character a Forest Service priority. However, primitive area boundaries could be modified or even eliminated by any Forest Supervisor’s administrative decision, so did not provide more permanent protection.

This administrative discretion led to the effort to establish a more permanent system of wildlands protection. After many attempts, Congress passed the 1964 Wilderness, which created a federal system of protected landscapes.

The effort to protect the AB Wilderness was mired in controversy. The Boulder River Canyon separated these two areas.  There was some reluctant support or perhaps the better way to characterize it, less opposition for the high alpine country and a 400,000-acre Beartooth Wilderness.  However, the lower elevation, more forested Absaroka Range to the West of the Boulder River, was eyed by the timber industry. At the time, at least eight sawmills in the region relied on wood fiber from the area. 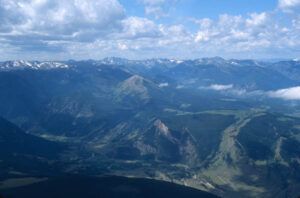 Other opponents of wilderness designation were sheep ranchers who grazed their livestock on the high alpine plateaus, the oil and gas industry which wanted to drill for oil near Red Lodge, mining interests who had mineral claims scattered about the area, chamber of commerce’s who in those days thought all economic prosperity depended on resource development. Still, the greatest opposition focused on what was known as the Slough Creek Corridor. 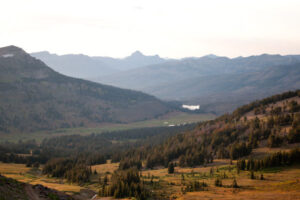 Headwaters of the Stillwater River and Lake Abundance from Daisy Pass by Cooke City–part of the Slough Corridor route. Photo by George Wuerthner

They argued a paved road would improve tourism by shortening the distance between Yellowstone’s Northeast Entrance and the main highway (now Interstate 90) that ran through Billings to Bozeman. The Forest Service also planned significant timber sales in the Boulder River and Slough Creek drainages.

During the 1970s, the Slough Creek Corridor was regularly traveled by dirt bikes, sometimes jeeps, and snowmobiles in winter. In the 1970s, dirt bikes regularly caroused about the lake-studded Plateau, which I visited. 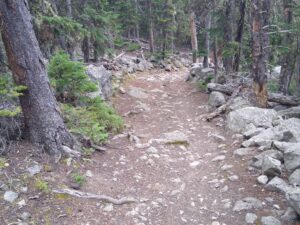 In the early 1970s, Francis Walcott, head of the Sierra Club Wilderness Committee, spent his summers exploring the AB area. He put together a bold proposal to join the two primitive areas into a unified 850,000-acre wilderness, eliminating the Slough Creek Corridor. (As an aside, I met Francis in Missoula while I was a student at the University of Montana when he spent a couple of nights at my house showing me maps of his proposal). His enthusiasm for an enlarged AB Wilderness was contagious.

Walcott’s proposal was enlarged by Bob Anderson, who grew up in Livingston on the Northwest corner of what is now the AB Wilderness. Anderson was a grad student at Montana State University at the time. He produced a report for the Absaroka Beartooth Task Force (which he created) calling for a 900,000-acre unified wilderness.

He advocated that “ecological principles form the basis for making management and use decisions” and rejected the smaller proposal by declaring “a compromise which trades areas of high wilderness values for areas with developable resources in an attempt to please the most people (or offend the fewest).”

Anderson went on to chair the Montana Wilderness Association and help found and served as an ED of the Greater Yellowstone Coalition.  He died in a car accident in 2013 in a vehicle accident in Africa, immediately after summiting Mount Kilimanjaro.

The Montana Wilderness Association (MWA) led by MWA President Cecil Garland, which up to that time had only endorsed the smaller 400,000 Beartooth Wilderness, adopted Anderson’s enlarged proposal. ( Cecil Garland had refused to compromise over his plan for 240,000 Lincoln Scapegoat Wilderness which he successfully shepherded to designated wilderness in 1972). Joining the MWA was Steward Brandborg, of the Wilderness Society.  Brandborg grew up in Montana’s Bitterroot Valley, where his father was the Forest Supervisor on the Bitterroot National Forest.

(By the early 1970s, I was also exploring the Absaroka Beartooth area and tangentially involved in promoting the area for a wilderness–my very first national publication was an article the Wilderness Society’s Living Wilderness magazine on the proposal to create the AB Wilderness.)

In 1974 the Forest Service came out with a new proposal for the primitive areas, proposing 540,000 acres as wilderness, but in two separate units. Opposition from the timber industry was loud and vocal, as were the voices of snowmobile clubs from Billings to Bozeman. Livingston’s mayor proclaimed that the loss of timber would put most of the seven mills in Livingston and Bozeman that relied on wood from the area out of business. (There is still a mill operating in Livingston today).

However, Hank Rate, a former Forest Service district ranger, declared that “Slough Creek is as pure wilderness as anyplace in the world today.., If it’s not included, the wilderness, as we natives know it, is gone” (Rate still lives in Corwin Springs near the wildlands he loves). 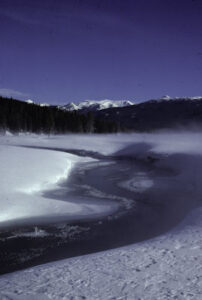 However, due to the intense lobbying efforts of the MWA, TWS, and wilderness advocates like Bob Anderson of Livingston, Hank Rate of Corwin Springs, Liz Smith of Bozeman, Randall Gloege of Billings, Rick Reese of Bozeman and Bill Cunningham of Helena, public support for the larger wilderness proposal was growing. In 1977, Senator Lee Metcalf introduced a bill for a unified 913,000-acre wilderness. Montana Congressman Max Baucus joined Metcalf to support a larger wilderness, while Montana Senator John Melcher, and Congressman Ron Marlenee both opposed the comprehensive legislation.  Opposition joining the Off-road Vehicle crowd included the livestock industry, Chambers of Commerce from Bozeman to Billings, and the timber industry also included the AMAX mining corporation.

When Lee Metcalf died in January 1978, all of Montana’s delegation agreed to support a 900,000 acre plus Absaroka Beartooth Wilderness, which passed both houses of Congress and was signed into law March 16th, 1978 by President Jimmy Carter. We now know that protecting vast, intact wildlands contributes to biodiversity preservation, and maintenance of ecological processes, not to mention the chance to experience Nature first-hand.

I would suggest that the opposition by resource extraction industries in the 1970s had far more economic clout than a bunch of mountain bikers who might want to ride a trail in a wilderness or the greatly diminished Montana timber industry today. If anything, it is far easier to muster support for wildlands protection today than in the past.

Yet, there is a self-fulfilling tendency by many in today’s conservation movement to “get along” and “compromise.” These folks believe that only by throwing some wildlands under the wheels of “progress” can any lands be designated as wilderness.

I will note that only 3.7% of Montana as wilderness, we passed a point for “compromise” a long time ago. As David Brower of the Sierra Club opined: “Polite conversationalists leave no mark save the scars upon the Earth that could have been prevented had they stood their ground.”

Today you can still see the old “Slough Creek Corridor” pathway, which once was the playground of noisy motorized thrillcraft, now a quiet trail through the AB wilderness thanks to those who “stood their ground.” The valleys are not logged. The alpine ranges now flourish with the removal of what John Muir called “hoofed locust,” and mining claims abandoned or reclaimed are all testimony to the principle that one should always advocate for what you believe is best for the land.

As wilderness advocate Bob Anderson suggested years ago, make the best ecological and philosophical arguments in favor of wildlife and wildlands. You may surprise yourself by what you can accomplish. Both the wildlife and future generations will thank you for your persistence.