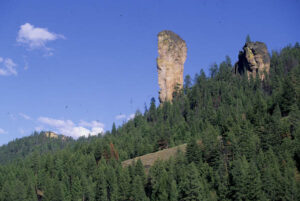 As with almost everything the Forest Service does these days, the Mill Creek “Restoration” is emblematic of the agency’s narrow perspective on what constitutes a healthy forest ecosystem. They see a “problem” where none exists and propose a “solution” that will not achieve positive results. But if you have a hammer, everything looks like a nail.

Like the old-time snake oil salesman whose magic elixirs were a cure to every ailment known to humankind, the Forest Service has, by happy coincidence, has discovered there is nothing that threatens a tree that cannot be “fixed” with chainsaw medicine.

Among other actions, the Ochoco Forest proposes commercial thinning on nearly 8,000 acres, and what it terms “actively generated” fuel treatments (prescribed and slash burning) on about 13,500 acres. Removal of biomass from the forest ecosystem with commercial logging results in significant GHG emissions.

That is why we continuously hear how the forests are “unhealthy,” since it provides a justification for “active forest management.”

Within this paradigm, the Forest Service assumes that natural sources of mortality like drought, insects, mistletoe, wildfire, and others are unacceptable and indicative of “unhealthy” forests.

Yet these biological influences are driven by climate and the forest is responding to existing climate influences. The idea that you can “restore” historic conditions fails to comprehend that the climate today is substantially different from the conditions that created the historic forest structure the Forest Service is seeking to “restore”.

This archaic attitude is reminiscent of how wildlife agencies once used to think about predators like cougars and wolves, which we now recognize are critical to maintaining healthy deer and elk populations.

Because of its timber industry bias, the Forest Service cannot accept that something other than a chainsaw is allowed to kill a tree. It is a typical example of a failure to see the forest for the trees.

One frequently heard justification for “chainsaw medicine” is the assertion that 100 years of fire suppression has led to “overstocked” and “dense” forests that are susceptible to natural mortality from drought, insects, wildfire, and so forth. 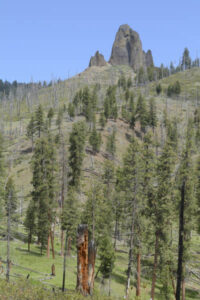 First, the idea that fire suppression has been effective fails to recognize how much natural climate variation controls fires. During the early 1900s, when the FS says fire suppression was effective, as much as 50 million acres burned across the West. Today if 10 million acres burn, we call that a “bad” fire year. https://www.nifc.gov/fireInfo/fireInfo_stats_totalFires.html

Then during the period between 1940-1980, the climate was moister and cooler than usual. And the FS was “successful” at suppressing fire. But this is typical human hubris. Nature was successful at suppressing fires. You have a shorter fire season; most ignitions naturally self-extinguish, and fires don’t spread.

Today with climate change, we see larger fires that are impossible to stop. It is not because there is “too much” fuel. Instead, we are experiencing more extreme fire weather that includes low humidity, high temperatures, and exceptionally high winds due to climate change.

Under such conditions, one cannot stop ablaze. And fuel reductions have not proven successful at halting such climate/weather-driven blazes.

With extreme fire weather conditions, we always get large high-severity blazes. This has always been true, long before any “fire suppression” or “unnatural” build-up of fuels. For instance, in the early 1700s, as much as 10 million acres burned across Washington in a single season. And the 1910 “Big Burn” charred more than 3.5 million acres in Montana and Idaho, among other large fires that occurred before “successful” fire suppression.

Furthermore, the agency ignores any science that does not support more logging. For example, the Forest Service uses a few “fire scar” studies to assert that the Blue Mountains’ dry forests were burned by frequent low severity fires every 10-25 years. These frequent blazes, they argue, would have created open park-like stands dominated by ponderosa pine. 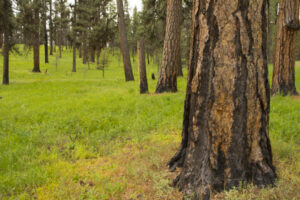 However, fire scar studies have certain biases, and are more accurate in Arizona and New Mexico, but tend to shorten the fire interval in other regions like the Blue Mountains. https://www.fs.fed.us/rm/pubs/rmrs_p029/rmrs_p029_319_334.pdf

Low-severity fire that does not kill mature ponderosa trees seen here did occur in the Blue Mountains historically–but it is wrong to conclude it was the dominant factor influencing the forest. Photo George Wuerthner

Several other studies suggest that while some parts of the Blue Mountains did indeed burn frequently, most of the dry forests did not. The fire-free interval across much of the Blue Mountains was much longer than 25 years, allowing for the growth of denser forests and occasionally mixed to high severity fires. http://dx.plos.org/10.1371/journal.pone.0136147 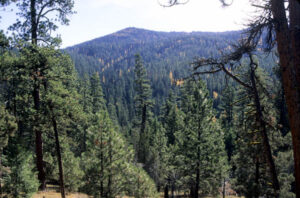 The other problem with their chainsaw medicine is that it will not preclude large blazes driven by extreme fire weather, not fuels. If you do not correctly identify a problem, you cannot correct it.

However, this is an example of where the Forest Service sees a problem where none exists. The idea that low severity fires that do not kill trees is a “good” fire, but high severity blazes that kill most trees are “bad” is outdated. The snag forests that result from high severity blazes have the second-highest biodiversity of all forest types.

A further problem with the Forest Service’s proposal is that there are individuals with a genetic adaptation that gives them “resistance” to insects, fire, drought, and other sources of mortality within any stand of trees. Unfortunately, a forester with a paint gun marking trees does not know the genetic makeup of the trees they are seeking to kill with chainsaws.  Also, removing the very trees with the greatest resistance to natural mortality sources is thus in direct contrast to their stated goal of building resiliency in the forest, contributing to creating a weakened forest ecosystem.

If your goal is healthy forest ecosystems, not a healthy supply of logs to the timber industry, you embrace natural sources of mortality like large wildfires, insect outbreaks, and drought. I might also add these biological agents “thin” the forest without any cost to taxpayers. 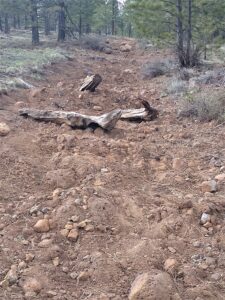 The Forest Service’s idea of a “road restoration” of a “temporary road. Photo George Wuerthner

To make matters worse, the Ochoco Forest plans to expand or “reconstruct” temporary roads or do road “maintenance” on more dozens of miles of logging roads. Logging roads are notorious as vectors for the spread of weeds, disturbance of wildlife, sedimentation sources for watersheds, soil erosion, and interruption of natural water subsurface flows. None of these things contributes to a “healthy” forest ecosystem.

Until the Forest Service begins to view healthy forest ecosystems as its goal, rather than “healthy” supplies of wood for the timber industry, it will continue to degrade our woodlands.