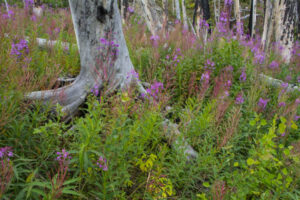 To many foresters and others who advocate for “active forest management,” a fire that results in high tree mortality is considered evidence of an “unhealthy” forest. Photo George Wuerthner

This past week I was invited to present my views on forest health and fire ecology to a group of Washington State residents and legislators by Zoom. The other presenter was a forester with the Washington State Natural Resources Department.

Of course, the unspoken underlying assumption is that foresters “know” what constitutes a “healthy” forest. Not surprisingly, the timber industry, forestry schools, and foresters tend to define forest health in terms of tree mortality. High tree mortality from any natural agent–whether drought, wildfire, bark beetles, mistletoe, fungi, or other sources– is to many foresters evidence of an “unhealthy” forest. By happy coincidence, the solution to all these health issues is to log the forest. 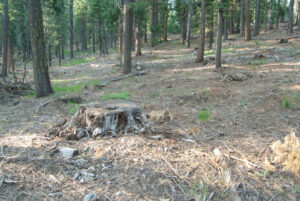 This is a Collins Pine forest stand in Northern California that is a “sustainability managed” forest. Note the lack of snags: very little down wood and forest cover. Most “sustainable” forests are more about providing a sustainable supply of wood to the mill than sustaining the forest ecosystem. Photo George Wuerthner

Most foresters share a worldview that managing forests for timber production is the same as maintaining healthy forests.

Like many of today’s more enlightened agency people, this forester acknowledged that fire had a place on the landscape. Just not that much of the landscape and not if it killed a lot of trees. 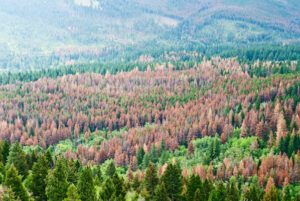 As with most foresters, he had an unspoken bias against any mortality caused by natural events. He showed a slide of bark beetle-killed trees and talked about how we “lost” the trees. I would have said we didn’t lose anything. The trees transitioned to snags, another essential component of a functioning forest ecosystem.

He noted that extensive drought in California had precipitated the bark beetle attack, and he attributed the death of trees to the forest being too dense. The solution, of course, is to log the forest. He said this with no irony.

Indeed, the way to make sure that beetles or fire didn’t kill the trees was to log them—which of course, kills them. Death by chainsaw is seen as restoration. Death from drought, fires, beetles is viewed as a “loss.”

Nowhere did he note that experts on bark beetles feel they are a “keystone” species that help shape forest ecosystem function. Nor did he acknowledge that logging a forest in advance to preclude mortality from bark beetles or fire fails to recognize that you cannot predict precisely where beetles or fire will occur. 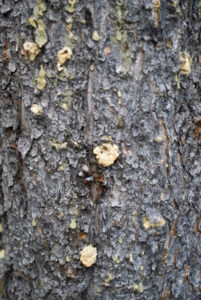 The white knobs are areas where the tree has pushed out attacking bark beetles. Lodgepole pine has a genetic variation that permits some trees to extrude bark beetles with sap more effectively. Photo George Wuerthner

The forester did not mention that many pines have genetic variation and can withstand bark beetle attacks. A forester cannot tell by looking at any tree which trees are most likely to survive insects. In logging the site, one may remove the very trees most resistant to bark beetles. Yet this logging is done in the name of creating “resilience” in the forest stand.

Bark beetles are like wolves. Just as a wolf can sense that certain elk in a herd are vulnerable, beetles have a similar ability to detect which trees are less resistant to attack.

Trees are not passive bystanders. Some trees have a genetic ability to obtain more water from the soil, even during drought, and extrude beetles attempting to penetrate the tree. Also, some trees have rougher bark that, for whatever reason, makes them more resistant to beetles.

I would have noted that the bark beetles did a fine job of thinning the forest’s density and were far better at selecting which trees have the right genetic makeup to survive drought, beetles, and other natural sources of mortality.

Allowing bark beetles to thin the forest is anathema to foresters. It doesn’t produce timber for industry and doesn’t require the “expertise” of a forester. No logging. No job. 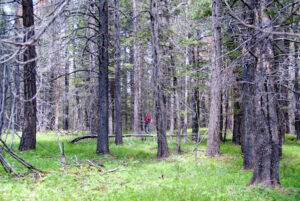 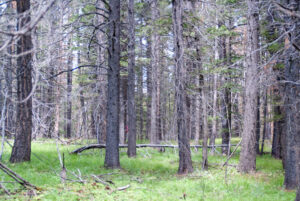 Dead trees killed by fire, beetles, drought or other sources of mortality are not a “loss.” They play a critical role in a healthy forest ecosystem. Here a person (red shirt)is nearly obscured by the trunks of dead beetle-killed trees by moving a few feet. These dead trees would serve the same purpose for elk security, making it difficult for a hunter to see the animal. Photo George Wuerthner

Plus, logging forests typically remove the site’s physical trees, reducing the biomass and potential wildlife habitat. Many wildlife species depend on dead trees for their home, foraging area, and hiding cover.

Logging also removes carbon from the site and generally entails logging roads which are a vector for the spread of weeds, entry for ORVS, and habitat fragmentation. 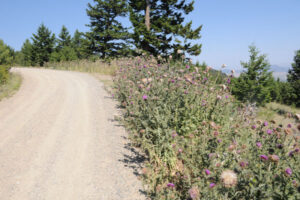 Spotted knapweed invasion facilitated by disturbance from a logging road. Roads are a major vector for the spread of weeds, an impact of “active management often minimized by logging advocates. Photo George Wuerthner

None of these ecological impacts were articulated by the forester because of his timber industry bias; a “healthy” forest is one with limited mortality.

Not surprisingly, as a forester, he was a big advocate of thinning forests to reduce fire spread and high severity blazes. Again, his negative view of high severity fires ignores that many animals depend on trees’ mortality for their survival. Some scientists suggest that the snag forests resulting from such blazes have the second-highest biodiversity after old-growth forests. But this forester’s focus was not on biodiversity. His goal was to “restore” the forests because natural sources of mortality do not achieve such restoration. 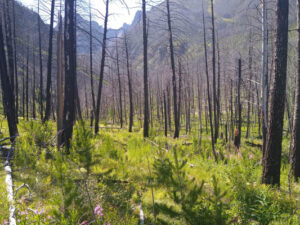 A high severity blaze created numerous snags and down wood–critical habitat for many species. Indeed, the snag forest often has the second-highest biodiversity of any habitat type after old-growth forests. Photo George Wuerthner

In my presentation, I harped that under Extreme Fire Weather conditions, particularly with wind, drought, and low humidity, no thinning or other forest management stops wildfires. I cited numerous studies that have come to that conclusion, not to mention, that I have personally seen this at all the large fires I have visited around the West. I know of no exceptions. 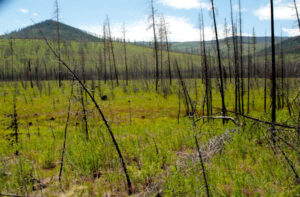 Here is the aftermath of the Jocko Lakes Fire, Montana, that burned through previously logged and thinned lands driven by high winds. Photo George Wuerthner

And yes, under less than extreme conditions, forest thinning and other management might halt a fire. However, the research also shows that the fires are often self-extinguished or are easily controlled under changed weather conditions.

I recall reading about one of the larger fires burned in Yellowstone prior to the 1988 burns. In the report, the ranger said his crew had finally gotten the blaze under control. And with no irony, in the very next sentence said, “we had a hell of a time breaking camp in the rain.”

I have seen that in numerous other current examples about the effectiveness of thinning to change fire spread. For instance, the Deschutes National Forest and the Deschutes Collaborative, who are big advocates of thinning, suggested the Millie Fire, which was headed rapidly towards the town of Sisters, was stopped by thinning. However, a careful reading of the Incident Command Fire Report suggests an alternative interpretation. After the Millie Fire had also breached much of the thinned stands, the wind changed direction by 180 degrees. It began blowing the blaze back onto the previously burned forest and eventually up into lava fields with no fuel. What stopped the fire was a change in fire weather. 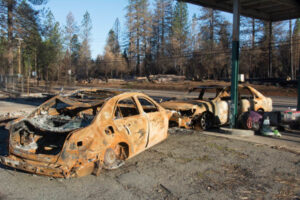 Ruins after Camp Fire burned through Paradise, California. High winds blew embers through the community igniting homes and structures. This even though the area surrounding the town had been heavily logged, thinned, and even had two previous recent fires–all of which reduced “fuels.” Under extreme fire weather, none of this made any difference in halting or slowing the blaze. Note the numerous still standing green trees. Photo George Wuerthner

In another part of his presentation, he talked about recent research by a Washington scientist suggesting that thinning could slow fire spread. Whether that is accurate, I can’t say. It’s been a while since I read the paper, and I do not recall the details.

Even though numerous scientific papers conclude that logging/thinning is ineffective under extreme weather conditions, the forester used this one paper to suggest otherwise.

I call such evidence the 99-year-old grandmother defense. It is like the argument one always hears that cigarette smoking doesn’t lead to cancer. The proof! “Oh, my grandmother who smoked three packs a day and lived to be 99 years old.” An exception does not invalidate a generalization. 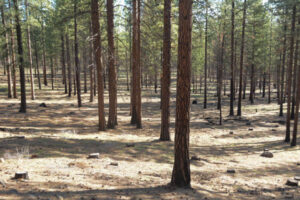 This is a forester’s dream–a sterilized forest stand on the Deschutes National Forest, Oregon. Note the absence of down wood, shrubs, other plants, no snags, and no age diversity among the remaining trees.  Thinning has reduced the “resilience” of forests. This is a nightmare in terms of a healthy forest ecosystem. Photo George Wuerthner

There were many other parts of his presentation that I could have debated or provided a different perspective. What I have seen over and over is that most advocates of “active forest management” come with an Industrial Forestry Bias. Advocates of active forest management are not malicious and do have the best intentions, but they seem unaware of their unquestioned assumptions. Their worldview supports the idea that human intervention improves our forests. However, if examined more closely, one might discover most of these interventions harm our forest ecosystems.