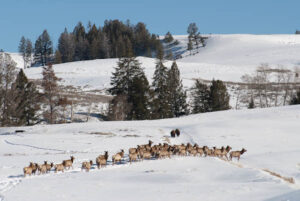 Wyoming Fish and Game Department has 22 elk feed grounds scattered around the western part of the state and feeds as many as 17,000 elk every winter. The agency currently has eight of its 22 feedgrounds on National Forest land; six on BLM land.

The operation of feedgrounds has been controversial for decades. Many wildlife advocates argue that the feedgrounds are a natural conduit for the spread of wildlife diseases like brucellosis and Chronic Wasting Disease, a prion disease similar to Mad Cow Disease in cattle.

The livestock industry strongly supports feedgrounds because they believe it reduces elk conflicts on hay fields. There is also the issue that domestic livestock consumption of public forage on federal lands in summer likely reduces the carrying capacity for wildlife in winter, and the feedgrounds hide this fact.  Feedgrounds like fish hatcheries that hide the degradation of watersheds by artificially sustaining catchable fish. 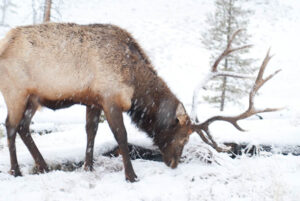 The first efforts to feed elk began with the establishment in 1912 of the National Elk Refuge by Jackson, Wyoming.

In 1929, the Wyoming legislature passed legislation making the Wyoming Department of Fish and Game financially liable for elk damage to hay crops. The Game and Fish decided the creation of feedgrounds could minimize elk-cattle conflicts. In 1929, feedgrounds were established to concentrate elk in the winter months to preclude feeding upon forage found on private ranchlands.

However, one of the negative effects of feedgrounds is that it keeps elk off naturally occurring winter range where they would be more widely distributed. The dense concentrations found at feedgrounds favors the spread of disease like brucellosis and chronic wasting disease (CWD).

Chronic Wasting Disease is a prion disease that infects ungulates like deer and elk. It involves the gradual wasting away of the brain and results in premature death. Elk and other wildlife can pick up CWD by grazing areas with infected animals through direct contact or by feeding on infected sites.

Symptoms include drastic weight loss (wasting), stumbling, listlessness, and other neurologic indicators. However, the disease takes years for an infected animal to display symptomatic effects.  So an elk can become infected and not show outward symptoms for months yet can infect other members of the herd. 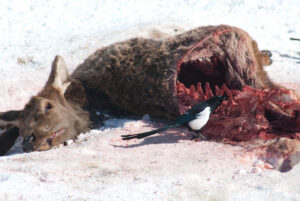 Some fear that the consumption of infected meat could result in CWD transfer to humans with similar outcomes.  If this is shown to be a significant risk to hunters, it may well result in fewer hunting licenses sold, and in turn, fewer funds for the state game and fish departments that rely heavily on hunter fees to fund their programs.

To date, there have been no reported cases of CWD infection in people. However, caution in the interpretation of these assertions since there is no way to distinguish CWD in people from other prion diseases like Creutzfeldt-Jakob disease (CJD).

However, some experimental animal studies suggest CWD poses a risk to certain types of non-human primates, like monkeys, that eat meat from CWD-infected animals or meet brain or body fluids from infected deer or elk. Brain, spinal cord, and other meat nerves from CWD infected animals are the highest titer tissues.  Thus a hunter removing an elk head for a trophic mount could risk exposure to CWD prions.

Plus, since the symptoms of CWD are similar to dementia, all prion diseases are under-diagnosed. With or without an autopsy, detection of CWD is impossible so that people could be dying from CWD but be diagnosed as death from dementia or ordinary CJD.

These studies raise concerns that there may also be a risk to people. Since 1997, the World Health Organization has recommended that all known prion diseases be precluded from entering the human food chain.

A further fear is that an infected human, but asymptomatic person, could contribute blood to the national blood banks and thus infect many thousands of people.

It is known from the experience at hundreds of game farms that concentrations of ungulates facilitate the spread of CWD.  Recently CWD was discovered among elk in Grand Teton National Park and is likely to occur among elk at the National Elk Refuge as well. CWD is found throughout Wyoming and has recently been detected in many parts of Montana.

Many believe the spread of CWD to Montana is the result of natural migratory patterns of wildlife. A deer or elk, for instance, could become infected at a feedground on its winter range and travel a hundred or miles or more to its summer range, and infect other ungulates there. 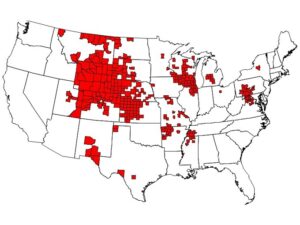 Occurrence of Chronic Wasting Disease in the United States.

Ironically though CWD appears to be widespread in Wyoming, Colorado, and Montana, it has not been detected in Idaho. However, that may be due to insufficient testing procedures. Don’t look. Don’t find. CWD is also found across the country, with concentrations in the Upper Midwest, Pennsylvania, and New York. It is also commonly found in Alberta and elsewhere in Canada.

One unappreciated repercussion of CWD is that a significant decline in elk or deer herds may reduce the carrying capacity for the ecosystem’s predators. Less elk or deer could result in less food for carnivores. Less carrion would impact everything from magpies to grizzlies.  Ironically, there is good evidence that carnivores like wolves can detect CWD in animals long before the disease effects become apparent to humans. 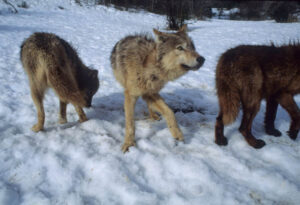 Thus, wolves and other predators may help to limit the spread of CWD. Yet states like Montana, Wyoming, and Idaho have targeted wolves for reduction and may, in effect, contribute to the more repaid spread of CWD among ungulates.

Of course, the opportunity to observe wild elk is also a significant attraction to tourists and residents alike.  A widespread outbreak of CWD in the herds could jeopardize wildlife viewing opportunities.

In response, this past winter, the Wyoming Legislature passed a statute requiring the Game and Fish Department and Commission to submit any proposal to close a feedground to the Wyoming Livestock Board for review before it heads to the governor. It would also require the replacement of any feedgrounds closed on federal lands.

The feedgrounds have been a perennial controversy for decades, and it does not seem like they will go away anytime soon. However, getting feedgrounds off federal lands may preclude the spread of the disease to new areas.

2 Responses to Groups Sue To Eliminate Elk Feedgrounds in Wyoming