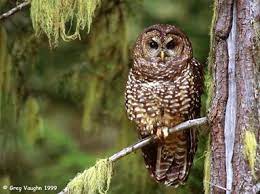 A couple of years ago, I attended a meeting of the Deschutes Collaborative. Spotted Owls and wildfire was the topic that day. The meeting was a classic example of how collaboratives selectively use science to justify more logging of our forests.

Not too surprisingly, the central theme of the presentation was how wildfire was “destroying” Spotted Owls and contributing to their demise.

The biologists gave overviews of the habitat needs of the Spotted Owl, emphasizing how the growing acreage of wildfires was a threat to the owl’s continued existence because it sometimes charred the owl’s preferred habitat–old-growth forest stands.

The solution was to log the forests. Not clearcut them, of course, but “thin” them so they would not burn. (Note that the assumption that thinning actually precludes large wildfire is questionable).

Before the meeting, I had reviewed several papers that I had on fire and Spotted Owls. These newer studies had a more nuanced view of wildfire and Spotted Owl. They showed that wildfire, particularly high severity fires, did not necessarily harm the owl. Indeed, they may even promote the owl’s survival by creating habitat for owl prey.

BIOLOGY OF SPOTTED OWLS AND EFFORTS TO SAVE THEM

The Spotted Owl has become an icon of Pacific Northwest Forests and on-going debates about forest management. The birds live almost entirely in mature and old-growth trees. Their favorite habitat consists of abundant down woody debris (alias logs) and standing snags.  The owl prefers multi-layered canopies of forests at least 150 to 200 years old. 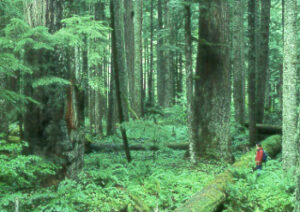 It is not only the loss of old-growth habitat but the fragmentation of that habitat. The miles of logged-over landscapes isolate Spotted Owls, making it more difficult for owls to recolonize vacant suitable territories. The open landscapes created by logging leads to greater predation on young owls once they leave the intact old-growth patches. 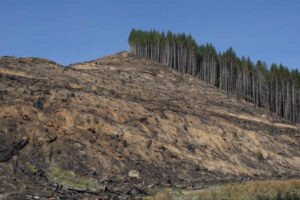 Cutting some of these mature/old-growth forests was largely outlawed by the 1994 Northwest Forest Plan, which ostensibly set aside owl habitat from logging. 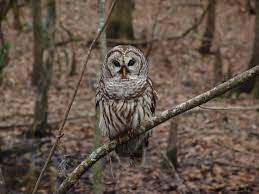 The Barred Owl is an eastern species similar to the Spotted Owl, but more adaptable which has recently colonized the West. Photo US FWS.

A new threat to the Spotted Owl has come from the Barred Owl, another native species that has recently moved West. The Barred Owl is more tolerant of logging activities and is displacing the Spotted Owl. https://www.fws.gov/oregonfwo/articles.cfm?id=149489615#:~:text=Barred%20owls%20are%20larger%2C%20more,compete%20with%20them%20for%20food.&text=Because%20the%20spotted%20owl%20is,presence%20is%20an%20added%20stressor.

Climate change may play a role in the owl’s long-term survival—assuming it can persist long enough to matter. One of the reasons for their dependence on old-growth forests is they have limited ability to regulate their temperatures in hot situations.

To make matters worse for the Spotted Owl, one of the last acts of the Trump administrations upon leaving office was to publish a rule that excluded 3,472,064 acres, mainly in Oregon, from the bird’s critical habitat designated under the Endangered Species Act.

The exclusion reduced the northern Spotted Owl’s critical habitat from about 9.6 million acres to about 6.1 million acres.

Environmental groups have sued to stop the implementation of the plan, and the Biden administration has vowed to review the Trump rule. 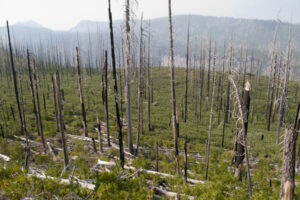 Contrary to common perception, dead trees are not a “wasted resource.” They are wildlife habitat.

Most forest fires burn in a mosaic pattern with patches of high severity, mixed severity, and lightly burned areas. High severity burns tend to promote the growth of wildflowers and shrubs whose seeds increase food for small rodents, while the down wood and snags provide hiding cover for them.

Owls still need old-growth forests for nesting and roosting, but they selectively hunt their prey in burned landscapes. A situation some biologists have characterized as a bed and kitchen situation. 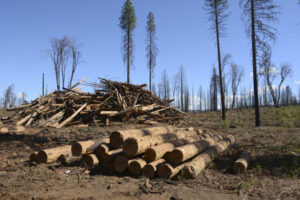 Nevertheless, some studies suggest that wildfires posed a threat to Spotted Owls. An analysis of the aftermath of the King Fire, one of the largest in the California Sierra Nevada, concluded that Spotted Owls were negatively impacted. The researchers found “The probability of owl site extirpation was seven times higher after the fire (0.88) than before the fire (0.12) at severely burned sites, contributing to the greatest annual population decline observed during our 23‐year study.” https://esajournals.onlinelibrary.wiley.com/doi/full/10.1002/fee.1298

Though critics of this study believe the research, based on one year of data, failed to account for the natural colonialism and extinction that randomly occurs in all owl populations. 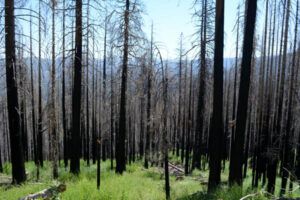 More recent research by the same authors found that owls, while using high severity patches, did not penetrate them far from forest cover. So larger high severity patches are zones of limited foraging by owls. https://link.springer.com/article/10.1007/s10980-020-01010-y

A study of Spotted Owl uses of burned patches found that fire is a different type of disturbance than logging. The research revealed “a surprising number of Spotted Owl sites continue to be occupied and reproductively successful after experiencing fires of all intensities and that populations are quite resilient to fire. 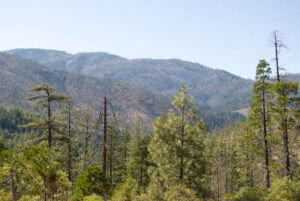 According to a 2020 recent review study by Derek Lee, principal scientist at the Wild Nature Institute and associate research professor at Penn State University, Spotted Owls appeared to increase in areas with high severity blazes.  Lee found, “Spotted Owls were usually not significantly affected by mixed‐severity fire, as 83% of all studies and 60% of all effects found no significant impact of fire on mean owl parameters. Contrary to current perceptions and recovery efforts for the Spotted Owl, mixed‐severity fire does not appear to be a serious threat to owl populations; rather, wildfire has arguably more benefits than costs for Spotted Owls.” https://esajournals.onlinelibrary.wiley.com/doi/full/10.1002/ecs2.2354 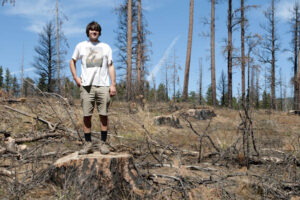 However, while wildfire may not pose a threat to the owls, several studies found that logging was detrimental to Spotted Owls. A study in southern Oregon concluded: “Owls avoided burned areas where clear cut salvage logging had taken place.”

In particular post-fire logging may be a contributing factor in Spotted Owl decline after a significant fire rather than the fire itself. Dr. Chad Hanson, Research Ecologist with the John Muir Project, says: “It turns out that the decline in Spotted Owl populations that sometimes occurs after forest fires is being driven by destructive post-fire logging practices, not by the fires themselves.” https://phys.org/news/2021-04-analysis-owls-post-fire.html

Removal of snags may impact prey the owls utilize. https://phys.org/news/2021-04-analysis-owls-post-fire.html

With logging, climate change barred owls, and in some cases perhaps, wildfire, the owl’s future is in jeopardy. While we can’t do much about precluding wildfire, we can stop logging in all owl habitat, including post-fire logging.