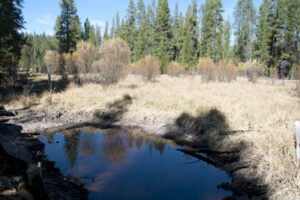 It is not every day that one can claim success in fighting public land degradation from domestic livestock. But the Fremont Winema National Forest in Oregon finally responded to conservationists’ concerns (and lawsuits) about the impact of livestock grazing on endangered Oregon spotted frog and other wildlife within the Antelope Grazing allotment. The allotment and Jack Creek drainage also support rare mollusks, the endangered Miller Creek lamprey, and many rare fen plants.

It demonstrates the adage, endless pressure, endlessly applied, can sometimes result in a positive outcome.

The 90,000-acre Antelope Grazing Allotment is located near Chemult, Oregon. The allotment contains unique fens and geological hydrology that has created extensive wetlands. Since the uplands are mainly dry lodgepole pine forests growing on volcanic ash from the Mount Mazama eruption (which created Crater Lake), almost all the forage available on the allotment exists in the wetlands and riparian areas. 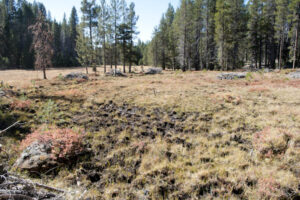 Livestock damage to stream channels is well documented.  These directly impact the Oregon spotted frog. There is a loss of deep pools needed by the frog for overwintering, loss of undercut banks as hiding cover from predators, and a drop in water tables resulting from headcutting of streams.

There are more than 5000 acres of wetlands and fens on the allotment. A hydrological survey of these springs and fens found that all eight fens in grazed areas were degraded, but 10 out of 11 in ungrazed areas were in good condition. 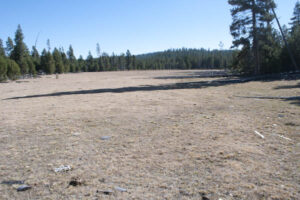 Meadow that should sustain tall grass is grazed down to shorter than a golf course putting range. Photo George Wuerthner

Jack Creek, the primary drainage in the allotment, is habitat for a population of Oregon spotted frog and one of only five known populations in the Klamath Basin. Since this population was discovered in 1996, its numbers have plummeted from at least 335 down to fewer than 20 known breeding females. In 2013, cattle were documented trampling streambanks and wetland and riparian vegetation, dewatering pools, and lowering water quality with their waste – severely damaging much of the spotted frog’s habitat.

The Oregon spotted frog was historically found in 61 locations from British Columbia to northern California, but today are relegated to 13 known populations in about 30% of their former range. Because of this shrinkage of known populations, the frog was listed as a threatened species under the Endangered Species Act (ESA) in 2014.  The listing rule identified livestock grazing as a threat to the Jack Creek population, noting the increased threat during low water conditions.

Oregon spotted frogs are the most aquatic of Pacific Northwest frogs and are almost always found in water. As the wetlands and creeks dry out, the frogs are concentrated in small pools of habitat, making them vulnerable to predators and even loss if the wetlands dry up completely.

I am always baffled why the Forest Service and other agencies fight to maintain livestock grazing on critical natural areas. Even without the presence of the Oregon spotted frog, the Jack Creek drainage and associated fens is unique in the entire Northwest. One permittee enjoys the grazing on the allotment, which is well documented by even the Forest Service to be damaging public resources, including the Jack Creek hydrology. 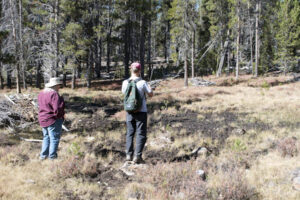 As usual, it takes a lawsuit to make the agency follow its regulations and laws.

As a result of a 2019 lawsuit filed by Advocates for the West on behalf of Western Watersheds Project, Oregon Wild, Klamath Siskiyou Wildlands, Great Old Broads for Wilderness and Concerned Friends of the Winema, the Forest Service reduced grazing to 500 acres of the entire 90,000-acre allotment management plan. Furthermore, cattle numbers were reduced from 700 pairs to 95. The Center for Biological Diversity had joined the other groups in an earlier 2015 lawsuit challenging livestock damage on the same federal lands.

Another requirement was the use of range riders (presumably to keep cattle from congregating in streams, and annual inspection of fences to ensure they are in good repair before cattle turn out.

The permittee was given a “Notice of Noncompliance” for overutilization and “unauthorized use.”

Therefore, the permittee’s season of use was reduced, and he lost the use of one of the pastures for the next two years.

Ultimately given the small populations of Oregon spotted frogs and the unique collection of fens and wetlands in this area, livestock grazing should be eliminated. The Jack Creek drainage should be set aside as a research natural area or some other protective designation. Senator Ron Wyden (Oregon) has introduced legislation to designate Jack Creek under the Wild and Scenic River Act.  The reduction in livestock use occurring now is a good first step in this effort.