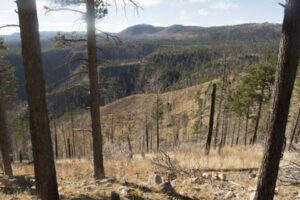 The aftermath of the Las Conchas  Blaze in 2011 in the Jemez Mountains of New Mexico. Photo George Wuerthner

An excellent overview of wildfire issues was published in the Revelator. https://therevelator.org/wildfire-archive/

I encourage folks to review it.

I especially appreciate the linkage of recent large fires to drought and warming temperatures. That is what is driving these fires across the West, and it is good to see the Revelator making this a central theme. Westwide, we are experiencing some of the most severe drought of the past 1000 years. This, more than any other factor, is driving large blazes across the West. 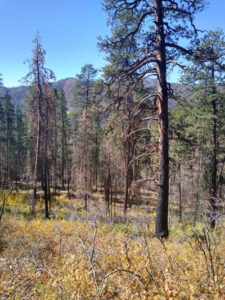 Snags created by the Hermosa Fire near Durango. Many species from fungi to fish to birds depend on the snag forests that result from high severity fires are critical to forest ecosystem health. Photo George Wuerthner

I also am grateful that the author recognized that many species for their survival often need wildfire. I’ve seen some references that suggest as much as 2/3 of all species depend on dead trees for some part of their life requirements (trees can be killed by fire, drought, beetles, etc.). We need large fires to maintain healthy forest ecosystems. Fires do not “destroy,” “degrade,” or “devastate” forest ecosystems. Rather they rejuvenate them.

However, there are a few things that would improve any future articles.

The last part of the article doesn’t match the above elements that link climate and fires. It used the old “fire suppression” argument as a cause of large blazes. Fire suppression is greatly exaggerated as the cause of these fires.

First, most of the ecosystems around the West have exceptionally long fire rotations. 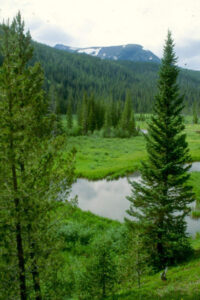 Spruce forest in Rocky Mountain National Park, like most vegetative communities in the West, tend to burn at fire rotations of hundreds of years and have not been impacted by “fire suppression.” Photo George Wuerthner

Diverse plant communities with long fire rotations include sagebrush, chaparral, aspen to fir, spruce, lodgepole pine, juniper, hemlock, and many others that naturally remain without significant blazes for decades to hundreds of years. That is far longer than any successful fire suppression has been implemented. Even if fire suppression were “successful,” plant communities with long rotations have not been influenced. Not enough time with “suppression” has occurred to alter their natural fire regimes radically.

The only exception is dry, mostly pine forests like those dominated by ponderosa pine and associated species like Jeffrey pine, which tend to have shorter fire rotations. But these ecosystems make up a small percentage of the acreage burned annually.

Second, the influence and effectiveness of fire suppression are greatly exaggerated. Most of the so-called fire suppression was the result of climate/weather. If it’s cooler and moister, there are fewer ignitions, and fires don’t spread. 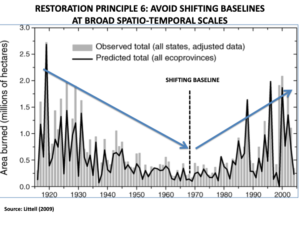 The entire period from the late 1930s to the late 1980s was a cooler period relevant to prior decades and since the 1980s. That cool weather reduced ignitions and the size of fires. Yet this is the time period most people use to suggest we see “larger fires.” Indeed, back in the 1920s and early 1930s (major drought–remember the “Dust Bowl”), we saw as much as 50 million acres burning across the West.

Hence, some suggest that “fuel build up” due to fire suppression is a natural consequence of cooler and moister climate. I.e. Nature does a fine job of suppressing. Change the climate, and there is a corresponding change in fire size and frequency.

This dwarf the current “bad” fire years of 10 million acres burning. People who want to log the forest use a “shifting baseline” to justify “active forest management.”  Since the 1980s, we have seen larger fires, but they are not abnormal given the change in climate/weather. We are seeing hotter, drier weather everywhere in most of the West and that is what is driving the large blazes.  https://agupubs.onlinelibrary.wiley.com/doi/10.1029/2020GL092269

An experiment in Yellowstone NP demonstrates how climate/weather affects fires. Between 1972 and 1987, some 235 backcountry fires were permitted to burn without any suppression. Of those 235 blazes, 222 burned less than 5 acres, and most burned an acre or less. A few fires grew more extensive, but none were exceptional—all 235 self-extinguished on their own. 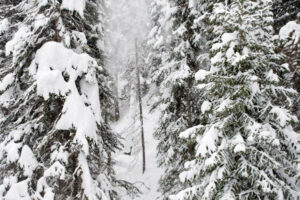 Despite the efforts of 10,000 firefighters, what halted the 1988 Yellowstone Fires was snowfall on September 11th. Photo George Wuerthner

Then in 1988, more than 1.5 million acres in the Yellowstone ecosystem burned. What changed. Was there suddenly a lot more fuel than in 1987 or 1986? If fuels drive big fires, why didn’t any of those ignitions turn into major blazes?

The answer is that fuels do not drive large fires. What happened is that 1988 was the driest year on record for Yellowstone since records began in the 1870s. In addition, to significant drought conditions, the humidity was extremely low. Live, green trees had internal moisture of 1-2%.

Finally, there were days when winds blew 50 mph or greater. All of these factors created the ideal conditions for extensive fires. And despite 10,000 firefighters trying to control the blazes, it was again climate/weather that ended the fires on September 11th when snow “put out” the historic fires.

What drives all large fires in specific extreme fire weather conditions. These include drought (we have lots of it now), low humidity, high temps (increasing temps), and most importantly, wind. Wind drives flames exponentially, not linear. A 20-mph wind doesn’t double fire spread over a ten-mph wind but quadruples it. Imagine what a 50-80 mph wind does to fire spread, and you understand why we are getting much larger blazes. 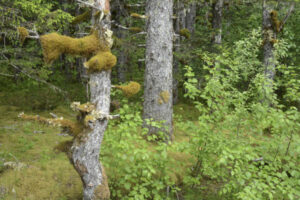 Coastal forests like this site on the Chugach National Forest, Alaska almost never burn even though they have more biomass than most places on Earth. Photo George Wuerthner

If fuels were driving these large fires, the coast of Alaska, Oregon and Washington, which have the most significant biomass (i.e., fuel) in the country, would be ablaze. They are not. Why? Climate and weather.

Finally, the piece suggests the loss of Indian burning is contributing to the large fires. It is fashionable to suggest that fires are a consequence of the removal of that influence due to fire suppression, but it does not hold up to scrutiny for the same reasons as above. 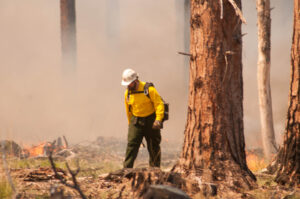 Ignitions, whether natural sources or humans, do not burn a significant portion of the landscape unless you have extreme fire weather. Most Indian burning, like today’s prescribed burning was not initiated during extreme fire weather. Without the right conditions, fires don’t spread. Photo George Wuerthner

Again, it doesn’t matter what or who the ignition source is, whether humans or lightning; if you don’t have the right conditions for ablaze, you don’t burn much.

Research by many fire ecologists questions whether Indian burning was compensatory or additive. In other words, did human ignitions burn more land than what would have burned without humans?

In most instances, the answer is no. The burning effect was very localized in and near high human use areas like village sites and major camping areas. But the influence of Indian burning across the landscape was negligible. Much of the “evidence” for the Indian burning effect is based on localized studies that did indeed find increased burning but then extrapolated to the larger landscape. But when scientists look for evidence of this influence across the broader landscape, it is not there. I could explain why this is the case, but suffice to say, Indian burning is a flawed argument. It didn’t make much difference in fire rotations or regimes. https://rewilding.org/indian-burning-myth-and-realities/

This is why prescribed burning efforts are also ineffective in the age of climate change. All large fires occur during extreme fire weather conditions, and under these conditions, burning, thinning, etc., has almost no influence on fire behavior and spread. Fires regularly burn through all these “fuel reduction treatments.”

We still see politicians, the Forest Service, Cal Fire, and other agencies promoting thinning, prescribed fire, and other “fuel reduction treatments” as a panacea for large blazes.

The only thing that will change the way wildfire burn is to change the climate/weather. Until we deal with climate warming, we have to accept that large fires are inevitable. 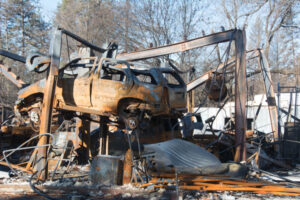 The Camp Fire destroyed Paradise California. We can’t prevent large fires by “fuel treatments” but we can preclude homes losses by focusing on fire-safe practices in communities. Photo George Wuerthner

We can treat our communities and homes to make them more resilient in the face of fire. That should be the emphasis of state and federal fire policies. Unfortunately, when you look at the budgets for these government agencies and listen to the foresters and forestry schools whose funding depends on more logging, you get an entirely different perspective on wildfire causes and solutions.