Montana Fish, Wildlife and Parks Proposes to Sell Out Wildlife During Drought 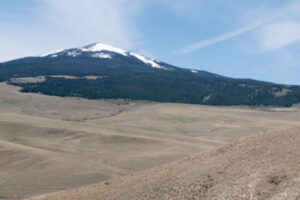 The Montana Department of Fish, Wildlife and Parks (MDFWP) announced that due to the extreme drought conditions across Montana, it would open up some wildlife management areas (WMA) to livestock grazing and haying. And it will keep any WMA currently being grazed or hayed open for that use, despite the drought’s effects on wildlife.

Some of the most critical wildlife management areas are included in this proposal, including Blacktail, Fleecer Mountain, Nine Pipes, Smith River, among others. 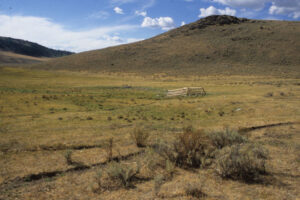 If there is any time when wildlife needs the limited production of vegetation that occurs during a drought, it is now. During a severe drought, grass production is reduced up to 1/3 of what might otherwise occur on a site. And now MDFWP is proposing to put even that limited vegetation into the bellies of exotic animals as grazed forage or hay. 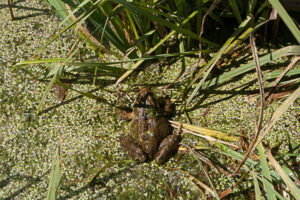 Wildlife is more than elk and deer. Many species are harmed by haying and grazing, including amphibians when hiding cover is eliminated or wetlands are trampled. . Photo George Wuerthner

Governor Gianforte is pushing MDFWP to make the forage available, although wildlife management areas should put wildlife needs first. To add insult to injury, MDFWP proposes to allow all grazing for free. In other words, ranchers will not be charged a cent for the forage, and you can bet they will not have to pay anything for any damages done to these areas by haying or grazing.

In their draft environmental assessment, Emergency Grazing and Haying Leases on Select FWP Wildlife Management Areas, the Department lists a few presumed benefits of haying and grazing while downplaying the negatives, mostly claiming they will be short-lived. Though it does admit in a final paragraph: “There may be debate by some as to the nature of the impacts of the Proposed Action, as there are varying perspectives as to the effectiveness of workings lands approaches to habitat improvement and conservation.

In short, the Department recognizes that most of the “benefits” are spurious at best, while the impacts are significant. But never fear; the agency is looking out for wildlife and will “monitor” leases, and if any “significant” impacts occur, it will close the leases.

For example, when trying to justify haying, the agency suggests removing vegetation “may” invigorate plant cover. However, the MDFWP fails to note that plant vigor is less critical than hiding cover for most ground-nesting birds like pheasant and grouse. Not to mention native herbivores like elk and deer, not to mention prairie dogs, ground squirrels, grasshoppers and so forth are capable of reinvigorating vegetation as well. 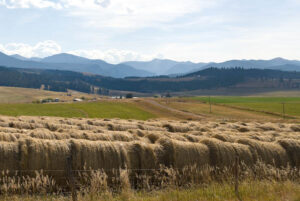 In essence, haying takes the food right out of the mouth of native herbivores and puts it into privately owned livestock. Photo George Wuerthner

Furthermore, while the agency does note that because of haying ‐ “Wildlife cover and winter forage would be reduced in areas leased in the fall for haying and grazing,” it minimizes this by suggesting it will be “short term.”

It drags out the old song that “livestock hoof action” will improve soils but in other places admits that hoof action can compact soils but fails to acknowledge that compaction intensifies drought conditions by increasing run-off from any rain. 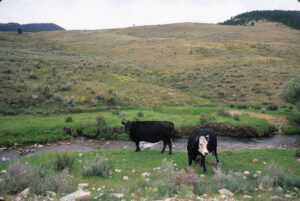 Likewise, the agency admits that “when livestock access water resources, water turbidity can increase at the site.” But it doesn’t explain why this occurs. Typically, this is due to the trampling of banks and vegetation loss along with riparian areas. Riparian areas are especially critical to a host of wildlife, from songbirds to insects. And nowhere does the agency mention the potential for water pollution from livestock manure. 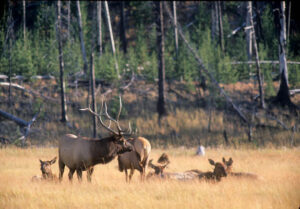 Elk in Yellowstone National Park and other livestock-free areas appear to do just fine without the presumed benefits of livestock grazing. Photo George Wuerthner

The agency suggests that grazing grasses will improve the habitat for ungulates like elk. This is surprising since elk in lands where livestock are excluded appear to do just well without the benefit of livestock grazing.

Of course, livestock can spread weeds, but never fear; the Dept. intends to put livestock in areas with minor weed infestation. Isn’t that reassuring? Allow livestock to infect new areas with weeds.

Similarly, the agency admits that haying operations could kill some birds, machinery can cause fires, spread weeds, and the loss of vegetation could harm recreation (i.e., hunting).

I suspect MDFWP would prefer not to open up these lands to “emergency haying and grazing” so they could use your support if you believe Wildlife Management Areas should be managed for wildlife, not private livestock.  You can contact MDFWP at

Written comments will be

9 Responses to Montana Fish, Wildlife and Parks Proposes to Sell Out Wildlife During Drought