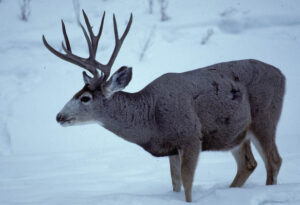 Recently the Wyoming Game and Fish reported that between 2016 and 2020, Chronic Wasting Disease (CWD) was found in over 60% of the mule deer tested in Central Wyoming. Recent testing suggests it may be as high as 78% of all deer evaluated. A map shows the occurrence of the disease in Wyoming.

CWD is a fatal disease that can affect all members of the cervid family, including deer, elk, and moose.

There is a similar prion disease that infects humans, called Cruetzfeldt-Jakob disease. It is also fatal. These prion diseases cause neurological tissue and systems degeneration, so the brain has holes appearing like a sponge, among other fatal problems.

An experiment led by the Canadian Food Inspection Agency resulted in the transmission of CWD from cervid (moose, deer, and elk) meat to macaques monkeys. The monkeys were infected by an injection into the brain, and CWD-infected muscle was fed to the animals.

This potential risk to human health has led to cautionary messages from Fish and Game Departments not to eat any infected animals. CWD has been found in 26 states and 3 Canadian provinces, including the Rocky Mountain States of Montana, Wyoming, Colorado, and recently Idaho. 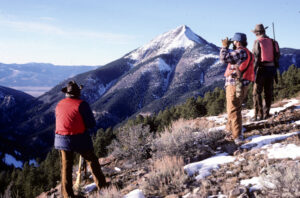 Hunters are cautioned about ingesting or even contacting infected animals’ blood and other fluids. Photo George Wuerthner

There is also evidence that transmission could happen from just contact with the blood or fluids of an infected animal, which means, at the very least, hunters must wear gloves while butchering any animal.

CWD has a long latency period like the closely related Mad Cow Disease. In other words, long before a deer or elk appears sick, it may have the disease. Unfortunately, that means there is no way for a hunter to know if the creature they shot has the disease until the animal is tested. 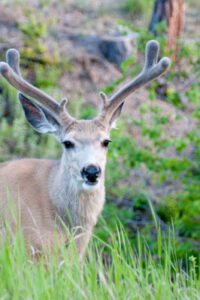 One piece of evidence of the prevalence of the disease in a population is there are few “old” animals. In highly infected deer herds, few animals survive past 4-5 years before succumbing to the disease. As a result, in some states, a control mechanism has increased the hunting of all deer.

Most hunters appear willing to kill and often consume potentially infected animals despite these warnings.

Although CWD is transmitted from animal to animal, the prevailing thought is that prions remain in the soil or on plants consumed by healthy animals, who then get the disease. Crowded herds are more susceptible to infection. 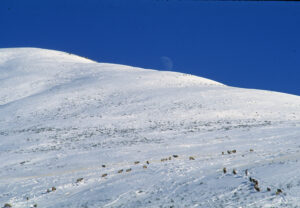 This brings up the problem in Wyoming, where the state operates 22 elk feeding stations to provide winter forage. Under such concentrated feeding operations, it is suspected that disease transmission is facilitated. For this reason, conservationists have attempted to close down feedgrounds, especially on national forest lands.

Despite the danger of CWD to Wyoming’s deer and elk herds, the state has resisted dismantling feed grounds. The reasons are much like the opposition to mask-wearing and vaccines to reduce the spread of Covid.

Many in Wyoming feel the threat of CWD transmission to humans is negligible. Also, many outfitters and hunters want the state to maintain high elk numbers for obvious reasons. While ranchers feel the feedgrounds help keep elk from moving on to private lands in winter.

Fish and Game agencies tend to downplay the risk of CWD transmission to humans since most of their income is derived from the sale of hunter licenses and tags. 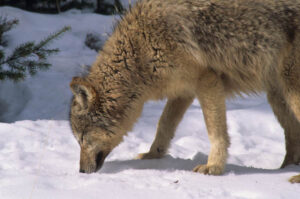 This brings me to wolves. Wolves can detect a sick deer or elk long before it is evident to human hunters. Some modeling suggests wolves could reduce CWD to nearly undetectable levels.

Yet Wyoming, like Idaho and Montana, has embarked on a wolf killing program that could effectively reduce wolf numbers to the point where they provide no control on the spread of CWD.

In essence, wolves are like masks and vaccines for Covid spread. They won’t eliminate CWD, but they could help control its spread. Like Covid vaccines, the goal isn’t to eradicate CWD but reduce its incidence to the point where few deer, elk, or other wildlife are infected. Wolves may be the “vaccine” needed to limit CWD.

Not surprisingly, Wyoming is also a state whose human population largely rejects mask-wearing, and many are opposed to vaccines. As a result, Wyoming is dead last in the percentage of its population that has received Covid vaccinations. Only 47% of Wyoming residents are vaccinated compared to Vermont, where 77% have been vaccinated.

Despite good evidence that wolves could help protect Wyoming’s game populations, there is resistance to science and a suspicion of a government authority. 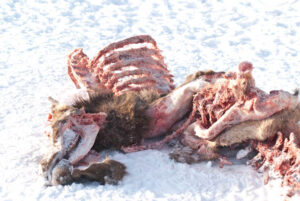 Carcass of elk killed by wolves. CWD can dramatically reduce prey and thus other animals, including wolves and scavengers that relied on wolf kills. Photo George Wuerthner

The long-term implications of CWD on the evolutionary trajectory of herd populations and age structure are yet unknown. For instance, in uninfected populations, the oldest and most mature males do the majority of breeding, and often older females hold the “cultural” knowledge about migration routes, calving grounds, and winter ranges. However, in CWD herds with a high incidence of infection, there are few “old” individuals.

The implications of CWD-induced population declines of deer and elk for other wildlife, including predators like wolves, cougar, and bears, much fewer scavengers is also a consideration. If there were a significant reduction in elk and deer herds, the ability to support these animals would be at risk.

Colorado has had the most prolonged documented evidence of CWD infections, and some herds sustain more than a 20% infection rate. But, thus far, it has not led to the wholesale collapse of Colorado’s ungulate populations. 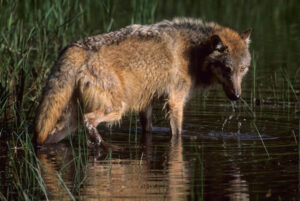 Rather than slaughter wolves, states should be promoting wolves as a natural and effective agent that can reduce CWD occurrence in ungulate populations. Photo George Wuerthner

Nevertheless, promoting wolves instead of slaughtering them might be the best antidote to CWD spread. But like vaccines and mask-wearing, misinformation and prejudice may ultimately lead to the loss of hunting opportunities as well as the decline in wildlife populations.

34 Responses to Of Wolves, Chronic Wasting Disease and Covid