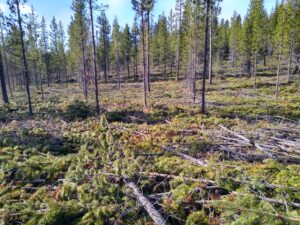 One of the arguments alleged by proponents of thinning or logging forests is that it will reduce the size of wildfires and hence carbon emissions from blazes. Proponents argue that more trees survive a fire if there has been “active forest management.”

The problem with such ebullient pronouncements is that they fail to provide a full accounting of the carbon losses and emissions.

A number of studies that reviewed carbon emissions conclude that logging and wood processing emits far more carbon than a fire. 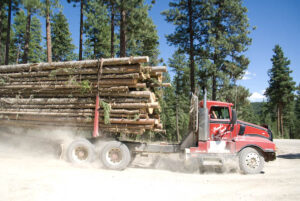 Logging operation on the Lolo National Forest is removing carbon from the forest which may take up to a 100 years to replace. Photo George Wuerthner

For instance, one study estimates that logging in the United States releases five times the carbon as wildfire, bark beetles, wind thrown, land use conservations, and drought combined.

Another Oregon study calculates that 35% of the carbon emissions in the state results from the wood products sector, while wildfires average approximately 4%. 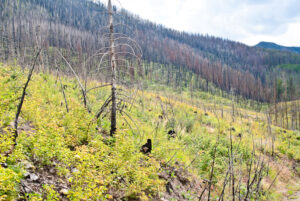 The probability that any thinned or logged area will encounter a fire is less than 1-2%.  Custer Gallatin National Forest, Montana, Photo George Wuerthner

Making matters worse is that logging advocates fail to consider that in thinning the forest, you are killing trees. The problem is that where and when a fire will occur is unpredictable. The majority of all thinned acres never encounter a fire. Some estimates suggest less than 1-2% of all thinned acres experience a fire when they might potentially influence fire behavior and tree mortality. 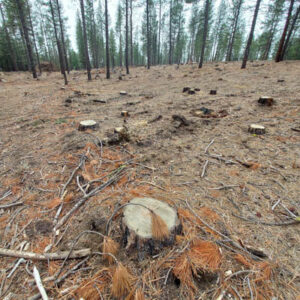 Sanitized thinned site on the Deschutes National Forest has removed most of the carbon (and wildlife habitat) which is subsequently emitted as Greenhouse Gases into the atmosphere. Photo George Wuerthner

As one group of researchers concluded: ““Thinning forests to reduce potential carbon losses due to wildfire is in direct conflict with carbon sequestration goals.” They go on to conclude “the amount of carbon removed to change fire behavior is often far larger than that saved by changing fire behavior, and more area has to be harvested than will ultimately burn over the period of effectiveness of the thinning treatment.”

In fact, one estimate suggests that it may take 100 years to replace the carbon loss through forest management. 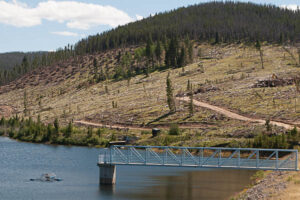 A thinning project near Chessman Reservoir on the Helena Lewis and Clark National Forest has removed the majority of the carbon. Photo George Wuerthner

Let us say 50% of the trees are removed in a thinning project, that is 50% of the stored carbon. So even if a thinned stand burns at lower severity and most trees survive a fire, the net result is still a significant loss of carbon due to tree removal because of the logging.

Plus, in logging the trees (killing them), you reduce the future carbon storage that would have otherwise occurred had the trees remained in the forest. 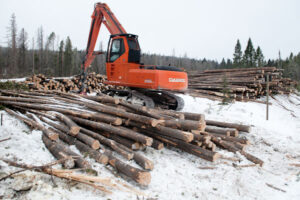 Logging on the Helena Lewis and Clark National Forest guarantees the loss of carbon and contributes to climate warming. Photo George Wuerthner

So, we get a guaranteed removal of carbon and carbon emissions with logging that contributes to climate warming, which is, in turn, contributing to more fires. 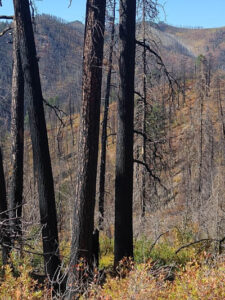 Even where a significant number of trees are killed, most of the carbon remains on the site as snags, roots, and charcoal. Hermosa Creek Wilderness, San Juan National Forest, Colorado.  Photo George Wuerthner

Even if a forest stand burns in a high severity fire where the majority of trees are killed, most of the carbon remains on the site as snags, branches, charcoal, and roots in the soil. 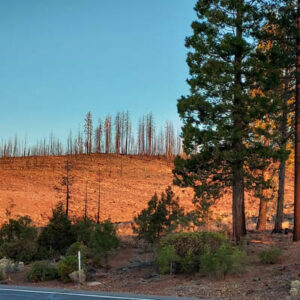 Even clearcutting did nothing to stop or change the behavior of the 2021 Dixie Fire which charred over 900,000 acres in California. Photo George Wuerthner

A further problem is an assumption that logging the forest will preclude large high severity blazes (where most trees are killed). However, there is abundant scientific and anecdotal evidence that logging does little to prevent large wildfires.

The best management for our forests and climate is to stop logging our public forests. 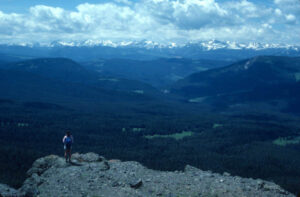 Hiker views the Porcupine Buffalohorn area of the Gallatin Range which would receive permanent protection as wilderness, and thus retain carbon in the forest if the Northern Rockies Ecosystem Protection Act were enacted. Photo George Wuerthner