The Big Lie: Yellowstone and Indians

One of the big lies perpetuated by new revisionists in the WOKE movement (AKA David Treuer’s piece in Atlantic as an example), which continues to be repeated over and over without any effort by any “so-called” conservation groups to correct is the notion that Indians were “driven” from Yellowstone to create the park.

First, there was virtually no use of Yellowstone by any Indian people other than for periodic raiding and hunting parties. No one “lived” in what is now Yellowstone Park, though obviously, tribes did live in the region, typically at lower elevations. 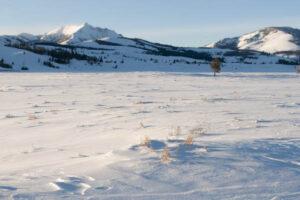 Yellowstone is buried under many feet of snow much of the year. it is not a place where humans would choose to reside. Photo George Wuerthner

The reason is evident to anyone who has spent any time in the area (which most revisionists have not). The Yellowstone Plateau is a high average elevation of 8000 feet and is covered with snow much of the year. In the 1800s, the climate was colder and snowier (Little Ice Age), and no doubt, snow depths in what is now Yellowstone were even greater than today. People always traveled through what is now Yellowstone, but few spent much time in what is now the park because of its high mountainous terrain.

People resided in the valleys where communities like Livingston exist today which were snow-free and where grass was available for their large horse herds. Photo George Wuerthner

Yellowstone was not a place for human habitation, especially since before extensive white settlement of the lower elevations, plenty of snow-free terrain was available with lots of wildlife that was more suitable for people. People live in the same locations today. Where would you live if you had the choice between living in, say, Cody, Livingston, or Billings vs. 8000 feet under snow? This was particularly important once tribes obtained horses since having enough feed for thousands of animals became a critical consideration. 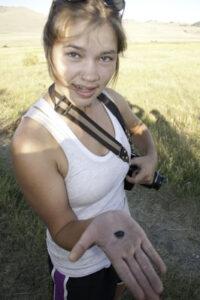 People sought out obsidian in Yellowstone for thousands of years for arrowheads, knives, and stone axes, until they could obtain metal replacements from traders. Photo George Wuerthner

People used to come to the area to obtain obsidian (which is also available in many other locations in the region). However, by the mid-1800s, nearly all arrow points, knives, etc., were made of metal obtained by trading.

The Bannock, Shoshone, and other tribes that lived west of the Continental Divide occasionally traveled through what is now Yellowstone on the “Bannock Trail” on their hunting treks to avoid the aggressive Blackfeet. However, Blackfeet raiding parties regularly patrolled the region, including the Three Forks of the Missouri, Gallatin Valley, etc. 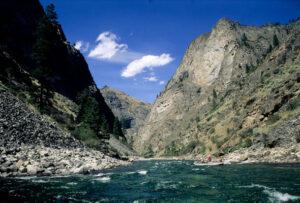 The Sheepeater sub-set of the Shoshone tribe so-called because they hunted bighorn sheep in mountainous area of Idaho and Wyoming resided in remote mountain valleys like the Salmon River Country of Idaho as well as other ruggest areas in the Greater Yellowstone region. But even they spent much of the year at lower elevations to avoid snow and cold temperatures. Photo George Wuerthner

The only tribe that regularly hunted and lived  in Yellowstone and surrounding mountains were the Sheepeaters.  They resided at lower elevations on the fringes of Yellowstone and throughout the mountains of Idaho, Wyoming, and Montana.  In summer months they sought out higher elevations to hunt bighorn sheep–hence their name.

Some suggest that they sought out remote mountain valleys like the Salmon River, etc., to avoid conflicts with more aggressive horse-mounted tribes. 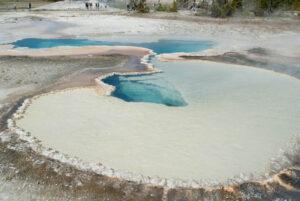 Be that as it may, by 1868, all tribes in the region, if not sooner, were assigned to reservations. The purpose of the reservation system was to open up the West to settlement, not to protect natural features. It would have been absurd for anyone in 1872 to suggest you needed to protect “wilderness” or even wildlife. The entire West was still broadly “wilderness.” Yellowstone was established to preserve unique geological features (geysers, etc.).

And even the Sheepeaters by the late 1860s or early 1870s went to the Wind River or Fort Hall or Lemhi reservations where other Shoshone-speaking people lived.  Indians continued to hunt in Yellowstone  until the 1880s or slightly later, in particular, as game animals like elk and deer were largely extirpated from other lands outside the protective confines if the park. Hunting was prohibited for all people, not just Indians in an effort to protect lingering elk herds. Yellowstone eventually was the source of elk that were transplanted throughout the West including in Banff NP in Canada, areas in Colorado, Arizona and elsewhere.

Another point to consider when you hear the new “history” of Yellowstone about Indians being driven from the park is that there was no “Army” or other official agents to “drive” Indians away.

Superintendent Norris took over in 1877. His son also helped him, as well as an occasional one or two other men, however, he was the only full-time employee until 1882.

It would be a truly amazing feat if a single person working part-time were able to “drive Indians” from the park. 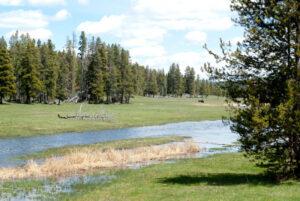 Nez Perce Creek in Yellowstone is named for the Idaho tribe that sought to evade military pursuit by crossing the park in 1877 seeking refuge in Canada. Photo George Wuerthner

As for military expeditions, other than the Nez Perce War in 1877,  and Bannock War of 1878, where the US Army pursed into Yellowstone Park what was perceived to be “hostile”Indians who had killed  settlers and fled their reservations, there were no US Army incurrsions into the park to “remove” Indians.  The Hayden Expedition in 1872, a few following expeditions had a few soldiers escorts to support them, but these expeditions did not go there to “drive” Indians away. Instead, they were scientific explorations.

Prior to the creation of the National Park Service in 1916, the US Army was given the job of managing national parks, and in 1886 soldiers were statiioned in Yellowstone to control poarching of wildlife,  particularly the last wild bison, and to construct roads.

Finally, I spent three days once at the Montana Historical Society headquarters in Helena, reviewing microfilm newspaper accounts from the period of 1870-1874 to see if there had been any military in Yellowstone. Again, I could not find a single reference. The papers noted such important events as chickens being killed by dogs, but nothing about Indians being routed from Yellowstone. Undoubtedly if the military had entered Yellowstone to “drive” the Indians away, it would have made the local papers.

There is no doubt that Indian people were often treated brutally and unfairly by the dominant culture. But parks were not part of the effort to settle Indian people on reservations. The creation of reservations and the establishment of Yellowstone occurred at nearly the same time, but the two events are unrelated.

The social justice revisionists continue to perpetuate the Big Lie because they want to discredit conservation ideas like parks and other preserves which are viewed as “colonial” or the result of white male science. There is an effort under various guises like “land back” and other movements to transfer public lands to tribal people.

However, if you are interested in preserving ecological function, biodiversity, and even storing carbon, parks and wilderness reserves are the foundation and have been proven to be the best way to protect these values.

Part of this effort to discredit conservation is designed to create the legal and ethical justification for the transfer of public lands to tribal people.

The social justice movement fails to recognize that places like Yellowstone have been a successful model for protecting the “others” –the real of life on the planet. Real social justice should include more than people. Parks are among our most democratic institutions since they are open to all people regardless of race, ethnicity, and wealth (though minority groups are under represented among visitors to many park areas).

Furthermore, without going into much detail, most tribal people were highly mobile, and the territory occupied by any group was in continuous flux until their movement was frozen by creation of reservations. Just who or which tribes should be given control of any public lands can be debated. For instance, the Blackfeet who reside on a reservation by Glacier NP drove the Flathead tribe across the Continental Divide into western Montana. Should the Flathead have control of Glacier or should it be the Blackfeet? 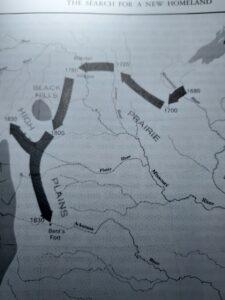 Map showing the movement of the Cheyenne people from Wisconsin in 1600s to Big Horn Basin, Wyoming in 1830s. The mobility and recent coloniations of the Yellowstone region by the Cheyenne is matched by all other associated tribes.

Nearly all Indians that roam the plains and mountains near Yellowstone are recent colonists of the region. The Cheyenne lived in Wisconsin in 1600s and gradually moved west arriving in the Big Horn Basin around the 1830s.  The Shoshone  spread through the Great Basin from south in Mexico, eventually occupying Idaho and Wyoming with an off shoot that went south to become the Comanche.  These movements took place over centuries.

Why focus on parks which for the most part were not the places that tribal people resided. Why not co-management of Denver, Seattle, Chicago or San Francisco? These lands were always the best places for native people to live, and occupy. If you want to “restore” ancient tribal lands, give co-management or transfer of these lands.

Yellowstone is still America’s best idea and should be celebrated and venerated as a global model of how to protect landscape function and biodiversity.

91 Responses to The Big Lie: Yellowstone and Indians