A Proposal To Create A Civilization Area System Escudilla Revisited, Aldo Leopold-Restoring the Grizzly to the Southwest

Mosquitoes And Wildfires–How To Live With Both 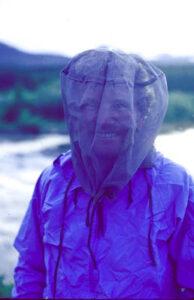 Our approach to mosquitoes and wildfires has much in common. Both are typically maligned, and most humans wouldn’t care if they were all eliminated or suppressed. Yet both are essential components of the ecosystem. What we need is a more ecological strategy to co-exist with them.

I’ve lived with mosquitoes for decades, sometimes in almost unbelievable numbers. Though I have occasionally encountered hordes of mosquitoes in the lower 48 states—the Everglades, for instance—nothing matches the blizzard of bugs I’ve encountered in the Far North. 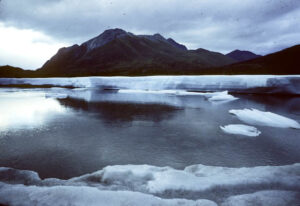 I can recall one backpack trip I made across the Brooks Range in Alaska. The mosquitoes were so thick that my pants, arms, and the rest of my clothes were covered so much that I could grab a handful of the churning mass of winged tormentors from my leg or arm and make a snowball from their bodies.

Even though I wore a sweatshirt with a hood, gloves on my hands, long wool pants, and a handkerchief across my face to fend off the biting insects, the nearly continuous s sound of their whining noise nearly drove me insane. At one point, I let out a shriek and sprinted about 25 feet. Then, I had a respite from the constant buzz for a moment.

But when I looked back to where I had been standing, I could almost see the outline of my body in a swirling mass of mosquitoes. Then the group coalesced into a gray beach ball size formation and came straight toward me.

The only peace I got was inside my tent, which I had to set up to eat even a snack. Otherwise, I had too many insects flying into my mouth. 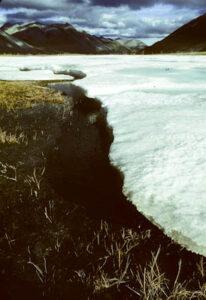 I wind up mostly hiking at night (mid-night sun) and select a route on the long patches of aufeis on rivers. These chunks of ice result when spring water bursts up through the ice-covered rivers to refreeze on the surface. Sometimes these blocks of ice can be miles long and ten feet thick. The cooler air temperature above the ice dampened the mosquito’s enthusiasm for flying. 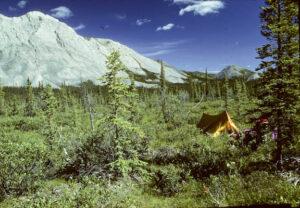 I tended to nap at midday. I’d dive into my tent. Then I spent a half-hour swatting and killing the several dozen mosquitoes which managed to join me in my abode before I could drift off to sleep.

Of course, mosquitoes are also vectors for malaria and yellow fever.

So you would think that I would support any efforts to reduce or eliminate mosquitoes.

Mosquitoes play numerous critical roles in the ecosystem. In the Arctic, they are among the primary pollinators of flowers. They are a food source for multiple birds, bats, amphibians, and reptiles. Since they lay eggs in water pools, where the larvae develop into flying insects but die all over the landscape, they are essential for nutrient transport of nitrogen and other elements for plant growth. And due to their swarming habit, they influence the movement of wildlife. For instance, caribou tend to seek out windswept ridges for feeding to avoid biting insects. Humans, in the past, behaved the same way, selecting open points and ridgelines for campsites.

In short, mosquitoes are critical to healthy ecosystems. And it is impossible to eliminate them from the land, nor would I suggest this strategy even if this was possible. 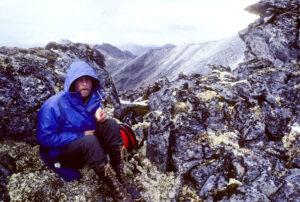 Me covered up with clothing as mosquito protection along the Iniakuk River Gates of the Arctic NP, Brooks Range, Alaska. Photo George Wuerthner

I feel the way to deal with mosquitoes is to work from the body outwards. So, as in Alaska, I wear clothing that protects my body from mosquito bites. In mosquito-prone areas of the country, I had a screened porch when I lived in Vermont. My tent has a mosquito screen. And sometimes, I have to wear a mosquito net over my face though I hate how it limits my vision ability. I camp in places where the wind can provide some relief from biting insects. 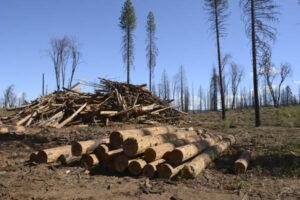 Similarly, wildfires are critical to healthy ecosystems. Just as with mosquitoes, wildfires can be both annoying and even deadly. But wildfire plays an essential role in ecosystem health. In most cases, fires reset the ecological landscape, favoring early successional species. At the same time, fires create the snags and fallen logs habitat used by many wildlife species. At least 45% of the birds in the northern Rockies depend on the snags that result from high severity fires. And the majority of fish habitat in smaller streams comes from logs that fall into streams, many of them resulting from wildfire. Wildfires often create a mosaic of age classes and species diversity, making resilience in forested stands. In short, wildfires play a crucial role in maintaining ecosystem health. 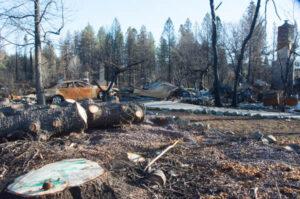 Aftermath of the Camp Fire. The way to save communities is to reduce the flammability of homes. Photo George Wuerthner

And like mosquitoes, the way to deal with wildfires is to start from the home and community and work outwards. Things like thinning, clearcutting and prescribed burns do not stop or even slow fires under extreme fire conditions. We are currently experiencing a west-wide drought that hasn’t occurred in 1200 years. None of the traditional solutions work under these circumstances. The way to adapt to this situation is to build fire resistance in our communities. 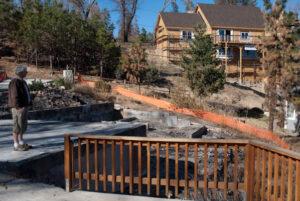 This home burned down while other homes survived the Grass Valley Fire in the San Bernardino Mts. CA. Reducing the ignitionability of homes by working from the structure outward is the key to living with fire. Photo George Wuerthner

We do this by installing fire-resistant roofs and thermal pane windows, reducing the flammability of landscaping adjacent to homes, and planning escape routes in a major blaze, among other strategies that help communities survive fires.

We cannot fireproof our forests any more than we can stop earthquakes or the tides. But we can learn to live with wildfire and have a reasonable chance of surviving the experience. We can’t predict where a fire will occur-so treating the forest to slow or stop fires to save communities is a huge waste of funds, not to mention it degrades the forest.  Instead of spending billions on logging the backcountry, we should spend that funding to help communities adapt if and when a blazes occurs on its doorstep.

5 Responses to Mosquitoes And Wildfires–How To Live With Both