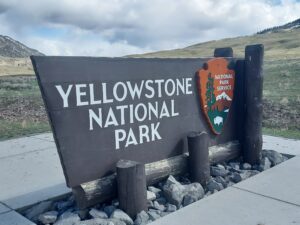 I spent the past week in Yellowstone National Park. I was grateful to the people who had the courage and foresight to establish Yellowstone in 1872. 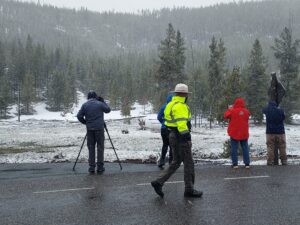 A ranger makes sure people give sufficient room for wildlife. Photo George Wuerthner

Standing alongside the road with a 100 other people watching, say, a bear rototilling up the ground in search of roots, voles, or perhaps truffles, I noted that every person was enthralled and excited to see a grizzly in its natural habitat. Yet, all of the folks stood at a respective distance from the bear.

When a park ranger came to ask people to move a dozen feet farther from the bear, he didn’t order them. Instead, he said politely, “could you please move a bit further away from the bear.” Unfortunately, such civility is seemingly rare today. 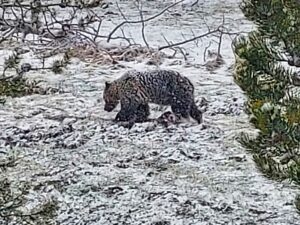 People with spotting scopes willingly shared views with others without such equipment. Knowledgeable folks helped people locate the animals. There was a sense of common purpose and shared experience.

But the other thing I observed that was also very heartening in this day of social divisions and identity politics was the way people just put aside labels.

Among those on the road’s margin, I could see several women with hijabs. I saw another family with a woman wearing a sari. There was a black couple from New York City who excitingly exclaimed to me this was the first bear they had ever seen. I talked to a family from Puerto Rico. And another couple from China, who, in broken English, told me that visiting Yellowstone was the high point of a trip to America. I heard other excited observations spoken in foreign languages.

There were, no doubt, Trump supporters and others who voted for Biden. There were hunters and anti-hunting folks standing side by side. There were wealthy elites with new sport utility vehicles, and others were driving old rusted, dented, and barely operable cars.

All of us were there to learn, appreciate, and enjoy watching wildlife. 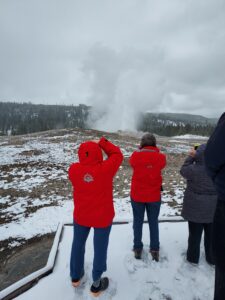 I have gratitude for the scenic beauty that parks preserve. I’m sure most of the people I saw were enthralled with the natural beauty of Yellowstone. We all need beauty in our lives.

There were no political, ethnic, or religious divisions among us at that moment. Is this not one of the great things about national parks? That we can all come together and enjoy the natural world and appreciate the value of our national park system? 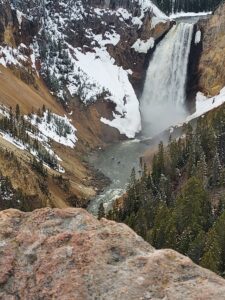 So it is with gratitude, that I visit Yellowstone and appreciate how the national park system helps bring America together. Today, there are few things that bind us as a nation with a common purpose. I am willing to bet if you asked every person watching the grizzly bear there whether they are glad we have a Yellowstone National Park, there would be universal approval.

You can visit national parks, but you must prioritize wildlife and natural systems in your behavior and interactions with the parks. If national parks do nothing more than teach people the value of restraint and the idea of a greater good, including for wildlife and plants which don’t have a voice, they will have done enough.

The original purpose of Yellowstone was to protect the more than 10,000 thermal features, the greatest collection of such geological wonders found anyplace on Earth. Photo George Wuerthner

And I hope that parks will continue to generate gratitude and a shared commitment to protecting nature for its own sake. For my part, I feel gratitude to those working to protect nature across the globe. Parks, though not perfect, still foster the best in people, which is why I work to promote gratitude in people for parks.

Our national parks includes consideration for what I call the “others”, or the living systems that sustains us all.

Where wolves have killed a bull elk. Parks are more than just a place for people to vacation. They are central to maintaining ecological function and systems. Photo George Wuerthner

I would put the creation of a national park system along side other American achievements including the Emancipation Proclamation,  public education, the Civil Rights Act, and other progressive policies. Like other goals such as equal rights, parks can be improved, but we should appreciate what they represent in a world where human desires are often put ahead of all other considerations.

And so, I have gratitude for parks because they represent restraint. They represent consideration of more than just people’s desires. They are an institution we should celebrate, not denigrate. What we need is more national parks, not less.

And if parks help to promotes gratitude in us, then all the better.

19 Responses to Gratitude for National Parks