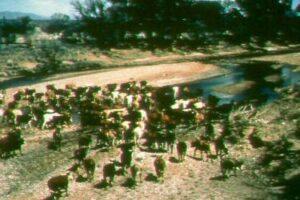 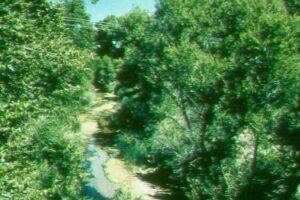 The San Pedro River from the same viewpoint. What the river looked like with livestock grazing, and about a decade after the livestock were removed.

The San Pedro River is a restored gem in southeast Arizona. The 47-mile-long San Pedro Riparian National Conservation Area (SPNCA) is one of the most intact riparian cottonwood gallery and mesquite bosque forests left in the Southwest. Riparian areas are the thin green line of water-dependent vegetation along western waterways. Though they make up only 1% of most western lands, they typically provide habitat for 70-80% of the wildlife in the West.

Since receiving designation as a riparian conservation area, it has responded exceptionally well to the removal of livestock and is now one of the best places in Arizona for birding and endangered or threatened wildlife and fish. 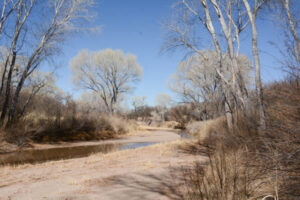 I have been following management issues at the San Pedro for decades. Here’s an article from 2004.

This success story was threatened by a Bureau of Land Management (BLM) proposal to expand livestock grazing in the San Pedro basin.

Fortunately, Western Watersheds Project, The Center Biodiversity, and Sierra Club filed a suit to challenge the BLM’s decision and were represented by Todd Tucci, an attorney for Advocates of the West. This week, a settlement was reached with the BLM to review the impacts of livestock along the San Pedro River.

It is important to note that these groups are among the few that consistently work to limit livestock impacts on our public lands, and they deserve your support.

In 2018 the BLM approved a Resource Management Plan for the area that expanded livestock grazing, among other problems. However, livestock grazing significantly impacts riparian areas across the West, so allowing any livestock use of the site would appear to be counter-productive.

The San Pedro River begins in Mexico and flows north towards Tucson. It is home to 400 species of birds and 80 mammals—one of the highest mammal diversity in the country. The threatened and endangered species in the SPNCA include Huachuca water umbel, southwestern willow flycatcher, desert pupfish, Gila topminnow, northern Mexican garter snake, yellow-billed cuckoo, and Arizona eryngo.

One of the problems for the National Conservation Area, which plagues many other public lands areas, is “trespass livestock.” Ranchers often graze their cows in areas where cattle are supposed to be excluded because they fail to maintain fences or, as some suspect, even purposefully ignore that their cows have wandered into areas closed to grazing.

The legal agreement filed in Tucson Federal Court requires the BLM to reconsider its plan to expand grazing leases in the conservation area and orders the BLM to determine if grazing is compatible with the goals of protecting riparian and wildlife values.

BLM will address existing and continuing BLM-managed grazing within SPRNCA, which occurs only on the Babocomari, Brunckow Hill, Three Brothers, and Lucky Hills Allotments, through the SPRNCA allotment lease planning process.

In addition, the BLM must be more proactive about capturing trespass livestock and enforcing grazing regulations.

One can hope that the BLM may finally fully protect this national treasure. Yet, amazingly, it has taken decades to force the BLM to protect the public’s property from private exploitation, which is essentially vandalism of public resources.