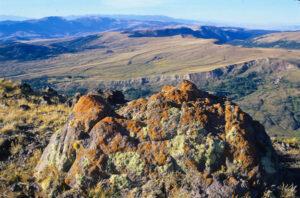 The 17,000-acre plus Greenhorn “Vegetation” Project in the Gravelly Range of the Beaverhead Deer Lodge National Forest (BDNF) is yet another destructive proposal designed to provide wood for the timber industry and fodder for the livestock industry.

Vegetation management is a euphemism for logging trees and burning sagebrush (to favor grasses for ranchers).

All these “vegetation treatments” will degrade the BDNF lands and harm the wildlife, including grizzly bears, bighorn sheep, elk, sage grouse and trout. The Greenhorn Project is nothing more than another subsidy to the timber and livestock industries. 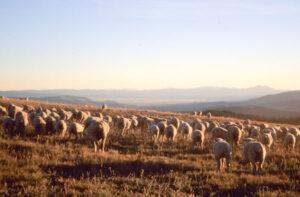 Domestic sheep grazing is a major impact on the ecological integrity of the Gravelly Range. Photo George Wuerthner

The BDNF says the forests within the project area are too dense due to fire “suppression” but admits the natural fire rotation is more than two hundred years. Thus, forest density is natural since we have not had successful (if at all) fire suppression for more than 50 years. 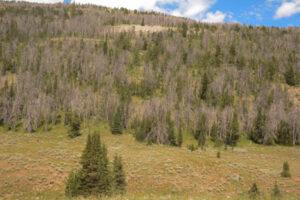 However, the Forest Service asserts that if this natural density of the forest is not logged, the forest will be die from heaven forbid natural mortality factors as drought, insects, or wildfire.

Nevertheless, we are told they must log (i.e., kill) trees with chainsaws to improve “forest health,” and “clean up the forest.” It brings forth an image of someone running around with a vacuum cleaner and dust mop, tidying up the mess that Nature has produced.

Using similar logic, perhaps we should shoot people over 50 who might die of a heart attack., cancer, and so forth. A reduction in the density of older people would definitely “improve” the health of our human population. 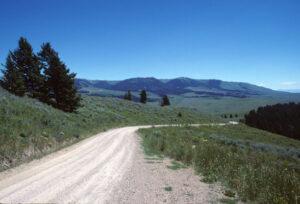 Gravlley Range forest stands have varying genetic resistant to bark beetles, drought, and even wildfire. A logger with a chain saw has no idea which trees have these genetic traits. Logging thus degrades the forest health. Photo George Wuerthner

Like people, some trees have greater genetic resistance to insects and drought and are better adapted to survive a wildfire. But we don’t know which trees possess such traits. Thus, in effect, the non-selective killing of trees degrades the forest’s health and decreases its ability to cope with changing climate.

The BDNF also asserts that thinning will reduce wildfire. But the science shows that opening up the forest canopy alters the micro-climate and dries fuels and permits greater wind penetration—both proven to increase fire spread.

One can’t predict where a fire, insect, or other sources of mortality will occur. With fires, for instance, the probability that any treated area will encounter a blaze is around 1-2% but we will suffer the damage resulting from “vegetation treatments” over 100% of the area.

The BDNF proposes burning over 3000 acres of sagebrush. Sagebrush has no adaptations to fire. Burning sagebrush in this day and age when we recognize how critical sagebrush ecosystems are for numerous wildlife species like sage grouse is legalized vandalism.

Worst for the planet, logging and wood processing release far more carbon than a wildfire. The snag forests left after a wildfire store lots of carbon in their boles, roots, and as charcoal in the soil. Even if insects, drought, or fire kill the trees, they remain standing storing carbon for decades.

By contrast, logging trees and wood processing releases far more carbon into the atmosphere. Plus when the Forest Service suggests they are “saving” the forest, they never count the trees they have killed with chain saws as a loss. Yet research suggests that when trees killed by logging are combined with any trees subsequently killed by wildfire or other causes, the overall loss is much greater than any natural factor alone. 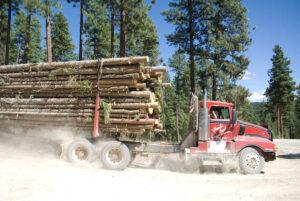 Logging removes carbon from the forest and releases it into the atmosphere contributing to climate warming. Photo George Wuerthner

The most significant source of GHG emissions in Oregon is the timber industry. It is even greater than all the cars, planes, and other transportation.

Part of the justification for the project is that 70% of the project area is the Wildlands Urban Interface (WUI). But like everything the Forest Service does to rationale logging, they distort the definition of interface. Fuel reductions more than 100 feet from a structure provide no additional safety. Meanwhile, the FS designates a WUI that is often a mile or more from any home so they can justify logging.

The way to protect homes is to avoid building them in fire-prone landscapes in the first place, and for those houses already in such location, reducing the flammability of the structure is by far the most effective treatment, not trying to fire-proof the forest.

Chainsaw medicine is the problem, not the cure.