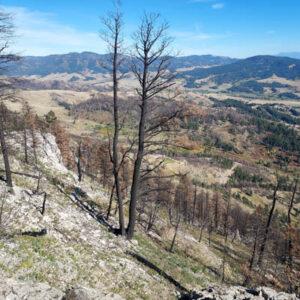 The Bridger Canyon Fire by Bozeman burned during a period of high winds and extreme drought. The resulting snag forest is considered by some to be an example of a “bad” fire. Photo George Wuerthner

I continuously read articles by journalists and others who expound on fire issues that promotes several inaccuracies. Here’s just one of many examples I could cite: “The US Forest Service Planned to Increase Burning to Prevent Wildfires. Will a Pause on Prescribed Fire Instead Bring More Delays?” 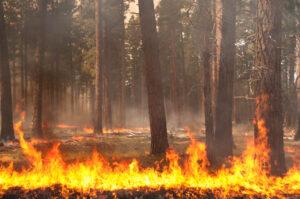 A prescribed burn or “good fire” consumes needles, grasses and small trees but does not kill the mature trees. Photo George Wuerthner

A good fire is defined as low severity blazes that consume grass and small trees but do not kill the large trees. The “good fires” reduce “fuels,” which are implied to be the significant factor driving large high-severity blazes.

We are told that Forest Service mismanagement by “fire suppression” has led to denser forests that are susceptible to drought, insects, disease, and wildfire. And, of course, the Forest Service’s response to this perceived problem is logging. Mortality from natural processes is “bad,” and the agency seeks to thwart natural sources of mortality by killing trees with chainsaw medicine.

Of course, there is no way to tell which trees may have a genetic resistance to drought, insects, or even wildfire. So chainsaw medicine decreases forest resilience and health. 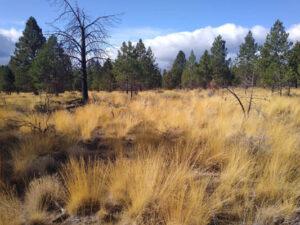 One of the problems with prescribed burning is the effect is short-lived. This site was burned two years before and the fire stimulated the growth of fine fuels like grass so that the area is now more flammable than prior to the treatment. Photo George Wuerthner

But the other favorite response is to promote more “good fire,” mainly practiced by Indian people.

If you asscribe to the good fire bad fire duality, you naturally promote burning or “cultural burning” by Indian people.

The problem with this scenario is that it doesn’t comport with the science of fire ecology, implicitly matches the Industrial Forestry Paradigm, and demonstrates the usual human arrogance.

For instance, the author says: People, particularly from Indigenous communities, have used controlled fire and cultural burning to manage land for thousands of years.”

This “Indians kept the forests healthy” paradigm implies that our forests were a mess without humans managing them. This raises the natural question how did the forest survive the millions of years before humans from Asia colonized North America? 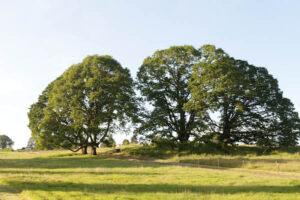 The Willamette Valley of Oregon had in pre-Columbian times had one of the highest densities of Indian people n the continent, yet researchers concluded that native burning was primarily local in nature and fires were mostly correlated with climate variation. Photo George Wuerthner

Furthermore, there is abundant research that questions the influence of Indian burning. Most researchers suggest that to the degree Indian burning had any effect, it was primarily local, not a landscape feature.

Regarding Indigenous ignitions in the Willamette Valley, Cathy Whitlock notes: “The idea that Native Americans burned from one end of the valley to the other is not supported by our data … Most fires seem to have been fairly localized, and broad changes in fire activity seem to track large-scale variations in climate” (Fire Science 2010). 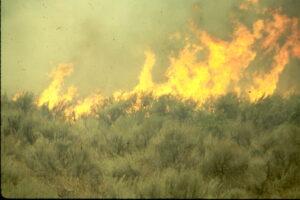 Many low elevation plant communities like sagebrush have no adaptation for frequent fire. If fires were as frequent as proponents of Indian burning suggest, we would not have large expanses of sagebrush. Photo George Wuerthner

We have evolutionary evidence for this in that many low-elevation plant communities like sagebrush and chaparral, to name just a few, have no adaptations to frequent fire.

If Indian burning were so widespread and routine as some advocates suggest, these plant communities would not exist or be very limited in extent. Still, the sagebrush steppe is one of the largest plant communities in the West. 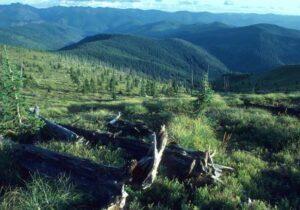 Snags in the Great Burn proposed wilderness left by the 1910 Big Burn that charred 3.5 million acres long before there was any effective fire suppression. Photo George Wuerthner

Beyond the hubris such a position implies, there is strong evidence that even with Indian cultural burning, there were always sizeable high-severity blazes. For instance, the 1910 Big Burn that charred 3.5 million acres of Idaho and Montana occurred long before “fire suppression” was initiated in the 1930s.

There is even the question of whether fire suppression was effective because, increasingly, scientists recognize that the main factor controlling large fires is climate/weather. Beginning in the late 1930s and continuing until the 1980s, the climate in the western United States was cool and moist. Indeed, glaciers were growing in the mountains of the Pacific NW during this period.

What happens to fires when it’s cool and moist? First, you get fewer ignitions; even if a fire starts, it is less likely to spread, giving the appearance that Forest Service fire suppression was successful. 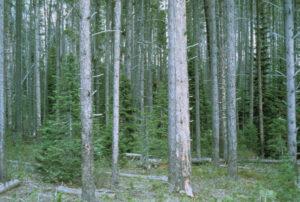 Betweeen 1972-1987 Yellowstone National Park permitted 235 fires to burn without suppression. Of these blazes, 222 burned less than a few acres, and all fires self extinquished. Then in 1988 more than a million acres burned in the park. Was there suddenly more fuel in 1988 than in 1987? The difference was that 1988 was the driest summer on record with periodic high winds.

Maybe a better explanation than fire suppression was successful is that climate made it easy to put out fires. Another consequence of cool, moist conditions is that tree seedlings have a higher survival rate-which means forests would naturally tend to become denser.

Most western ecosystems are characterized by long fire rotations of many decades or hundreds of years. Moreover, these fire regimes tend to burn irregularly at mid to high severity. So the idea that fire suppression has changed natural fire variability is greatly exaggerated.

The other problem with the good fire/bad fire scenario is that high-severity blazes and the resultant snag forests are critical to healthy ecosystems. There is plenty of research to show that after a high-severity blaze, you have more wildflowers, more bees, more small mammals, more mushrooms, more birds, more fish in the streams, and even more large mammals like elk and moose. In other words, from the perspective of the ecosystem, we need more large high severity fires. Unfortunately, low-severity “good fires” do not emulate large fires’ ecological benefits. 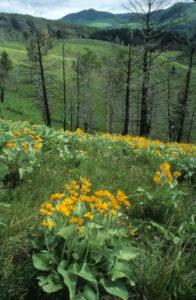 The snag forests that result from high severity blazes are among the ecologically important habitats found in the West. Photo George Wuerthner

The snag forests that result from “bad fires” also store a significant amount of carbon in boles and roots, while the new growth that comes in after a fire continues to pull even more carbon from the atmosphere. The net result is often more carbon storage than you might have with a “good fire” regime.

I’m all for more fire on the landscape. But we should be promoting large natural fires.

Nearly all the acreage burned annually occurs in a few large wildfires when climate/weather is favorable for fire spread which includes high winds, drought, high temperatrures and low humidity. So climate, not fuels, is driving these blazes. But doing anything about climate warming is politically difficult. So instead, we promote “feel good” proposals that give the impression that something is being done to counteract the growing number of large blazes when it doesn’t make any difference until we need the ultimate cause of significant fires-climate change.