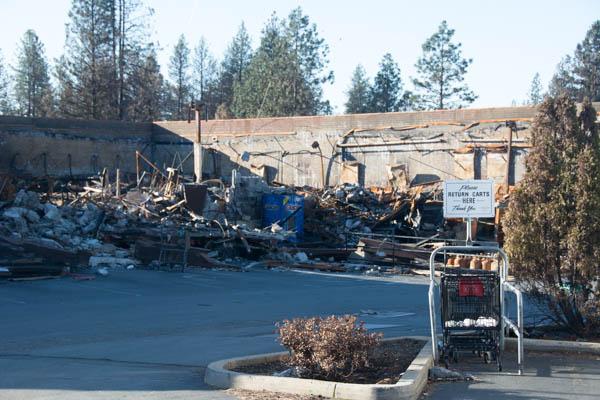 Even the extensive pavement (totally without fuel), extensive clearcutting, and hazardous fuel reductions on public lands did not save this Safeway Store when the Camp Fire burned through Paradise, California. Photo George Wuerthner

Recently Bend residents were treated to the wildfire documentary Elemental at the Tower Theater. The movie produced by Trip Jennings and Ralph Bloemer is a science-based film expose on wildfire ecology and policy.

The documentary’s central theme is that wildfires are primarily driven by climate/weather and that fuel treatments are ineffective in protecting communities. Home hardening, not logging, makes communities safe.

As Dr. Tim Ingalsbee of Fire Fighters United For Safety and Ethics (FUSE) says in the video, we need to change our entire paradigm toward wildfire. Instead of trying to suppress or prevent wildfires, we need to develop a new relationship with the blazes.

The film begins with terrifying videos of people evacuating from the Camp Fire that in 2018 overwhelmed Paradise, California. The fire, driven by high winds, devastated all firefighting efforts. The Camp Fire destroyed 19,000 structures and killed 87 people.

Even though clearcuts and hazardous fuel reductions surrounded the community and two previous wildfires that all “reduced fuels” none of these effectively stopped the blaze driven by 70-mile-per-hour winds. With only two roads in and out of the town, traffic jams developed as people abandoned cars that were on fire or had run out of gas.

The situation in Paradise could easily occur in Bend. With only six bridges across the Deschutes River, if residents in the West half of town were trying to evade a fast-moving fire, we could see a similar gridlock situation on our roads, with people running out of fuel and abandoning cars on bridges, blocking evacuation efforts.

Dr. Jack Cohen, who studied the intersection of fire and homes for the US Forest Service at the Missoula Fire Lab, was interviewed in the movie. Cohen’s research shows that fuel reductions more than 100 feet from a structure provide no additional protection.

In other words, the Forest Service policies of “fuel reductions” in the hinterland (as the Deschutes National Forest is doing) are a waste of money (since most timber sales lose money) and degrade forests by the removal of wood from the ecosystem.

For instance, one review study by Bradley et al. that looked at 1500 wildfires in dry ponderosa pine forests around the West found that the highest severity burns occurred in areas with “active forest management.” 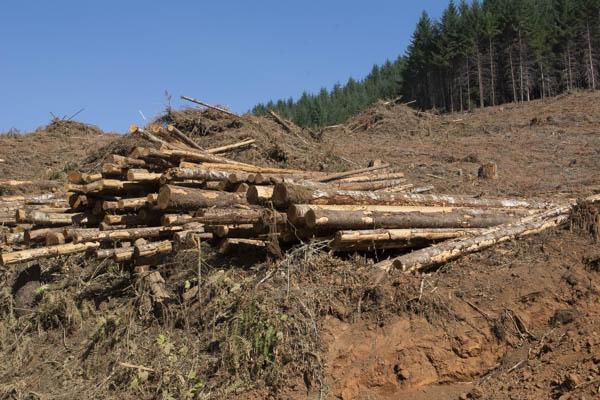 Logging is not benign. It removes carbon from the forest, sedimentation from logging roads fouls streams, and in many cases, logging enhances fire spread by drying out sites and increasing wind penetration. Photo George Wuerthner

This is important because logging/thinning is not benign. First, logging removes trees (wildlife habitat from the ecosystem). Logging roads are a significant source of sedimentation in streams and the spread of weeds. Finally, and surprisingly, despite numerous statements to the contrary, there is a great deal of scientific evidence that forest management enhances fire spread.

For example, the film showed mapping done by Los Padres Forest Watch, which showed the extensive logging within the Dixie Fire burn, California’s largest blaze in 2021 . Most of the area charred by the Dixie blaze had been heavily logged in the past. 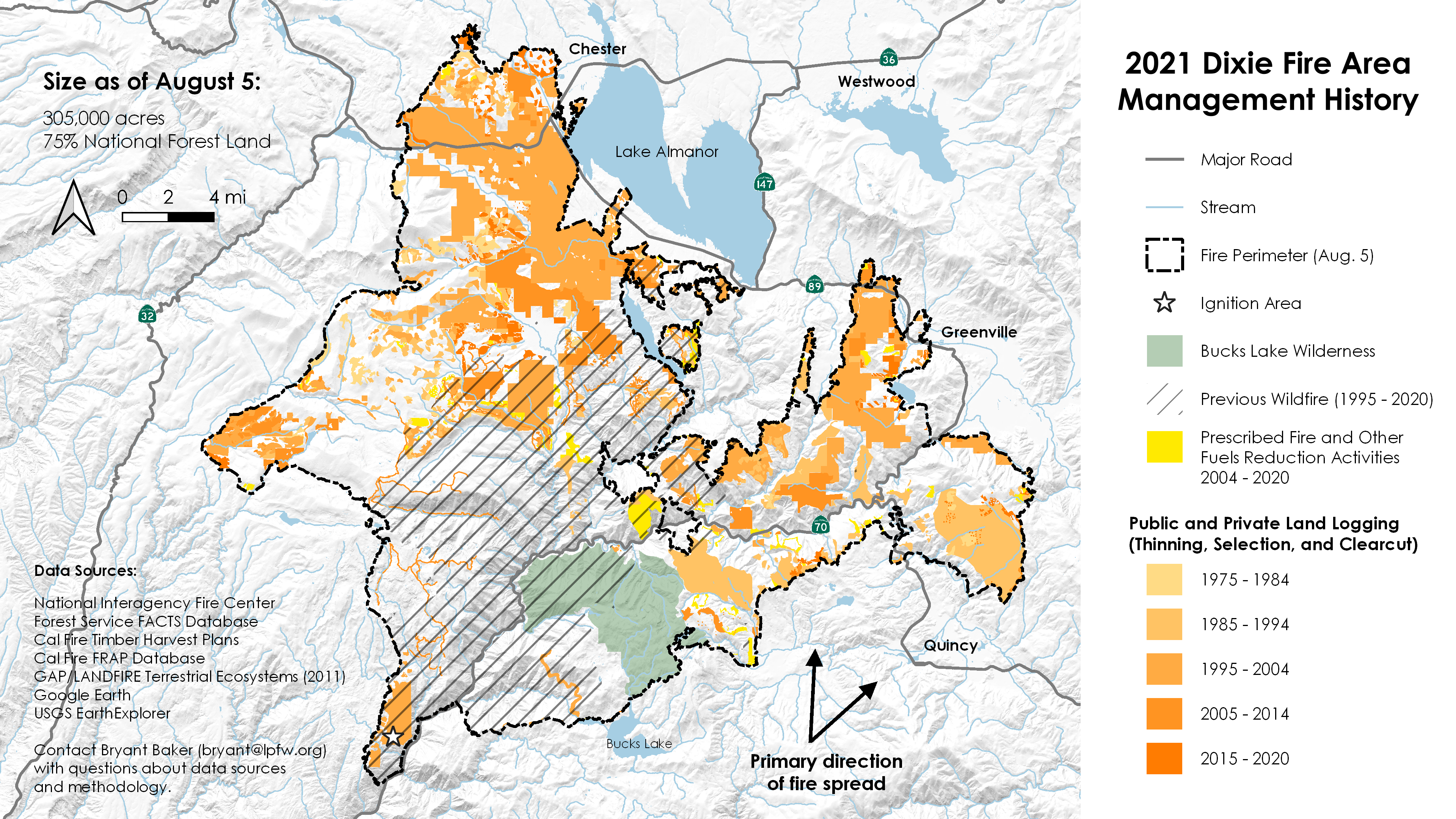 However, we don’t have to go to California to see how “fuel treatments” fail under extreme fire weather conditions. Dr. Chris Dunn at Oregon State University was also featured in the video. He looked at the Holiday Farm Fire, which burned through large sections of private Industrial timberland along the McKenzie River drainage during Labor Day fires in 2020. He found that 70–100-mile hour winds drove flames through clearcuts and thinned stands. Even if thinning and burning were effective at modifying wildfire under moderate conditions, they generally fail under extreme fire conditions.

Dr. Tania Schoennagel of the U of Colorado at Boulder has looked at the effectiveness of active forest management (i.e., logging and thinning) and found that less than the majority of all wildfires never encounter a fuel treatment at all. Less than 1% of medicines are burned, and most of the time, even these treatment areas, under extreme fire weather conditions, make no difference.

This questions whether vegetation treatments make sense since they can only be effective if a fire encounters them.

Another OSU researcher, Dr. Bev Law, was featured in the film. Law’s research deals with carbon emissions. Her research shows that older trees store more carbon than younger trees. But even more surprising, her studies showed that burned and dead trees continue to store carbon for decades and centuries. Thus, the Forest Service policy of “salvage” timber-cutting sales after a blaze removes this carbon and continues global warming. Logging (active forest management) is the single most significant contributor to Greenhouse Gas Emissions in Oregon.

Even the idea that we should be trying to limit high-severity wildfires is challenged in the film. Wildlife biologist Maya Khosla talked about how much life is maintained and enhanced in severely burned forests. From the abundance of wildflowers thus pollinators to cavity-nesting birds like black-backed woodpeckers, bluebirds to nuthatches utilize high-severity burn areas. 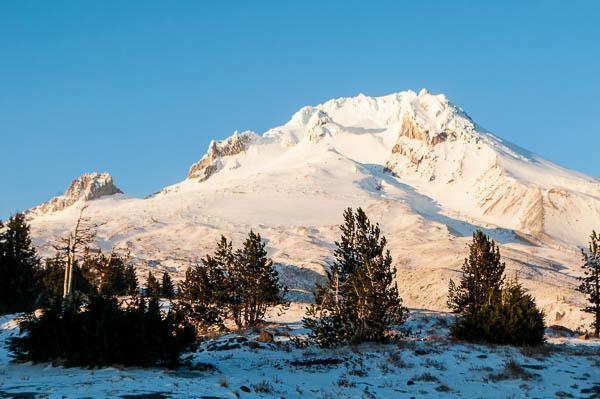 Another poignant point in the film is that the increase in a wildfire in the last part of the 1900s and early 2000 is primarily a result of climate change and no fuels. During the 1940s-1980s, the West was cooler and moister than before or since. Indeed, glaciers were growing on Mount Hood during this period, and some scientists predicted we were entering a new Ice Age.

Ironically this was the same time when “fire suppression” was deemed “successful,” But in truth, Nature was successful in suppressing fires, not humans. And once the climate changed toward drought, higher temperatures, and more wind, fires could race across the landscape. 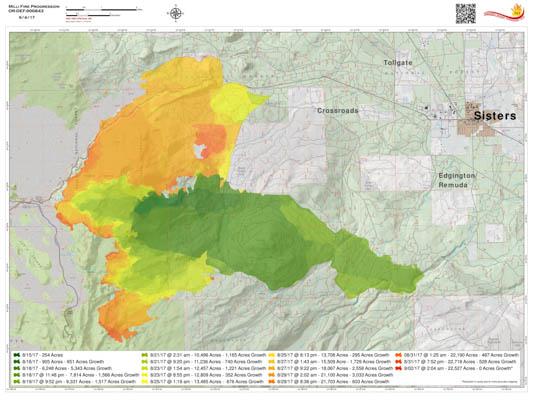 Milli Fire progression. The lighter colors are areas burned after the wind shifted directions pushing the fire back through previously burned and thinned areas and up into lava fields.

Anecdotal claims that active forest management is practical need to be scrutinized. For instance, proponents of logging in the Deschutes National Forest claim that thinning helped to save Sisters from the Milli Fire. But a careful reading of the daily fire progress reports shows that the wind changed directions and drove the fire away from Sisters and back on previously burned lands and up into Lava Fields. So, a change in the wind “saved” Sisters, not thinning.

The film’s take-home message is that climate/weather, not fuels, drive large wildfires. Just as we can’t prevent hurricanes or earthquakes, we can’t alter wildfire behavior under these extreme conditions.

As Jack Cohen said in the film, “wildfires are inevitable, but home destruction is not.” Instead of continuing to spend billions of dollars on forest management that degrades forest ecosystems, we should be spending far more preparing communities for surviving wildfires.

If the Elemental documentary comes to your community, it is worth viewing. Community and political leaders must see the film.