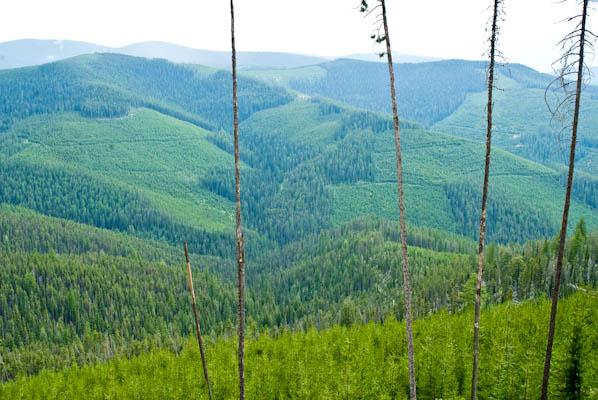 The Black Ram project area includes Northwest Yaak from the Canadian border west to the Idaho border, south to the ridge line between Pete Creek, and east to the Yaak River. The Yaak drainage is one of the most remote regions of Montana. 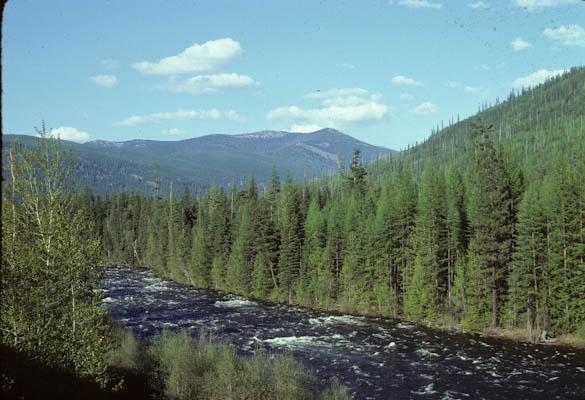 The Yaak drainage is one of the most remote and wild areas of Montana. Photo George Wuerthner

Note the use of the  euphemism treatment. The agency always sees the forest as sick and needing a healthy dose of chainsaw medicine. 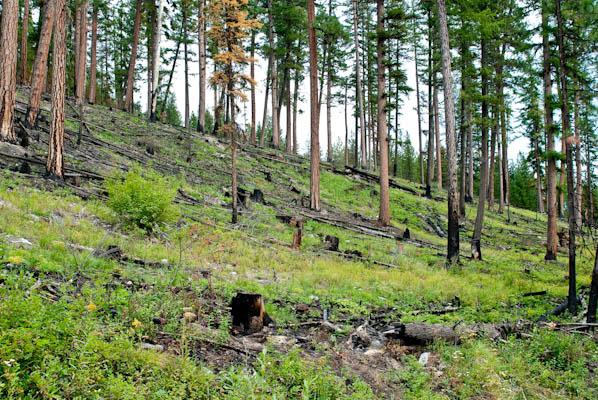 So let me get this straight. The agency claims if they don’t log the forest, trees “may” die from insects, disease, or fire. So the way to prevent this death is to kill the trees with chainsaws. Does anyone other than me see some disconnect in logic here? 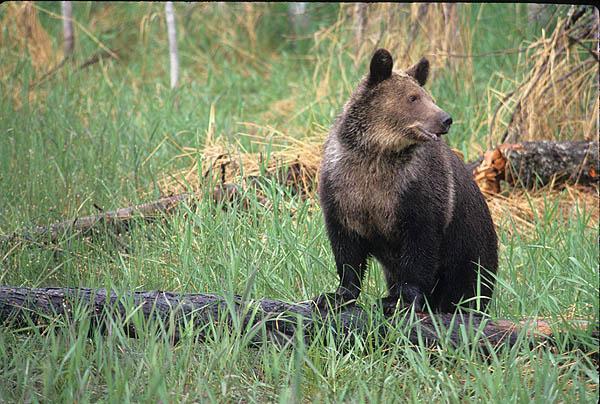 The grizzly bear population of the Yaak is one of the most endangered in the United States with no more than 20-30 bears according to some estimates. Photo George Wuerthner

Other rationales for Black Ram are just as ludicrous. The FS claims that the Black Ram timber sale will, among other justifications, aid grizzly bear recovery. The Cabinet Yaak grizzly population survival is one of the most tenuous in the country.

So the FS wants to apply chainsaw medicine to the grizzly habitat to increase, it claims, huckleberries. 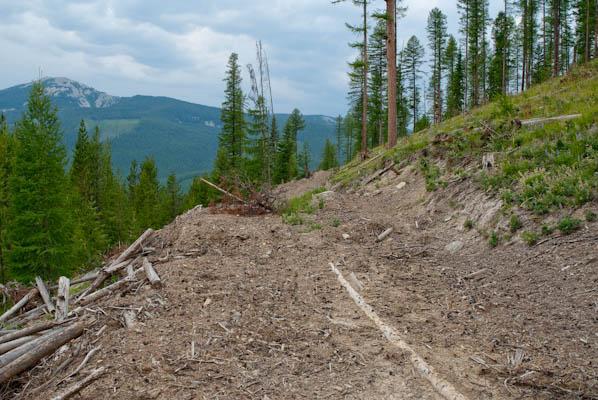 No doubt there may be more huckleberries, but huckleberries are not limiting grizzly bear recovery in the area. The main problem for bears is road access and the high human morality associated with them.

The Black Ram project will create nearly a hundred miles of open roads (90 miles of reconstructed roads and 5.5 of new roads). This roading is what will harm grizzlies as well as other wildlife like elk. What they all need more than anything is security cover. Chainsaw medicine provides none. 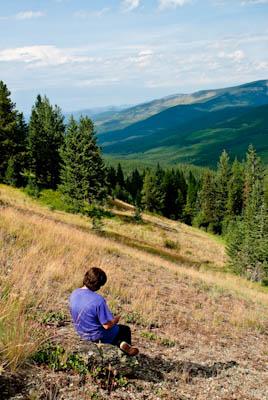 The Yaak Valley is already fragmented by past logging. Logging of the Black Ram area will further fragment the landscape and destroy the few remaining natural corridors.

The FS asserts that the Black Ram logging project will mitigate climate warming. Yet, logging and wood products production releases a tremendous amount of carbon. In Oregon, for instance, logging is the most significant source of Greenhouse Gas Emissions in the entire state—more than all the car, airplane, and truck emissions.

Cutting any old growth will reduce the carbon storage of the area. Research by Bev Law of Oregon State University has shown that large trees continue to store carbon throughout their lives. So logging the forest doesn’t help climate warming-it worsens it.

Even if trees die from beetles or fire, they remain on-site, storing carbon. Carbon is stored in the soil, snags, and wood.

The idea that logging the forest will somehow protect homes from wildfire is yet another myth perpetuated by the Forest Service and timber companies. What drives all large wildfires is climate and weather, not fuels. There is no need to remove fuels more than a hundred feet from home. And home hardening is far more effective at protecting homes than logging the forest.

Many researchers, including retired forest service researcher, Jack Cohen, suggest any fuel removal more than 100 feet from a structure provides no extra protection. 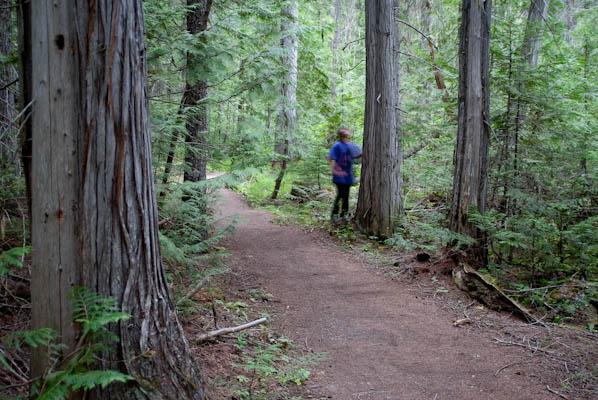 The Yaak Valley forests are a rare inland rainforest that tends to be represented by Pacific Northwest species that burn infrequently. Some of the larger tree species on the site include western red cedar, western hemlock, subalpine fir, Engelmann spruce, and western larch, characterized by long fire rotations between blazes. Some of the larch are estimated to be 600 years old.  The proposed logging will remove older trees resistant to wildfire and replace them with invasive weeds and small trees. It is these fine fuels that cause wildfires to spread rapidly.

They are a patch of classic old-growth forests with large-diameter trees, an abundance of down wood, and decomposing trees.

Dr. Dominick DellaSala, a leading authority on old-growth forests, conducted a field visit to the Black Ram logging project area.  He says, “I can say unequivocally that this site is old growth, is critically important to its surroundings, has key climate and refugia properties, including the potential for large amounts of above and below ground carbon to continue to accumulate over centuries.”  Additionally, the U.S. Forest Service “claims [Black Ram] is for climate resilience, while my observations show it would have the opposite effect.”

If you were to visit a doctor who prescribed the same treatment for everything from a broken leg to a heart attack, and nothing worked, would you trust them to treat you again and again? Yet this is precisely what the Forest Service is asking the public to accept. 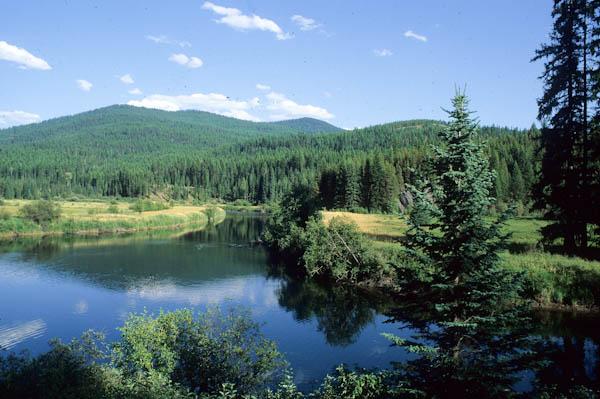 To add insult to injury, The Forest Service estimates taxpayers will lose $3.2 million subsidizing this deforestation.

A lawsuit brought on by the Alliance for the Wild Rockies put the project on hold in February 2020. After receiving a biological opinion from the U.S. Fish and Wildlife Service that deemed the Forest Service’s plan “was not likely to jeopardize the continued existence of the grizzly bear,” officials reopened the project for comment in September 2020.

The Black Ram project exemplifies the agency’s commitment to deforestation and ecosystem degradation. We should expect and need better policies from the agency.