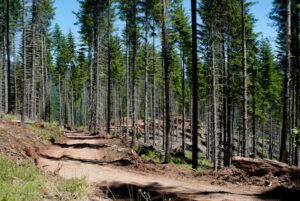 New road was created for a forest thinning project. Roads are a major location for human ignition. Photo George Wuerthner

The Biden administration announced it would spend nearly $930 million fighting wildfire in the West. While the plan includes money for everything from hardening homes to paying for more firefighters, the main thrust of the proposal is to increase thinning/logging and prescribed burning to “reduce” fuels.

It is part of a 10-year plan to “treat” 50 million acres, an area bigger than all of New England.

Many of these “active forest management” treatments require road access, thus either creating new roads or being used as an excuse to keep existing roads open and available for forestry management.

The elephant in the room is that roads are among the factors that contribute to greater human ignitions. Humans ignited four times as many large fires as lightning.

A review of 1.5 million fire records over 20 years found that human-caused fires were responsible for 84% of wildfires and 44% of the total area burned. 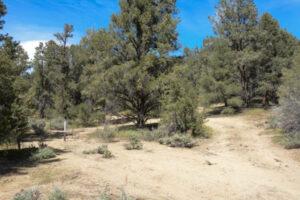 There is, however, a better way to spend funds. The majority of all wildfires are due to human ignitions that occur on or near roads. 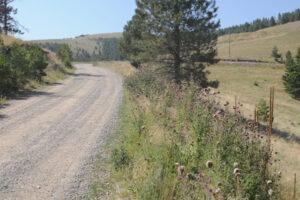 The disturbance caused by logging roads increase the invasion of weeds, many of them flammable. Photo George Wuerthner

Research has also demonstrated that roads act as corridors for the spread of flammable weeds. Roads also create a natural vector for wind and vegetation drying, enhancing fire spread.

While blazes that start in roadless areas tend to burn more acres, they pose a smaller threat to human communities. However, since roads are more likely to be closer to human habitation, the increased number of ignitions associated with roaded landscapes may be a greater threat to structures and human life.

The Forest Service has nearly 400,000 miles of roads—more than enough to circle the globe 16 times. 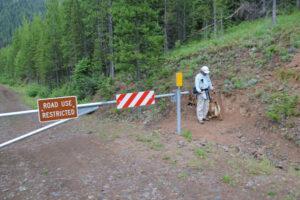 Even so-called “closed” roads provide increased human use and access to the landscape.  Adding a gate does little to reduce the negative influences of roads on fire spread, weed invasion, water pollution from sedimentaion, displacement of wildlife and other impacts. Photo George Wuerthner

These roads provide access for cars and pick-ups. However, even when they are closed to street vehicles, the roads still provide access for All Terrain Vehicles (ATVs) and even mountain bikes, allowing human penetration into landscapes and increasing fire ignitions.

A more effective strategy for reducing wildfire threats to communities would be to spend significant funding by decommissioning and fully recontouring former logging roads, including so-called temporary roads. Not only would road closure and restoration of roadbed slopes reduce unwanted ignitions, but they would have other benefits as well. 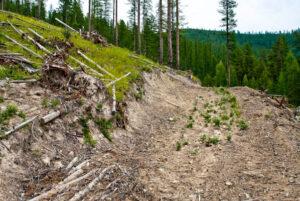 Road created for thinning projects like this one in Yaak drainage, Montana is a chronic source of sedimentation into stream, harming aquatic ecosystems. Photo George Wuerthner

Decommissioning and restoration of roads also have carbon storage benefits. Fuel reductions do nothing to change the climate, and since logging is a significant source of carbon emissions, it may even enhance wildfire spread in the future. 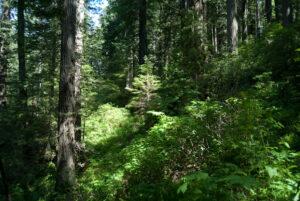 Do you see the road? Hopefully not. That’s the point. Here a logging road in Redwood National Park, California was recontoured and revegetated effectively reducing most negative influences of roads, including human access. Photo George Wuerthner

Shifting the emphasis of funding from more thinning/logging and prescribed fire towards reducing road densities may have greater benefits for reducing wildfire threats to communities, not to mention other resource values such as reduction in wildlife disturbance, soil erosion, aquatic ecosystem degradation, and even carbon losses.