Cliven Bundy Appeals Order to Remove Trespass Cattle or Face Seizure by BLM Do you have some interesting wildlife news? August 16, 2013 edition

The recently released Department of Interior Fiscal Year 2012 Economic Report shows that Grazing on BLM Public Lands Accounts for only 0.41% of the nation’s livestock receipts and only 17,000 jobs.  In contrast, recreation accounts for 372,000 jobs and contributes $45 billion to the economy.

According to the report, the BLM permits 12.4 million animal unit months (AUM’s) but only about 9 million AUM’s were billed in 2012 and the average during recent years is only about 8 million AUM’s.  An AUM is the unit of measure for livestock grazing and equates to forage needed to support one cow/calf pair or five ewe sheep and their lambs for one month.  The rate for an AUM in 2012 was $1.35 which, in terms of inflation, is lower than it has ever been.  As of 2011, the BLM has  about 18,700 active permits on more than 21,000 allotments across 155 million acres.

Direct economic output attributable to public land forage for FY 2012 was estimated to be approximately $808 million dollars – or about 1.6% of cattle and calves and sheep and lamb receipts in the 17 Western states.

The report goes on to rationalize the reason for the low rates as compared to private grazing lands where the market price was $16.80/AUM in 2011.  The lands are not as productive as private lands, private landlords may provide and maintain other amenities such as water developments of fences for the ranchers.  Unfortunately, even with the absurdly low rates, ranchers routinely ignore fence and water development maintenance.  On nearly every trip to the field I have made over the years I witness cattle inside poorly maintained exclosures or sign that they have been there.  I also routinely witness water troughs that completely fail or that leak onto the ground creating a stinking, muddy, manure and urine filled mire that is ideal habitat for West Nile Virus infected mosquitos and pollute other surface waters and groundwater.  These same troughs also lack the required bird escape ladders and sometimes are filled with dead wildlife. 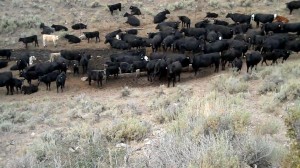 The report does admit that the absurdly low grazing rates “creates an incentive to use federal forage before using other forage sources and perhaps to use federal grazing allotments more intensively than privately owned rangeland.”  This is clearly evident when you visit many western grazing allotments.  Often, private rangelands are in considerably better condition than our public lands, especially in drought years when permittees often increase their use of public lands except for the rare case when the BLM recognizes the drought conditions.  Even then, since there is a large discrepancy between the number of AUMs permitted and the actual number of AUMs used, any cuts to grazing during drought years are only imaginary and use increases over previous years anyway.  This phenomena is occurring this year in parts of Idaho where the BLM and the USFS have failed to make any significant cuts to grazing during a severe drought.

The public lands grazing program among all agencies, according to a General Accountability Office report, cost $144 million in 2005 and received only $21 million in grazing fee receipts.

In contrast, compare the economic benefits to recreation, an activity, generally, that is far less damaging to landscapes and habitats than livestock grazing.  Recreation supports 372,000 jobs and contributes $45 billion to the economy.  Arguably, livestock grazing greatly reduces the value of a landscape for recreation.  With polluted water, degraded wildlife habitat, hundreds of thousands of miles of barbed wire fence that tear clothes, gates that are nearly impossible to open and close, predator killing to protect livestock, aggressive guard dogs, and many other impacts, livestock grazing eliminates or detracts from the value of the landscapes that would otherwise support much more wildlife and unhindered recreation.

When you compare the economic values of one activity over another and then compare the undue political influence that welfare livestock interests have over everything else, it is clear that livestock grazing on public lands is out of place with modern values.  The federal agencies that manage livestock grazing on public lands are failing to properly manage livestock and ranchers have subdued them from doing so at the taxpayers’ expense.

The report has a curious error though.  A chart contained in the appendix shows the inflation adjusted grazing fee but calculates the value in 2012 dollars incorrectly.  Here is the correct data with additional years and data for the USFS which is part of the Department of Agriculture not the Department of Interior.

44 Responses to BLM Public Lands Grazing Accounts for Only 0.41% of Nation’s Livestock Receipts